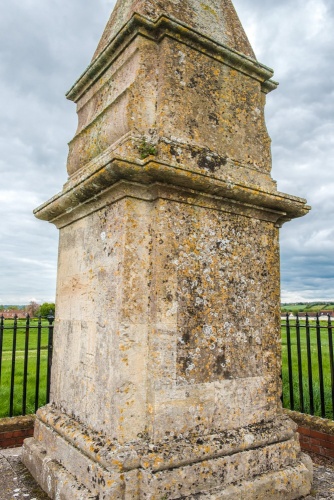 On the north bank of the River Tone, 4 miles south-west of Bridgwater, lies the site of Athelney Abbey, founded by Alfred the Great. The Abbey site occupies a pair of low hills separated by a shallow depression. When Alfred came here in the 9th century to escape his enemies the two hills were surrounded by marshes, turning the hills into remote islands, inhospitable and only accessible by boat during the winter months.

The Athelney marshes were regarded as impassable, and 'a great swamp'. Not a pleasant place to live but the perfect place for Alfred to recover from his military losses and plan his next move.

The well-known tale of Alfred and the Griddle Cakes comes from his time at Athelney. The most popular version of the tale says that Alfred was travelling in disguise to escape the Danes, and he sought shelter with a poor peasant woman. The woman did not recognise the king and bid him look after her griddle cakes while they cooked on the fire so that she could go out and gather firewood.

The king agreed, but, lost in his thoughts, he let the cakes burn. When the woman returned she, not unnaturally, scolded the king, who had the grace to be suitably abashed. The story is very likely a later invention. There is no contemporary record of the story, and the first written account does not occur until well over a century after the alleged events. 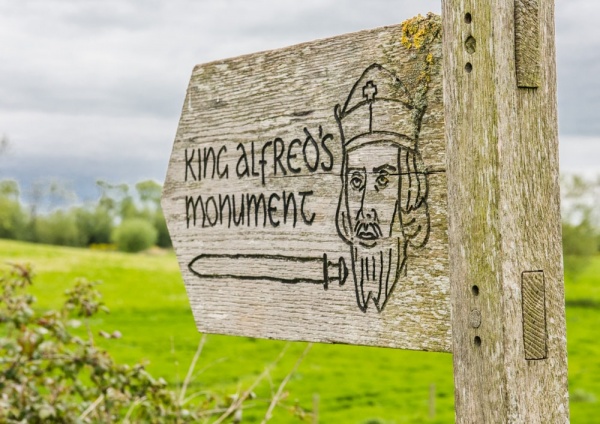 It was to these remote islands at Athelney that Alfred came in AD 877 to escape from the Danes who threatened to overrun his kingdom. Alfred stayed at Athelney from the autumn of 877 until the spring of 878 when he had a fortress built here named Ethelingaeigge. One translation of the name is 'AEthelinga ieg', which may mean 'Island of the Princes', suggesting that the island already had links to the royal family of Wessex before Alfred's time.

Here Alfred reorganised his forces and prepared to launch an offensive that culminated in his pivotal victory at the Battle of Edington.

Archaeological investigation has revealed that Alfred's island was linked by a causeway to East Lyng. Both ends of the causeway were defended by a timber palisade and earthworks. The ditch on the island end predates Alfred and was probably built during the Iron Age. That suggests that there had been an existing Iron Age fort on the island. Alfred must have been aware of the fort, which would have been ancient by that time, and strengthened it to suit his purposes.

About a decade later, around AD 888 Alfred founded a monastery at Athelney beside the earlier fort (another interpretation of events is that he enlarged an already existing monastery at this time). This monastery was dedicated to Our Blessed Saviour, St Peter, St Paul and St Athelwine and was meant to commemorate his victory and give thanks to God. Due to the marshy ground, it appears that the Abbey foundations were built on timber piles.

Our knowledge of Alfred's time at Athelney comes from the writings of Bishop Asser of Sherborne, who came here later as Alfred's chaplain. Asser describes the Isle of Athelney area as a morass surrounded by reeds and marshes, a place where the only reliable form of transportation was a flat-bottomed punt, which could navigate the channels that changed course with every rainfall and a place susceptible to sudden floods. 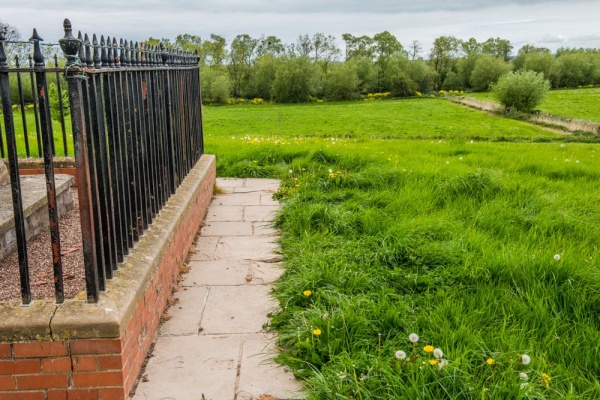 The Abbey site from the Monument

Asser also gives several fascinating stories about the early years of the Abbey. He says that many of the monks came from Gaul, and were not best-suited to accept the strict discipline of John, the first abbot. Asser tells of a deacon and priest who decided to kill the abbot when he knelt by the altar for his morning prayers, then carry his body in secret and deposit it by a house of ill-repute to be discovered. The abbot was made of stern stuff, though, and fought back, raising such a noise that the other monks hurried to save him. His assailants were captured and imprisoned.

Athelney Abbey was converted to a Benedictine monastery around AD 960. It was never a rich monastery; the 12th-century writer William of Malmesbury says that the monks were few in number and poor. At the time of the Domesday Book, the abbey was a daughter house of Glastonbury Abbey.

During the medieval period, Athelney seems to have acted as a retirement home for royal servants. In 1304 there were two retired servants of the king in residence and complained when the king sent another. In 1325 the abbot received a request from Edward II to accept John de Blebury, and two years later William de Rainton, the king's yeoman, arrived demanding to be offered a place.

But not every demand on the Abbey's resources was from the king. In 1314 the Bishop of Lincoln sent William de Walton, a monk of Peterborough, with a letter asking that William, a monk of Peterborough, be placed in fetters and kept in a separate cell at Athelney due to his wickedness and disobedience. Five years later an exasperated Bishop Drokensford of Wells wrote back, saying that Walton had twice escaped from his fetters, and caused a great scandal at Athelney, and must go back to his own abbey.

In 1349 the Black Death came to Athelney. The abbot died on 23 September and just a month later his successor was also struck down.

The Abbey was dissolved by Henry VIII in 1539, and the Abbot received a pension of 50 pounds. The last monks of Athelney then built the nearby church of East Lyng. The famous Alfred Jewel was found at East Lyng. This highly decorated bejewelled ornament bears a Latin inscription that translates as 'Alfred had me made'. It was probably used to adorn the head of a pointer, a rod used to trace lines in a manuscript while reading. It is now in the Ashmolean Museum in Oxford. 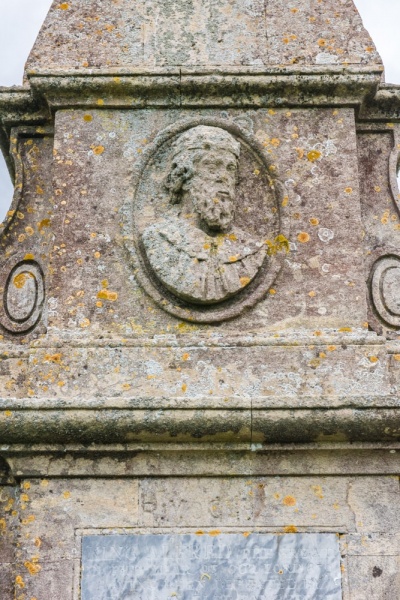 Alfred the Great bust on the Monument

A 19th-century monument stands on top of the island. The Athelney Monument was erected in 1801 by Sir John Slade to mark the site of Alfred's abbey. It stands over a stone vault discovered in the later 18th century.

Excavations around the site of Alfred's Monument revealed medieval encaustic tiles, which are now at the Somerset Museum in Taunton. An investigation in 1802 found evidence of the Abbey church, with tiles, a pewter dish, and plaster glass.

The monument has an oval medallion with a bust of King Alfred above an inscription that reads:

King Alfred the Great in the year of Our Lord 879 having been defeated by the Danes, fled for refuge to the Forest of Athelney, where he lay concealed from his enemies for the space of a whole year. He soon after regained possession of his throne, and in grateful remembrance of the protection he had received under the favour of Heaven, erected a monastery on this spot and endowed it with all the lands contained in the Isle of Athelney to perpetuate the memorial of so remarkable an incident in the life of that illustrious prince this edifice was founded by John Slade, Esq. of Mansel [Maunsel House], the proprietor of Athelney Farm and lord of the manor of North Petherton'. 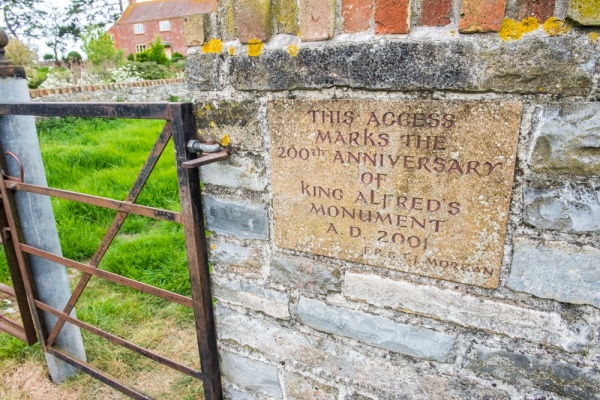 The popular Channel 4 television series Time Time excavated at Athelney Abbey for the show's very first episode in 1994. Their mission for that dig was to find evidence of what the settlement here looked like at the time of Alfred the Great, and to see if they could find Alfred's abbey and fort. The Time Team crew returned to Athelney Abbey to mark the 100th episode of the series in 2003.

The archaeologists found evidence of occupation on the western hilltop, with ditches that had been partially filled with remains of iron-working. Iron slag, a byproduct of metalworking, was found, suggesting that Alfred manufactured weapons here to equip his army. They also found the Abbey church location and several nearby buildings that presumably formed part of the medieval monastic complex. 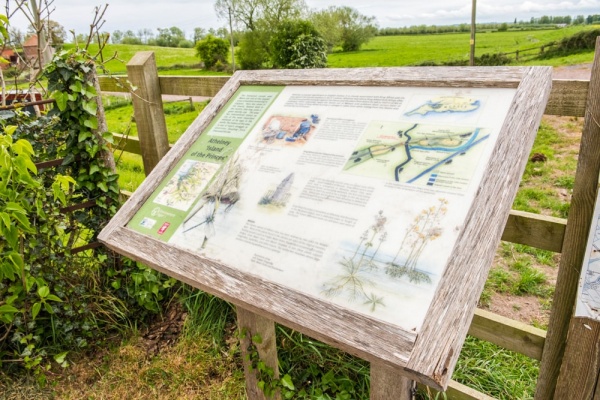 Information panel with the Abbey site in the background

Access to Athelney Abbey is straightforward. The Abbey site lies on private ground but there is public access and signposts off Cuts Road, immediately west of the bridge across the River Tone off the Burrowbridge to Curload Road. There is a useful information panel at the start of the footpath beside the river. Please be respectful of the private land, and if you see someone at Athelney Farm it would polite to ask permission to make the short climb to the monument.

When you reach the top of the Isle of Athelney where the monument stands there is very little to see above ground. You can, however, make out the general shape of the site and traces of the causeway heading towards East Lyng. The causeway is much better seen from the far end nearest the village.

What is most striking about visiting Athelney is seeing how low the ground is. It is easy to imagine what it would have been like when Alfred arrived here in AD 877; a land of marsh and wildfowl, a bleak landscape of waterways and reeds, a place to hide and regain his strength. And from this marshy place, he launched the assault that drove back the Danes and changed the course of history.

More self catering near Athelney Abbey