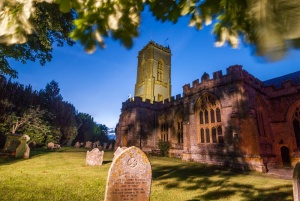 There was a church at Curry Rivel before the Norman Conquest, as the Domesday Book of 1086 makes reference to an existing church. However, of that Saxon building, there is no trace.

In 1251 the de Lorty family gained possession of Curry Rivel manor, and it was Sabina de Lorty who was responsible for the north chapel, the earliest surviving part of the current church. This Sabina was the last of the line of the Revel family from whom the village of Curry Rivel takes its name. The manor of Curry Rivel later passed to the Montacute family, and still later, to the earls of Somerset.

The church is largely Perpendicular in style, built from a mixture of blue lias and Ham Hill limestone. The exterior boasts some wonderful grotesques (not gargoyles, for they do not sport water spouts).

In this region of Somerset, grotesques are usually called hunky-punks, and Curry Rivel has a wonderful collection, among them figures of a fiddler, a piper, a dog, and a man playing the bagpipes. The south porch is a very fine two-storey structure with a parvise, or priest's room, above the door.

The imposing tower was rebuilt in 1861, with the addition of pinnacles, but only 14 years later one of the pinnacles fell off and crashed through the roof of the south aisle. As a precaution, the remaining three pinnacles were removed. 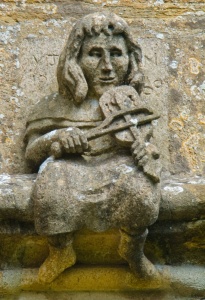 A 'hunky punk' or
grotesque, depicting
a man playing a fiddle

As for the interior, the nave is mainly 15th century, with slender columns and some fine carvings around the chancel and tower arches. The 16th-century pews boast some very nice carved panels and poppy heads. The north aisle still has its original wooden roof.

The parclose screens, separating the aisles from the north and south chapels are beautifully carved, and probably earlier than many similar screens in Somerset, dating to the 15th century. The north chapel is the oldest part of the church, originating in the 13th century. There is a large tomb set against the north wall, thought to be that of Sabina de Lorty, founder of the chapel.

A tomb thought to be Sabina's grandson, Henry de Lorty II, is also in the chapel. There are also three small carved effigies, thought to represent de Lorty's three children. A 14th-century piscina is set in the south wall, and there is a carving of a priest's head projecting from a window ledge though to date to 1275.

The most imposing monument in St Andrews is to be found in the chancel. This grand tomb is to the memory of Marmaduke Jennings and his son Robert. The former died in 1625 and the latter in 1630. The effigies of the two men are beautifully made and portray them as troopers wearing jackboots and jerkins.

The tomb is surmounted by a slender, coffered canopy arch, adorned with cherubs. There are two old chairs in the sanctuary; one, carved with tulips, foliage, and a fleur-de-lys, dates to 1441. 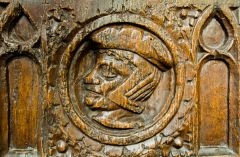 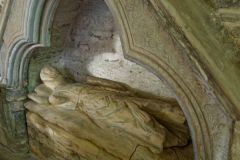 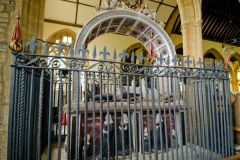 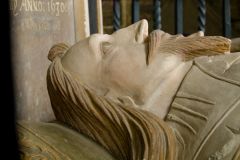 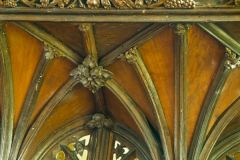 More self catering near Curry Rivel