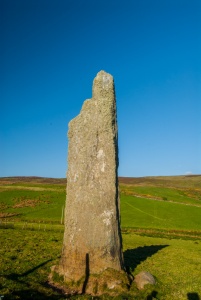 Atop a steep escarpment looking out over the Sound of Ghiga is a solitary standing stone, erected during the Neolithic period. The Beacharr stone is the tallest in Kintyre, standing just over 5m tall (about 16.5 feet).

The stone is about 1.4m wide at the base and 0.8m thick. The top is very irregular, with a series of steps from south to north, but it isn't obvious whether the odd shape is natural or worked by hand.

Antiquarian Alexander Thom, writing in 1971, hypothesised that the stone was a lunar observatory, erected in the 1st millennium BC.

Writing in 1762, the minister described the Beacharr stone as 'a curious monument of the knowledge which our forebears must have had of the mechanical powers', which in modern language translates loosely as, 'how on earth did they manage to erect this large stone!'

Near the standing stone are the scattered remains of a chambered cairn. The Beacharr cairn is famous in archaeological circles as the place where domestic Neolithic pottery was first recognised and classified. The pottery from Beacharr is on display in the Campbeltown Museum. The pottery features a distinctive rounded base.

Could the standing stone have been erected to serve a ritual purpose related to the cairn? Or was the cairn erected near an existing sacred site signified by the stone? It's an intriguing mystery. One thing that isn't a mystery is the stunning view from beside the stone. The land falls away sharply to the west and slopes down to the south, giving quite amazing views, especially on a sunny summer evening! 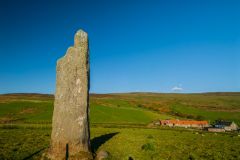 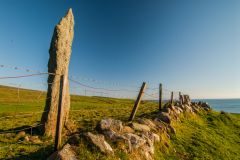 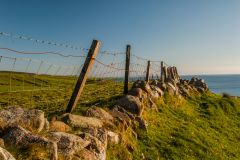 About Beacharr Standing Stone
Address: A83, Killean, Argyll and Bute, Scotland, PA29 6XF
Attraction Type: Prehistoric Site
Location: Off the A83 south of Killean. The stone is on top of a steep hill, overlooking Beacharr Farm. Open site, but a steep climb up the hill from the main road. Nearest postcode is PA29 6XF
Location map
OS: NR692433
Photo Credit: David Ross and Britain Express

Nearby accommodation is calculated 'as the crow flies' from Beacharr Standing Stone. 'Nearest' may involve a long drive up and down glens or, if you are near the coast, may include a ferry ride! Please check the property map to make sure the location is right for you.