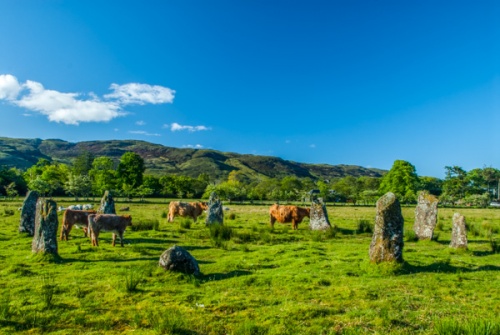 This small stone circle is the only one on Mull and stands in the grounds of Lochbuie House, in a breathtakingly beautiful setting, under the watchful gaze of Ben Buie. The circle probably dates to the late Neolithic or early Bronze Age. 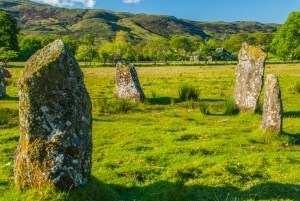 Standing stones on the circle perimeter

There were originally 9 stones, all of local granite. One of the stones has been replaced by a low boulder. The circle is about 12.3 metres in diameter, with the tallest stone about 2 metres high and the smallest about 1.2 metre high. Interestingly, the standing stones have been placed so that their flattest side faces the interior of the circle.

There are three outlying stones, one about 5 metres from the circle to the south east. This is a fairly unobtrusive boulder about 1 metre high. The second outlier is a very striking stone about 3 metres high, standing at least 40 metres to the south west. Much further away (about 110 metres) is the third outlier, which is roughly 2 metres high. This stone looks like it has suffered a break near the top and was probably much taller when it was first erected.

What purpose do the outliers serve? We can only guess, but one possibility is that they indicate a particular line of sight at a certain time of year, possibly related to the position of the sun. 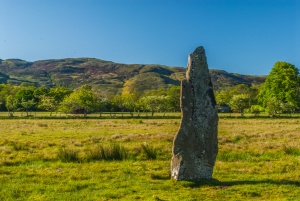 One of the outlier stones

Take the Lochbuie road off the A849 southwest of Craignure. There are more direct routes, but the easiest way to reach the stone circle is to park at the beach, and follow the path along the shore, behind Lochbuie House until the circle comes into view in a field. When I visited in the early morning there were cows in the field, but there were happily grazing and paid no attention to me at all.

This is an absolutely magical location; easily one of the most beautiful settings for an ancient site anywhere in the British Isles. All of Mull is spectacular, but the setting for the stone circle is surreal in its beauty.

About 400 metres away, on the shore, stands 15th-century Moy Castle, stronghold of the Maclaines. 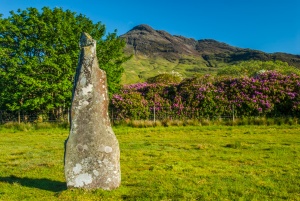 The outlier and Ben Buie 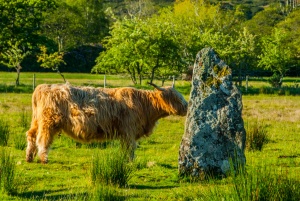 Highland cattle amid the stones 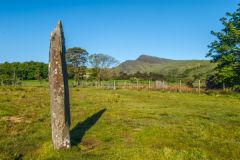 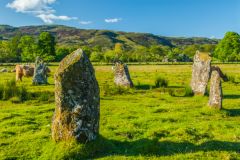 Nearby accommodation is calculated 'as the crow flies' from Lochbuie Stone Circle. 'Nearest' may involve a long drive up and down glens or, if you are near the coast, may include a ferry ride! Please check the property map to make sure the location is right for you.