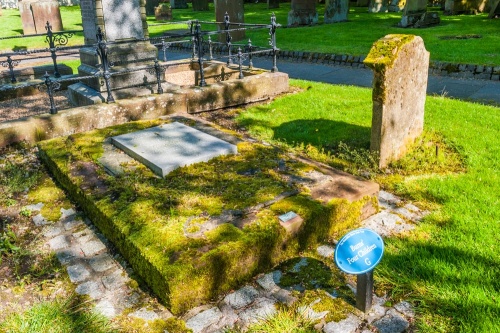 The Ayrshire town of Mauchline and the story of poet Robert Burns are inextricably entwined. It was here that Burns met and wooed his wife Jean Armour, and here that they lived together in the building that now serves as the Burns House Museum.

Here, too, is the graveyard of St Michael's Church where several of the couple's children lie buried, along with the poet's brother and many of his friends and local people immortalised in his poems.

The first church in Mauchline was erected in the 13th century and was dedicated to St Michael. The land on which the church stood belonged to Melrose Abbey. The medieval church was pulled down in 1827 to make way for the present building. It was the 13th-century building that Robert Burns would have known. 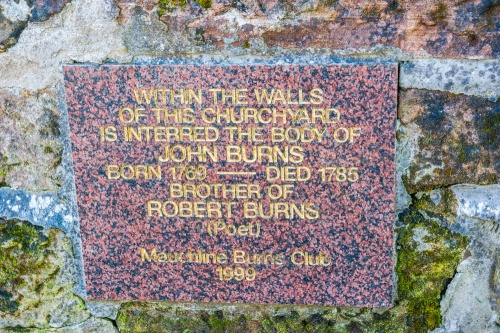 Burns lived in Mauchline from March 1784 - November 1786 and during that time he wrote some of his best-loved poems, many of them incorporating the friends he made locally.

Many of these friends and characters from his poems lie buried in the old graveyard near the Parish Church. The Mauchline Burns Club has placed blue plaques beside many of the gravestones as part of a Burns Trail. For anyone interested in Robert Burns a tour of the churchyard is like meeting old friends.

Marked C on the cemetery trail is the grave of Willie Patrick, a herder and servant at Mossgiel. Patrick was proud of his links to the Burns family and published his memoirs recounting that connection n 1881. Then there is D, the grave of Laird McGaun, known to Burns as Master Tootie. In a poem to his patron Gavin Hamilton, Burns called McGaun a 'knavish cattle dealer'.

Marked F on the Trail is the touching grave to four of Burns' children. Three of the children tragically died in infancy, a reminder of the high child mortality rate in the 18th century. The fourth child, Elizabeth Burns, died at Mosgiel in 1795, aged just 3 years old.

Marked G on the trail is the tomb of James Humphrey (1755-1844). Humphrey was brought to life in the poem 'Epitaph on a noisy Polemic'. He was always on the lookout for a handout and would introduce himself to visitors with the phrase, 'Please sir, I'm a bletherin' bitch'. 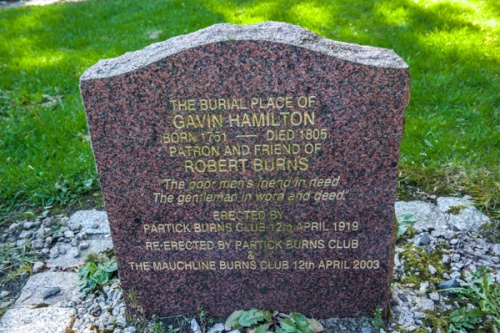 Marked by the letter I on the trail is the grave of James Whitefoord, the son of Sir John and Lady Whitefoord of Ballochmyle. Sir John was one of Burns' early patrons and, like Burns, was a Freemason. Burns cast Sir John's daughter Mary Jane as the heroine of his song, 'Farewell to Ballochmyle'.

Another plaque marks the grave of John Richmond, one of Burns' friends, who served as a clerk for Gavin Hamilton, another of Burns' patrons. Richmond moved from Mauchline to Edinburgh in 1785 and when Burns moved to the city himself in 1786 he stayed with Richmond. Richmond later returned to Mauchline as a solicitor.

At K on the churchyard trail is the grave of Rev. William M. Auld, known to Burns as 'Daddy Auld'. Auld served as the Minister of Mauchline Church for 50 years before his death in 1791 and was widely respected.

Next on the trail at L is John Brown, a watch and clockmaker known to Burns as 'Clockie Brown' and mentioned in the poem, 'The Court of Equity'. 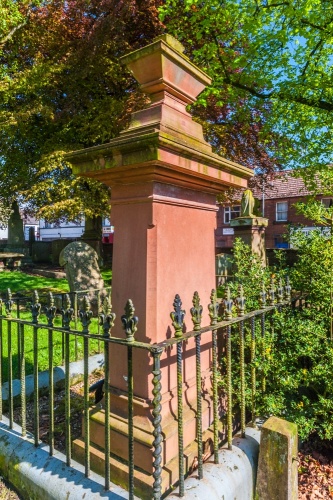 At M on the trail is a railed enclosure holding the graves of the Ballochmyle family. One of the family not buried here is Wilhelmina Alexander, the central character in Burns' poem, 'The bonny Lass of Ballochmyle'. She is buried in Glasgow.

At N on the trail are the Poosy Nansie graves. Here lie buried 'Black Geordie Gibson', his wife Agnes Ronald (Poosy Nansie) and their daughter 'Racer Jess'. Poosy Nansie was the landlady of an ale and whisky shop in Mauchline that acted as the setting for Burns' 'Jolly Beggars Cantata'. Another alehouse keeper in Mauchline was Nanse Tinnock, whose establishment on Castle Street was one of Burns' favourite haunts. Tinnock's grave is at Q on the trail.

Next along the trail at O is the grave of James Brydan, a farmer from nearby Welton who appears in the poem, 'The Court of Equity'. Against the churchyard wall is the grave of Dr Matt Stewart (1717-1785). Dr Stewart was a geometrician at Edinburgh University where his son Dugald was a Professor of Moral Philosophy. In 1786 Burns was a guest at Dugald Stewart's home in Catrine where he 'dinnered wi' a Lord' (in this case Lord Daer).

At R on the trail is the grave of Mary Morison. For many years she was regarded as the title character of the poem, 'Bonnie Mary Morrison', though more recent opinion is that the poem actually refers to Ellison Begbie (Peggy Allison). 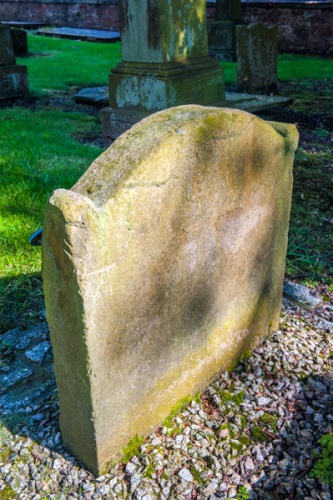 One of the most fascinating characters from Burns' time in Mauchline is William Fisher, whose tomb is at S on the graveyard trail. Fisher, dubbed by Burns 'Holy Willie', was a character in both 'Holy Willie's Prayer' and 'Epitaph on Holy Willie'. He was an ordained church elder but was publicly rebuked in Session for drunkenness in 1790. He was found dead in a snowy ditch in 1809.

At T on the trail is the grave of Robert Wilson, said to be the sweetheart of Jean Armour during the period when she and Burns were estranged. He was the subject of Burns' song, 'The Gallant Weaver'.

At U on the trail is the grave of Gavin Hamilton, one of the most important people in Burns' literary career. Hamilton was one of the poet's earliest and most influential patrons. Both Burns and Hamilton were Freemasons and 'New Lichts' (liberal thinkers in matters of religion). The epitaph on Hamilton's gravestone is taken from Burns' poem 'A Dedication to Gavin Hamilton, Esq.'

At W on the trail is the grave of James Hamilton, who served as a message boy at Mossgiel during Burns' stay. The poet once sent him with a message to Jean Armour with strict instructions to give the letter to no-one but Jean.

A modern plaque is set on the churchyard wall. The plaque commemorates John Burns, the youngest brother of Robert Burns, who died in 1786 at the age of 16 years. He was buried in an unmarked grave in the churchyard and the plaque was erected by the Mauchline Burns Club in 1999. 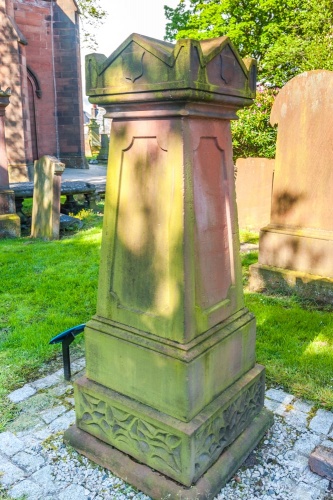 There is more to Mauchline's old graveyard than its Robert Burns connections. Also bearing a blue plaque is the grave of James Smith, a Covenanter who died in 1685 (though the gravestone wrongly bears the date 1684). Smith was shot while helping Covenanters imprisoned at Newmilns to escape. He was captured and later died of his wounds at Mauchline Prison.

At H on the trail is the grave slab of Andrew Noble, who served as the schoolmaster and Session Clerk of the church in Burns' time.

Then there is the tomb of George Julian Harney, the last surviving leader of the Chartist movement, who died in 1897. He was a strong voice for electoral and social reform throughout the Victorian period.

Set into the churchyard wall is the Burgher Kirk Stone. The stone was given in 1796 by a poor widow as a contribution for the Secession Church. It had served as the hearthstone of her house in Catrine. The Secession Church was pulled down in 1884 to make way for a new (North) church the following year. When the North Church, in turn, was pulled down in 1976, two date stones were rescued and built into the churchyard wall. 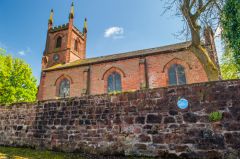 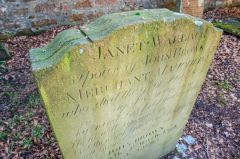 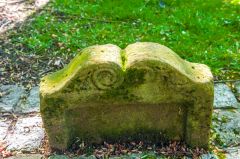 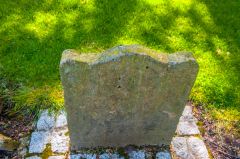 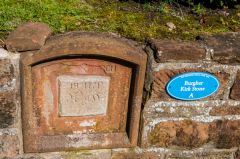 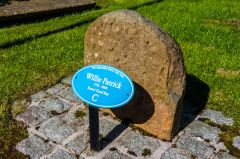 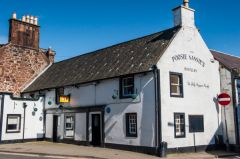 Nearby accommodation is calculated 'as the crow flies' from Mauchline Old Graveyard. 'Nearest' may involve a long drive up and down glens or, if you are near the coast, may include a ferry ride! Please check the property map to make sure the location is right for you.