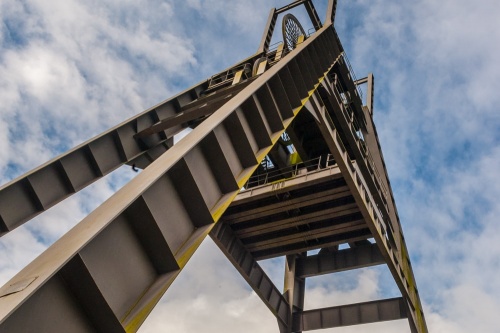 From 1907 to 1989 the Barony Colliery extracted coal from a pit at the Ayrshire village of Auchinleck. Today all that remains of the colliery is a huge pit-heading winding gear frame known as the Barony A-Frame. The winding gear frame has been restored and now serves as a lasting monument to the industrial heritage of the Auchinleck area.

The massive steel frame was built in 1954 and is one of just two examples of this type of frame ever built and the only one to survive. The history of the Colliery, however, goes back much further in time.

William Baird & Company sank the first pit at Barony in 1906 to supply coal to the Lugar Ironworks. The first coal was not extracted until 1912. The Baird Company owned three other pits in Ayrshire and had interests in the iron industry. The iron industry slumped in the 1920s and the company focused on coal. In 1931 they merged with the Dalmellington Iron Company to form Bairds & Dalmellington Ltd. The company owned Barony until the coal industry was nationalised in 1947.

In 1938 work began on No 3 shaft, intended to improve ventilation and increase output from 1500 to 250 tons per day. The outbreak of WWII delayed opening the shaft until 1950. The finished shaft was 2052 feet deep (635.4m), making it the deepest in Scotland. 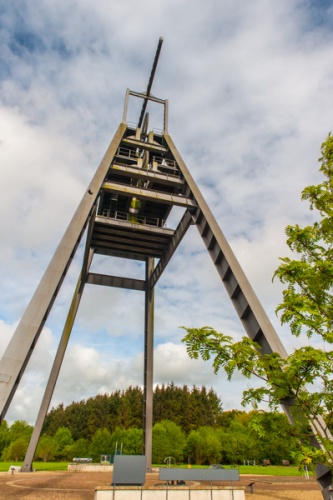 The A-Frame from below

The A-Frame was erected over this shaft. It held two sets of winding gear, used to raise coal and to transport miners up and down the shaft.

The importance of the Barony Colliery to the economy of the local area cannot be overstated; at its height, the colliery employed some 1200 people. Most of the local boys left school at the age of 14 and started work in the pits alongside their fathers. It was a case of finished school on Friday, and start down the mines on Monday.

The miners lived in rows of houses built by the mine owners. If you worked at the mine you got a house, though you still paid rent. If you could no longer work in the mine you lost your house. The houses were finally declared unfit for human habitation in the 1950s.

In 1957 a power station was built beside the mine, generating electricity by burning slurry from the coal-washing process. The station closed in 1983 and was demolished to make way for a chipboard manufacturing plant.

When Scottish Coal closed the colliery in 1989 all of the mine buildings were torn down except for the steel frame. The A-Frame stood alone in a desolate landscape, faced with demolition. And what is worse, the colliery had been the only major employer in the area, and its closure left Auchinleck and the surrounding area badly affected. 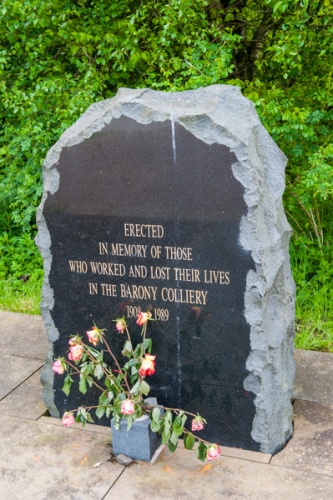 The memorial to dead miners

The A-Frame was saved from destruction by a local charitable trust set up in 1997 to save the site and create a monument to mining heritage and mining communities. It took over Â£1.3 million to restore the A-Frame and landscape the mine area. The restored site was officially opened by Prince Charles in his role as the Duke of Rothesay in 2008.

Inside the site entrance is a memorial to four miners who died in 1962 when Number Two shaft collapsed. The head frame then fell into the shaft opening, blocking the shaft and preventing rescue attempts. The bodies of Henry Green, George Wade, Thomas Fyvie and John MacNeil were never found. A plaque inscribed with the names of the four men is set into the ground beneath the A-Frame.

after the disaster, Nos 1 and 2 shafts were filled in, leaving just No 3 shaft. The final shaft could not operate without a ventilation shaft, so 1100 men were laid off for four years. A new shaft (No 4) was sunk and the mine reopened in 1966.

During the official opening ceremony of the restored A-Frame in 2008 Elizabeth Green, Henry Green's widow, told Prince Charles that she could see the A-Frame from her window, 'so every night before she went to bed she said good night to her Henry'. 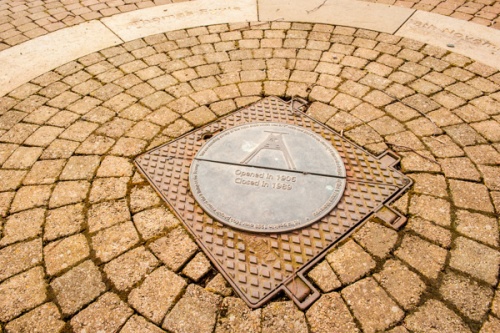 Plaque marking the main mine shaft

The charitable trust that restored the site has done an exceptional job telling the story of Barony Colliery. Apart from the A-Frame itself, there are interpretation panels around the site, helping to bring to life the story of the mine and the mining families that depended on it. There is a large scale model of the mine site as it would have looked in its heyday, with a collection of old photographs.

Information panels tell the story of the bitter miners' strike of 1984, which lasted a year and polarised mining communities around Britain. The contentious settlement that ended the strike was opposed by many miners at Barony. On principle, they refused to return to work on the Monday morning and did not come back to the pits until the following day. For this reason, they were dubbed 'The Tuesday Boys'. 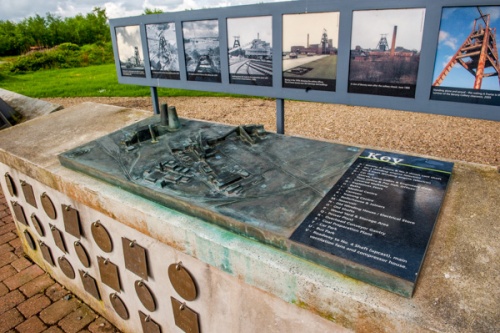 The scale model of the Barony Colliery

The site is enhanced with a Heritage Garden, designed as a memorial to all those who lost there lives here since the mine opened in 1906. The area under the A-Frame is paved with red and yellow bricks, emulating the original colours of the mine buildings. The A-Frame is floodlit at night, with the power drawn from a wind turbine.

Learn the story of Locomotive No. 19, which hauled coal trains between Dunaskin and the Doon Vallery collieries. In 1929 the locomotive was involved in a fatal accident resulting in the deaths of the driver and a workman. The locomotive was one of the last to work at Dunaskin before the line closed. It is on loan from the Scottish Industrial Railway Centre.

The charity has also launched 'Pitheid Patter', an oral history project preserving the stories of miners who worked at Barony and their family members.

Barony A-Frame is located on the B7036 between Auchinleck and Ochiltree. It is impossible to miss; the gigantic A-Frame dominates the skyline. There is a free parking area and the site is free to explore at any time.

Nearby accommodation is calculated 'as the crow flies' from Barony A-Frame. 'Nearest' may involve a long drive up and down glens or, if you are near the coast, may include a ferry ride! Please check the property map to make sure the location is right for you.

More self catering near Barony A-Frame