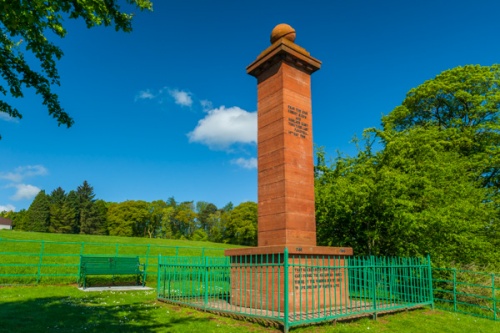 For dear to me, as light and life,
Was my sweet Highland Mary

On a hill above the Ayrshire village of Failford stands a monument marking the traditional last meeting place of poet Robert Burns and Mary Campbell, known to posterity as 'Highland Mary'. Mary Campbell was perhaps the great love of Burns' life (though he was a man who liked to spread his favours around).

The monument takes the form of a red sandstone column. It was erected in 1921 by the Burns Federation. The monument was paid for by the Harland and Wolff shipbuilding firm, who owned a shipyard in Greenock where Mary was buried. 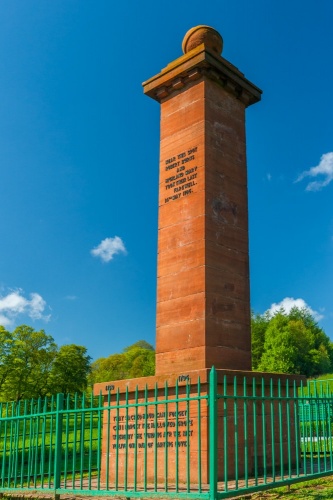 A closer look at the monument

The exact details of Robert Burns' relationship with Mary Campbell are unclear and made even more unclear by two centuries of romantic legend that grew up around the couple.

Mary Campbell was a native of Auchamore, near Dunoon, though she later lived in Campbeltown and Greenock. As a teenager, she moved to Mauchline in Ayrshire to work as a nursemaid in the home of Gavin Hamilton, known as Montgomerie Castle. She then moved to Coilsfield to work as a dairymaid.

It was during her time in Mauchline that Mary met Burns, who was at that time also courting Jean Armour, who would eventually become his wife. The exact sequence of events is unknown, but it is possible that Burns and Mary planned to elope to Jamaica together in 1786. It seems likely that the couple had exchanged Bibles and [possibly] a form of matrimonial vows.

Tragically, however, before the couple could embark on a voyage to the New World Mary Campbell contracted a fever, possibly while nursing her brother Robert, and died. She was buried in the old West Highland Churchyard at Greenock. In 1920 the graveyard site was needed for expansion of the local shipyard so the graves were moved to a new site. 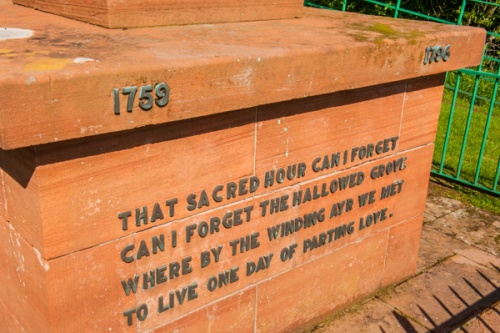 Burns' verse on the monument's plinth

When Mary Campbell's coffin was opened, a piece of a small infant's coffin was found within it. This prompted speculation that Mary did not die of fever but rather died in childbirth, presumably while pregnant with Burns' child.

Certainly, Robert Burns seems to have been consumed with sorrow and guilt. He mentioned Mary often in his private letters and wrote three poems to her. One of these poems was written on the third anniversary of her death and is known as 'To Mary in Heaven' (though Burns never gave it that title). In it, he penned the words:

See'st thou thy lover lowly laid?
Hear'st thou the groans that rend his breast?
We feel constrained to say, 'If this is not the language of remorse, what is it?'

These words were written when Burns had been married for 18 months to Jean Armour and certainly suggest that he was not only heartbroken but harboured guilt over Mary's death. 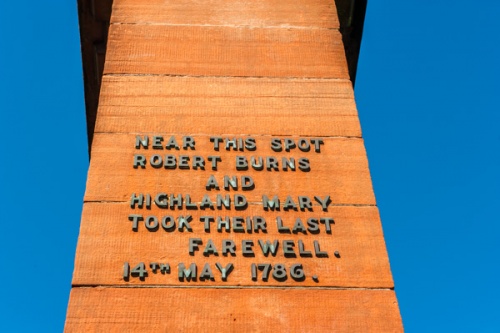 Commemorative inscription on the column

Whatever the exact nature of their relationship, during the Victorian period Mary became a romantic figure, an 'ideal maiden' imbued with a spiritual purity beyond reproach. That overly-sentimental vision of Mary Campbell may have been far from the truth, but that didn't stop her from becoming a symbol of virtue and the perfect woman to a sentimental Victorian audience.

The Monument is very easy to find. It stands above Failford village, off the B743. The Monument is reached via a flight of steep steps. The pillar is protected by an iron railing around the base. The column sits on a plinth inscribed with the words:

On the column itself are the words:

Note
Do not confuse Highland Mary's Monument in Failford with the statue of Mary Campbell at Dunoon, on the Cowal Peninsula in Argyll, or with the monument raised over her grave in Greenock.

Nearby accommodation is calculated 'as the crow flies' from Highland Mary's Monument. 'Nearest' may involve a long drive up and down glens or, if you are near the coast, may include a ferry ride! Please check the property map to make sure the location is right for you.