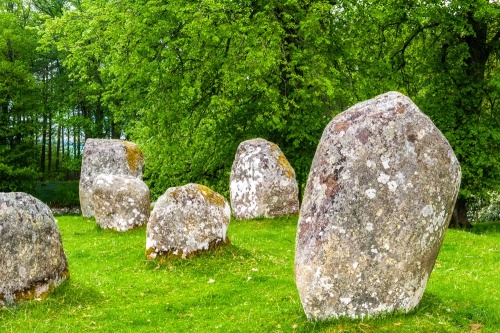 Croft Moraig stone circle (sometimes known as Croftmoraig) is a small arrangement of standing stones set in a farm field directly beside the A827, west of Aberfeldy. This remarkable site shows several different styles of Neolithic construction in one place, including recumbent stones, a graded arrangement of stones around a circle, a bed of quartz pebbles, a possible astronomical alignment, and an outer earthwork ring supported by a stone bank.

The stone circle at Croft Moraig is easily the most accessible of a number of sites along the Tay valley. The valley holds sites stretching from the Neolithic through the Bronze Age, a clear indication of just how important the Tay was as a transport route for ancient people.

The stone circle was excavated in 1965. The investigation concluded that the site was built in 3 phases. First was a ring of 14 timber uprights with a gap on one side, like a horseshoe. There was a single timber post just inside the opening, and 2 lines of 3 posts in the south-east that look like a ceremonial passage. At the centre of the horseshoe was a stone with remains of burnt bone beside it, perhaps suggesting a hearth. 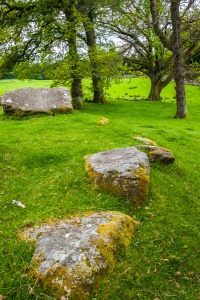 Recumbent stones on
the outer circle

The timber 'circle' was rebuilt with 8 standing stones in an oval shape, roughly 20 x 25 feet, within a 55 feet diameter bank reinforced by kerb stones. A cup-marked stone was set on the axes of these first 2 circles, in a place suggesting alignment with the Midsummer full moon.

The 8 stones in this second phase circle are graded in height, with the tallest in the SSW corner and the smallest in the NE. The smallest stone bears possible cup marks and may be aligned with the Midsummer sunrise.

The third phase of construction was a group of 12 standing stones in a circle about 40 feet in diameter, enclosing the first-phase horseshoe. This circle had an entrance in the south-east corner marked by a pair of huge outlying stones. Near this entrance were two graves. It certainly looks as if the main entrance shifted from the SW to the SE in the final phase, perhaps suggesting a change of belief system over time.

But when were the circles built? The only evidence comes from sherds of Neolithic pottery from the second phase of construction. This pottery has been dated to around 3000 BC. The three phases of construction may have been spread out over as much as 1000 years.

The site has suffered wear and tear over the years, and stones from both the second and third phases are missing or fallen. Part of the rubble bank has been scavenged for building material.

There is no dedicated parking area. What I did was to park on the verge along the farm drive, taking care to pull well away from the driveway entrance to allow farm vehicles to pass easily. 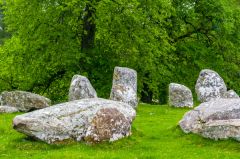 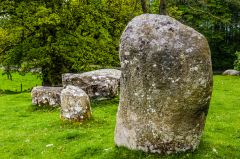