HERITAGE HIGHLIGHTS:   An ancient holy well at the Rock of Weem 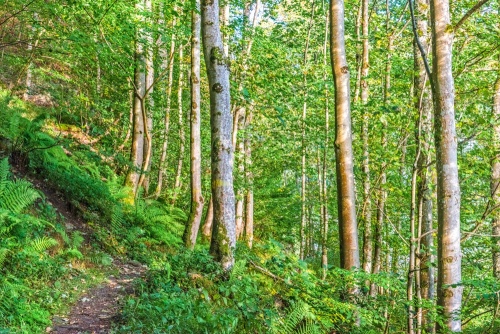 The Rock of Weem is a large outcrop of rock in the depths of Weem Forest, near Castle Menzies. Beneath the rock is an ancient well, or cistern, linked to St Cuthbert and a 14th-century son of the laird of Castle Menzies who left his worldly life and became a hermit here.

The forest surrounding Castle Menzies was established in the 19th century to provide a picturesque backdrop for the medieval fortress. The woods are full of specimen trees and form part of Perthshire's 'Big Tree Country.

Archibald Menzies was a famous botanist and plant-hunter, and he scoured the globe for exotic species to plant here at his family home. Among species introduced by Menzies is the South American monkey puzzle tree and the Douglas fir, introduced to Scotland by David Douglas around the same time.

Local legends tell strange tales of dragons who haunted the woodland and a Highland ballad tells the story of a girl imprisoned within the Rock of Weem by a demon. 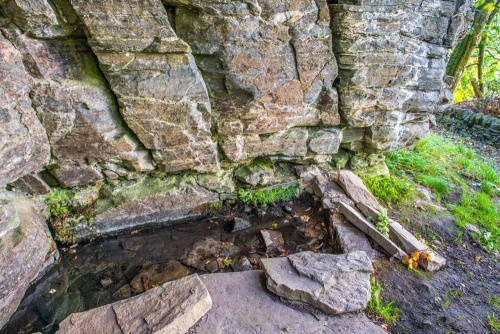 Sheltered by the overhang of the Rock of Weem is St Davids Well, a rectangular stone-lined basin set against the rock wall at one end and enclosed by a large, flat stone at the other. The well is roughly two inches deep with an outlet about 10 inches from the top.

But how did it get here?

Local tradition says that St Cuthbert established an oratory and a cistern at a place called Chapel Rock, where he erected a cross. The tradition identifies St David's Well as St Cuthbert's cistern.

Is there any truth to the story?

St Cuthbert is thought to have visited this area around AD 650 as part of his mission to spread Christianity, so the story could be based on real events, though there is no documentary evidence to prove or disprove it.

The saint is said to have established a monastic college at Dull, just west of Weem. He is also said to have immersed in the well at night to pray. That must have been very difficult unless it was quite considerably deeper in those days, or perhaps Cuthbert simply stepped into the basin and let the water cover his feet. 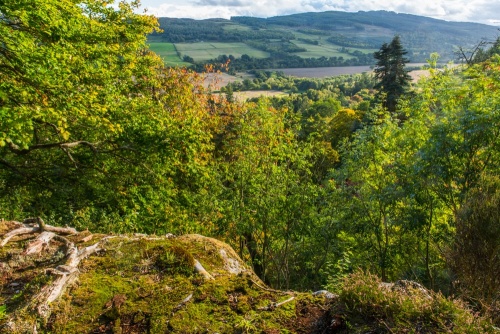 A rather fanciful legend says that a princess accused St Cuthbert of seducing her. The saint prayed for the earth to swallow her up, which duly happened. Naturally enough this infuriated the princess' father, and Cuthbert was forced to flee for his life.

The name 'Weem' comes from the Celtic uaimh (or uamh), meaning cave. Could the village have grown up near a cave already considered sacred because of its links to St Cuthbert?

The name almost certainly refers to Sir David Menzies (1377-1449) of Castle Menzies. Sir David gave up his position to become a Cistercian monk and later served as the rector of Weem. In 1440 he decided that he was tired of 'worldly things'. He resigned his post and is said to have lived the last years of his life as a hermit at the Rock of Weem. There he established a chapel known as Craig-an-Teuapail (or Creag an t-Seapail) and restored St Cuthbert's well.

In the Old Kirk of Weem are two fragments of an ancient cross shaft said to have been discovered near St David's Well. A tradition says that this cross once lay in front of St David's Well and that pilgrims would kneel on the cross while saying a prayer. More recently visitors treated it as a wishing well, putting buttons, pins, and the occasional penny into the well waters when asking for a wish to be granted. 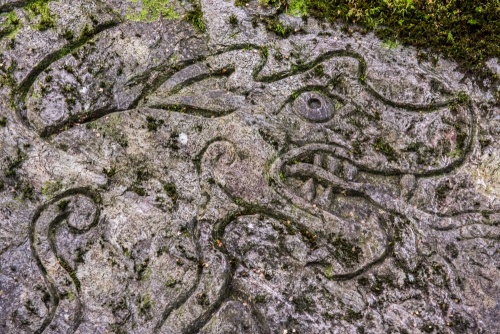 The carved figure of a dragon on the Weem Forest Walk

When the recess, or cave under the Rock of Weem was investigated in the late 19th century a number of bones were discovered. Immediately before you reach the well you will see a large cross carved into an exposed rock face. The carving is modern, but it seems entirely appropriate given the history of the site.

Access to Weem Forest is very easy. There is a free parking area just off the B846 just one mile north-west of Aberfeldy. From Aberfeldy, cross General Wade's Bridge over the River Tay, go through Weem village and take the right turn signposted to Castle Menzies. The drive splits in two, the left fork continuing to the castle and the right fork taking you to a parking area for Weem Forest. There is a useful information panel with a map at the parking area.

The route to the Rock of Weem and St David's Well is 1 mile (1.6km) return and takes roughly 60-90 minutes. The way is well signposted with colour-coded posts. The trail zig-zags up the hillside and turns right at a junction of forestry roads before it skirts an exposed crag with a tree jutting out from the rock. The trail emerges on top of the outcrop where there is a level area with wonderful views across Strathtay. 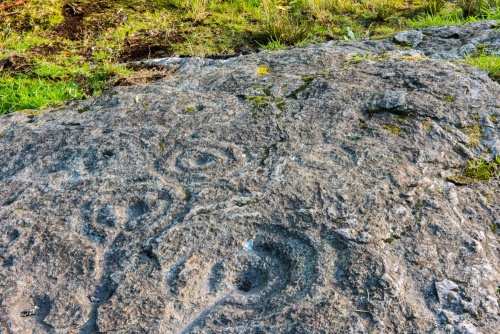 A cup and ring-marked rock near the viewpoint

Look for the modern cup and ring mark carvings incised into several rocks near the viewpoint. Though the carvings are recent, they represent the numerous prehistoric carvings found in Strathtay (for example, the Moness Cup-Marked Stone at Aberfeldy).

The trail continues on from the rocky viewpoint to the Rock of Weem and St David's Well. You can retrace your steps or continue on past the Well and the trail eventually loops around to create a circular walk, bringing you back just above Weem village. I recommend taking this route as it takes you past several exposed rock faces carved with figures from ancient stories about the forest.

Weem Forest is part of the Tay Forest Park. You will also sometimes see it referred to as Weem Wood, but we're going with Weem Forest since that is the name used by the Forestry Commission. 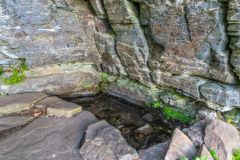 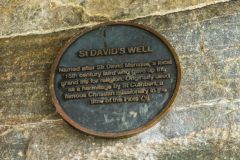 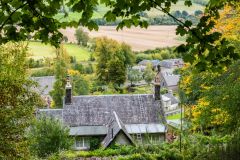