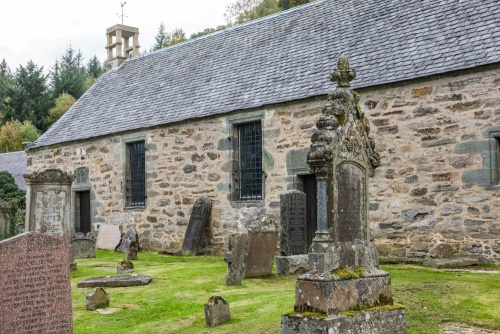 Sometime around 1488 Sir Robert Menzies, laird of Castle Menzies near Aberfeldy, built a church at Weem, just east of his ancestral home. An alternate version of events suggests that the church was built by John Menzies, the Clan Chief, after he was granted the Barony of Weem in 1451.

The church was used for worship until 1839 when it was replaced by the present parish church a short distance to the east.

The church was no longer used as a place of worship but it continued in use as the Menzies family mausoleum. It holds a wonderful collection of Menzies family tombs dating back to the 16th century as well as several ancient crosses and cross-slabs going back to at least the 8th century. 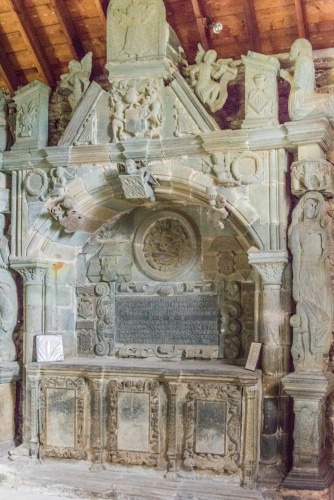 According to tradition, the first church at Weem was established by St Cuthbert around the year AD 650. Cuthbert founded an oratory and cistern at Chapel Rock (the Rock of Weem) above the village. The site was restored by Sir David Menzies around 1440 when he retired to live as a hermit there. The site was later renamed St David's Well after Sir David.

The first written record of a church at Weem comes from 1235, when Ween was described as a parish. The church was under the patronage of the Earls of Atholl until 1464.

The early medieval building was replaced by the present building around 1488 by Sir Robert Menzies, the 8th Chief of Clan Menzies. Menzies family members were buried at Weem church from at least the 15th century. The church was altered in 1609 and again in the 18th century.

Given its links to St Cuthbert, it is not surprising that the kirk was originally dedicated to him, but it was later referred to as St David's Church after Sir David Menzies (though he was never canonised). Neither dedication is used today and the church is simply referred to as the Old Kirk of Weem. 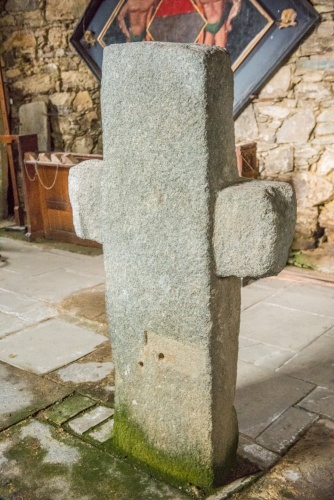 There are beautifully carved lintels over both the east and west doors on the south wall, both bearing heraldic symbols. Both doorway lintels bear the initials AM and MC for Alexander Menzies and his third wife Marjorie Campbell.

Alexander Menzies also built an extraordinary monument against the north-east wall inside the church. The monument does not commemorate one person but the whole Menzies family and their heritage. The memorial is dated 24 January 1616.

The florid inscription is a testament to Alexander Menzies' pride in his ancestry:

Praise to the best and greatest God.

To the shade and memory of illustrious and most noble
Hero Alexander Menzies of Weem
And to the memory of Campbell, his wife,
Who for the good name of their ancestors and for posterity
Built this monument.

The detail of carving on the memorial is simply stunning. It is easily one of the most impressive historical memorials in Scotland. 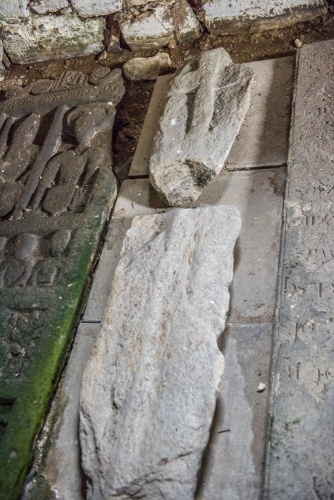 Beside the Menzies Memorial is a marble bust of a woman in a niche. This appears to be Victorian though there is no inscription that we could see. Set on the floor just east of the memorial is a beautifully carved stone slab to an unknown late medieval knight and his lady. The couple is shown above their 8 children and a skeleton and hourglass, signifying mortality.

An aumbry (stone cupboard) set into the south wall bears the initials DM and JL for Duncan Menzies and his wife Jean Leslie, who were married in 1623.

The walls are lined with Menzies funeral hatchments. These heraldic panels were carried at funerals and usually displayed outside the deceased home for a year before being brought inside the kirk for preservation. They provide a wonderful genealogical record of the Menzies family. 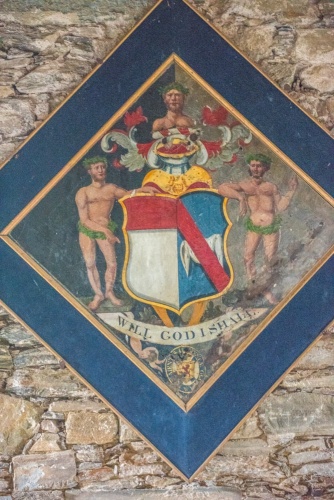 One of the Menzies family funeral hatchments

Inside the church are two large sandstone crosses brought here from the village of Dull, a few miles to the east. They were part of a series of four stones that marked the sanctuary boundary of a Celtic monastery established by St Cuthbert. One of the other two stones can still be found in the village centre.

The smaller of the two stones, known as Dull 12, stands 1.16m high, with a width across the arms of 0.83m. The shaft is 0.45m wide and 0.15m deep. The upper arm and part of the central boss are missing. The central stub was chiselled away to create a flat surface sometime after 1850.

The pair of stones were used as gateposts at Camserney Cottage, home of the Castle Menzies factor, before they were moved into the Old Kirk in the 19th century. You can still see damage on both crosses from their use as a gatepost.

Much more worm than the Dull crosses is a cross-slab known as Weem 1, thought to date to the 7th century. This irregular sandstone slab is carved with a cross in relief. This is missing the lower part of the cross-shaft and the base. 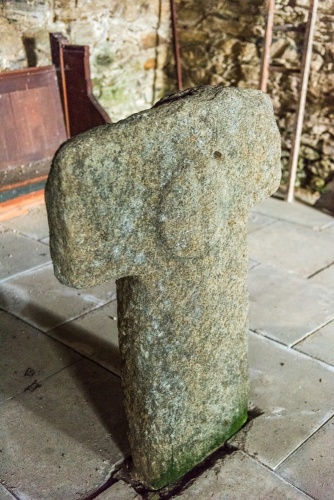 Also inside the church is Weem 2, a cross-slab dating to the same period (7th or 8th century). This is in poor condition with a broken top. A cross known as Weem 3 is outside in the churchyard to the south of the kirk. This may be the fourth stone from the Celtic monastery at Dull, mentioned above.

Against the south wall near the door is a weathered stone basin from the early medieval period. This has been carved from a boulder and probably served as a font.

Lying prone on the floor at the east end of the church is a broken cross known as St Cuthbert's Cross. This used to stand on the hillside above the kirk near St David's Well on the site of the 7th-century oratory established by St Cuthbert.

On a window ledge near the door is a display of small objects discovered during restoration work on the Old Kirk. Among the items are two coins from the reign of George III, an early 17th-century clay pipe, a late 18th-century button from the tunic of an army staff officer, and pins used to attach paper 'tears' to the velvet of funeral hatchments. 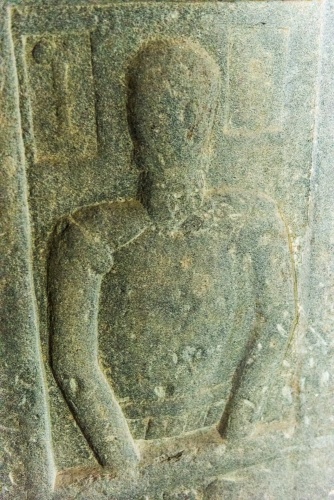 The Old Kirk of Weem is located on the B846 1 mile north-west Aberfeldy. There is a free parking area by the new church at the east end of the village and a very short stroll from there to the Old Kirk, just before you reach the Weem Inn.

Please Note:
The Old Kirk is usually kept locked but you can get a key from Castle Menzies during normal castle opening hours. You will have to leave a security deposit for the key (when we visited the requested deposit was 20 pounds, but of course we got that back when we returned the key). Admission to the Old Kirk is included with normal admission tickets to the castle.

Also, it is worth noting that there is no lighting inside the Kirk. On a dull day that can leave the church interior quite dim. If you want to examine the Menzies tombs or the ancient crosses on a dull, overcast day you might want to consider bringing a torch with you. In my case taking photos inside the church was very awkward until the sun came out briefly and the interior brightened. 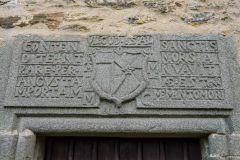 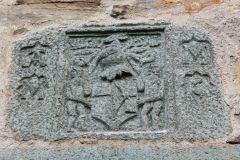 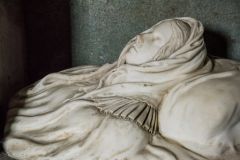 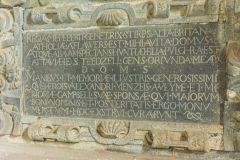 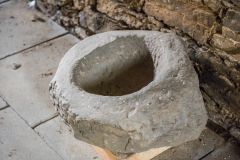 More self catering near Old Kirk of Weem

More bed and breakfasts near Old Kirk of Weem