Dull Cross (the Cross of Dull) 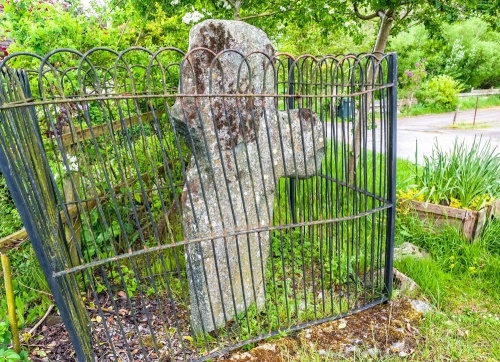 A few miles west of Aberfeldy, on the north bank of the River Tay, lies the hamlet of Dull. The hamlet's unusual name has nothing to do with uneventful or boring but may come from the Gaelic term for a meadow. A single road loops through the village from the B846, and at the point where the road turns south to rejoin the B846 is an ancient cross protected by an iron railing.

This is the Dull Cross, an 8th-century cross that probably formed part of a monastery established by St Adomnan (c. 624-704). Adomnan was an Irish cleric who served as the Abbot of Iona from 679-704. He most famously authored a biography of his cousin St Columba and the 'Law of Adomnan', which sought to ensure the safety of non-combatants in war.

The cross stands 1.76m (about 3 feet) high and is missing its northern arm. The southern arm is intact and terminates in a roughly triangular shape. 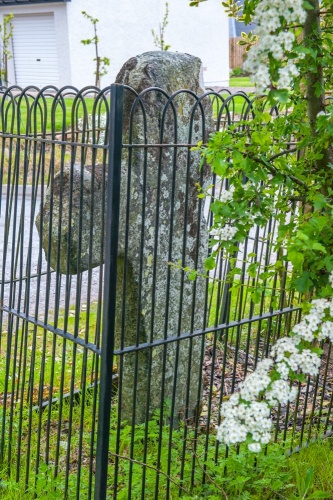 The cross from the rear

Sometime around the end of the 7th century, St Adomnan, the Abbot of Iona, founded a monastery at Dull, in what is now Perthshire. The monastic settlement lives on in 'Appin', the name of the surrounding region, which comes from the Gaelic term for abbey lands.

The present church dates to the 17th century, but it stands on the site of an earlier medieval church. This, in turn, almost certainly was built on the same site as St Adomnan's monastery.

The monastery was a centre for scholarship, a form of early university. Perhaps Adomnan selected Dull because it was already a centre of pagan learning, and he simply adapted it to serve a Christian purpose.

It seems that the monastery, apart from its religious and educational role, was also an 'abthanery', or a 'peculiar', which had the right of sanctuary for anyone accused of a crime. To mark the boundaries of the sanctuary a series of stone crosses were erected. These were known as garth crosses. 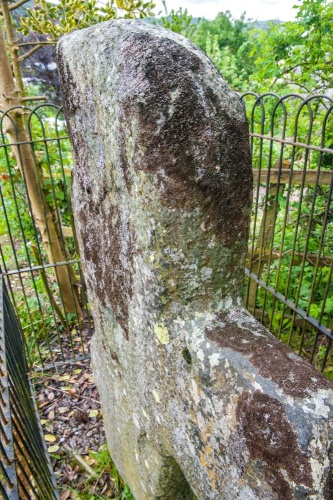 Two of these crosses were later used as gateposts then moved to the Old Kirk at Weem to protect them from the elements. A third cross was lost. The fourth was the Dull Cross, which was used for a time as a market cross before it was moved to its present location and protected by railings.

As a side note, excavations within Dull parish church in 2003 revealed an 8th-century inscribed cross, carved with what appears to be a personal name in Gaelic. The style of the cross is extremely similar to those found at Iona, emphasising the strong links between Iona and Dull.

It is well worth the effort to see the other two Dull crosses in Weem Old Kirk. The kirk is normally locked but you can get keys from the reception desk at Castle Menzies (a refundable cash deposit is required).

The Dull Cross is extremely easy to find. From the east (Aberfeldy direction) simply turn right onto the signposted minor road to Dull. You will see the cross just where the road turns sharply left to head back to the B846.

More self catering near Dull Cross