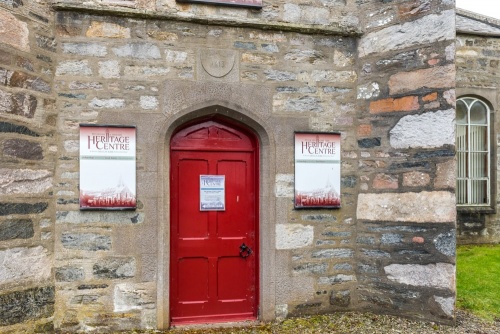 The historic church of Moulin has been converted into a fascinating museum of local heritage. The church interior, including beautifully crafted galleried pews, has been retained and the pulpit area has been restored to its original layout using old photographs as a guide.

The ground floor below the galleries has been divided into an open-plan exhibition area with displays covering aspects of life in Pitlochry and northern Perthshire.

Displays include the Pitlochry Highland Games, the history of Pitlochry, travelling people of Perthshire, the Highland Clearances and emigration, and the Croftinloan School. In addition, there is a look at the Butters family of Faskally and Aldour School.

Learn about spinning and weaving, local crafts, and the archaeology of the region. Items on show include historical costumes such as a locally-made 1908 wedding dress, a pennyfarthing bicycle, musical instruments, Gaelic Bibles, civic regalia, and archaeological finds. Among the latter is an 18th-century sword found in Pitlochry. 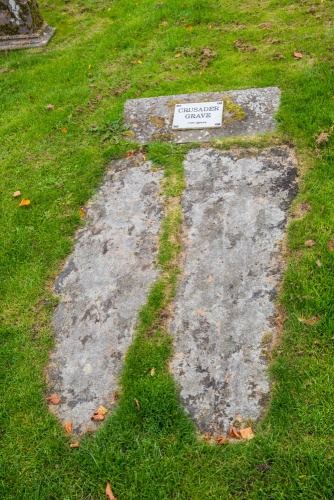 One fascinating item is a 1907 medal given to boys at Pitlochry High School who wore the kilt every day. In the pulpit area is a wonderful exhibit of the Moulin Free Church communion plate including pewter and bronze plates and tankards. There are also items from Sunnybrae Cottage, Pitlochry's oldest house, now preserved by Historic Environment Scotland.

You can also see an enjoyable collection of photographs called Pitlochry Past and Present, with old photos depicting Pitlochry scenes and modern photos of the same location today.

There is a small charge for entry to the Heritage Centre. 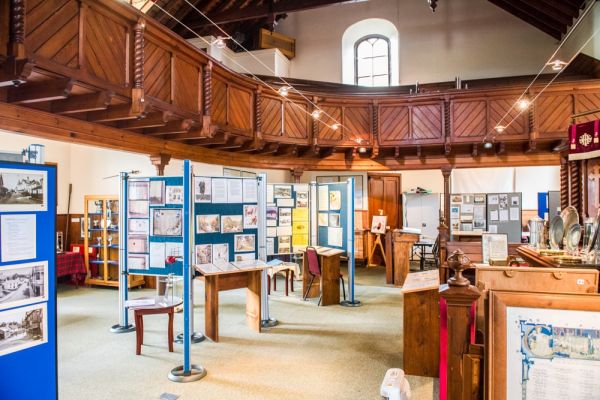 Around AD 670 St Colm founded a church in Moulin. Over the following centuries, the church was rebuilt several times, twice following disastrous fires. The church was enlarged in 1704 and again in 1787.

The present building was erected in 1875 (despite the 1613 date carved over the door, which was rescued from an earlier building). At the same time, the earlier tower was replaced by the present spire. Until 1895 services were in both English and Gaelic.

Moulin Church was declared redundant in 1989 and was eventually purchased by the Moulin Hotel, which stands immediately opposite. It now serves as a home to the North Perthshire Family History Group archives as well as the local heritage centre on a seasonal basis. 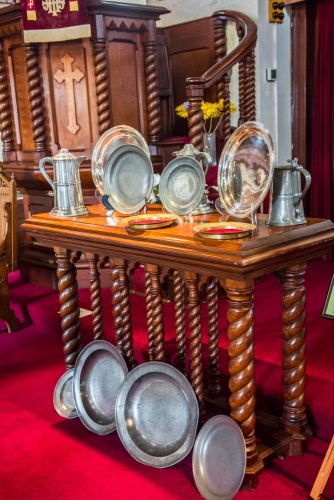 An exhibition of historical church plate

History in the Churchyard

You don't have to go inside the heritage centre to explore the area's history; there's plenty to see in the churchyard. Outside the church is an 18th-century bell cast in Rotterdam in 1749 by Peter Bakker. The bell was damaged during a fire in 1873 and you can see a piece of the lip is missing. Look carefully at the inscription and you'll see that the date is wrong.

In the churchyard is the worn grave slab of a 12th-century crusader knight, carved with a medieval broadsword. The grave slab was re-used in the 19th century and also bears the inscription 'WMD 1808 Aged 73'. It was a common practice to re-use ancient gravestones.

On the west side of the churchyard is an ash tree growing from the stump of a 'Joug Tree'. A 'joug' was an iron collar with a chain attached. If a local person was found guilty of a crime by the Barony Court the joug was attached to their neck and they were shackled to the joug tree for a specified number of hours. 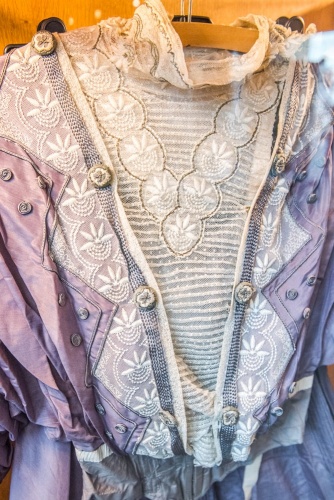 The Heritage Centre is extremely easy to find. From the eastern edge of Pitlochry take East Moulin Road and follow it past the school to the historic Moulin Hotel. Immediately opposite the hotel is the church, with a small parking area directly in front of it.

If you have time to spare after visiting the Heritage Centre you can take a signposted footpath directly behind the churchyard that leads across a field to the ruins of Black Castle, a 14th-century castle erected by the Earl of Atholl. The castle takes its name from the Black Death (Bubonic plague) that killed all the inhabitants in 1500.

It is wonderful to see a historic building like Moulin Church being used regularly. Though the heritage centre is not large, it does give a good overview of local heritage. And if you have an interest in family history the Perthshire Family History Group archives are available for research. 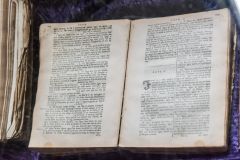