HERITAGE HIGHLIGHTS:   Soldier's Leap, site of a narrow escape during the Battle of Killiecrankie 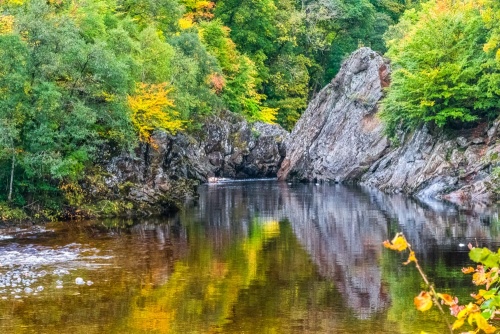 The River Garry at Killiecrankie

The spectacular wooded gorge of Killiecrankie is the site of a famous battle during the Jacobite rebellion of 1689. The National Trust for Scotland Visitor Centre has an exhibition on the battle and the natural history of the area, and there are walking trails through lovely woodland and beside the River Garry.

On 27 July 1689, a government army under General Hugh Mackay met a force of Jacobite sympathisers led by John Graham of Claverhouse, Viscount Dundee (Bonnie Dundee). The battle that ensued was the first of the Jacobite attempts to restore the Stuart monarchy to the throne, a cause that would result in sporadic rebellions until 1746 when the Battle of Culloden finally spelled the end for the Stuarts.

But in 1689 there was no way of foretelling the ultimate failure of their cause, and the Jacobites managed to raise a sizeable force aiming to put James VII (James II of England) back on the throne.

Viscount Dundee led a force of some 2400 men aiming to block Mackay's 3500 government soldiers from reaching Blair Castle, considered a key gateway to the Highlands. Dundee's men arrived at Killiecrankie Pass before the government soldiers and set up in a commanding position on the ridge above the gorge. 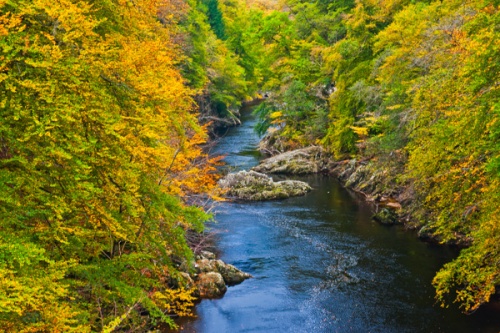 The Jacobites charged down the slope at Mackay's men, with Clan Cameron taking the lead. The charge was so swift that Mackay's men had no time to stop firing and fix bayonets, and the Camerons swept away the centre of the government lines.

The Jacobites routed the government troops, but at a terrible cost; some 800 Highlanders were killed, and Viscount Dundee mortally wounded. The success of the Jacobite cause was short-lived, however, for the government won a comprehensive victory at the Battle of Dunkeld a month later, and the Jacobite supporters were scattered.

One government soldier named Donald McBane fled the battle, pursued by his enemies. He found his escape blocked by the swiftly flowing River Garry, so he flung his rifle aside, and leapt the gorge, from one bank to the other, at a point where rocks jutted from either side to narrow the channel.

Once on the far bank, he managed to escape in the forest and left Killiecrankie with his life and a dramatic tale to tell. The spot where the soldier jumped across the river has been known ever since as Soldier's Leap.

McBane later wrote an account of his adventure in which he describes the gap as about eighteen feet. 'I resolved to jump it, so laid down my gun and hat and jumped, and lost one of my shoes in the jump.'

Some historians doubt the story, and it is easy to see why when you see the gap. There's no way the soldier could have taken a run-up; he would have had to simply leap from a standing start, which makes it a very remarkable feat, if true. On the other hand, he was in fear for his life, and that would have given him a pretty strong incentive to make the jump.

As an aside, there's another very famous and very similar story about Randolph's Leap near Forres, Grampian. 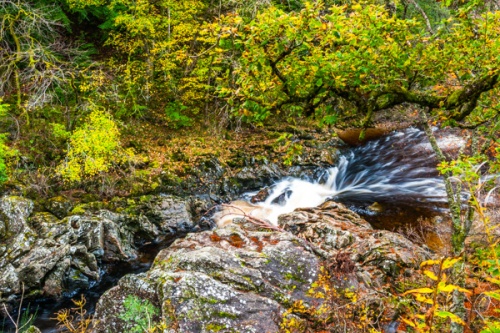 If you take the lefthand path from the visitor centre rather than the righthand trail leading to Soldiers Leap, you will come to a striking Victorian railway viaduct. The viaduct was erected in 1863 to carry the Inverness and Perth Junction Railway.

It was designed by Joseph Mitchell and spans 510 feet (about 155m). Construction cost 5,730 pounds, a very large sum at the time. The viaduct has ten masonry arches, each spanning 35 feet, and rises 54 feet to a parapet.

The riverside trail takes you directly beside the viaduct and you get wonderful views of the masonry construction. 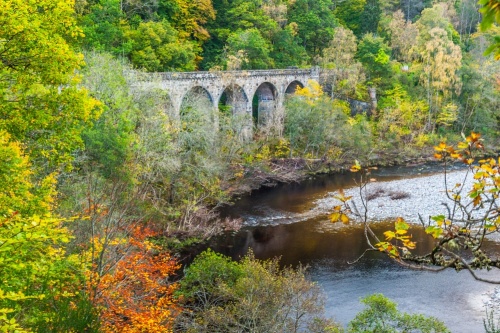 As you walk along the riverside trail past the viaduct you come at length to an elongated oblong stone set into the path. This stone is said to mark the place where Brigadier General Barthold Balfour died during the Battle of Killiecrankie. Balfour commanded two regiments of the Scots Brigades (though the commander and the soldiers were drawn from the Netherlands). According to battle accounts his regiments did not fire a single shot in the conflict before retreating.

Here is where accounts get confusing and quite possibly fact merges into legend. According to one account, Balfour courageously fought off an attack by two or three Highlanders with his sword. The Jacobites must have been struck by his valour - or simply didn't want to risk getting wounded - so they offered him quarter.

Balfour refused, possibly because he thought it an ungallant course of action, or more likely because he did not understand the Highlanders' Gaelic. In any case, he continued to fight and was eventually overwhelmed by his enemies and died. According to one version of events, one of his enemies was Robert Stewart, nephew of Stewart of Ballochin and a Catholic cleric.

The stone itself is rather odd. It is elongated, very smooth, and set into the earth. It bears two long grooves said to have been made by the Highlanders' claymores as they cut Balfour down. The shape of the stone has led to a suggestion that it is a prehistoric standing stone laid flat. Was the stone dragged to this spot as a memorial or did it already stand - or lie - at this spot?

It is said to bring bad luck if you stand on the Balfour Stone. 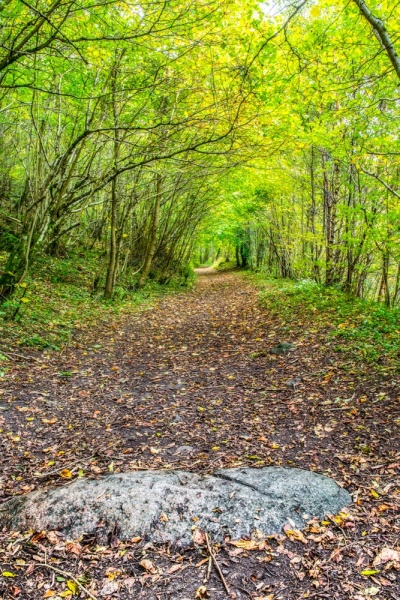 Close to the Balfour Stone, you will see an enclosure to the right of the path, where the National Trust for Scotland has set up a traditional charcoal kiln. The Pass of Killiecrankie is home to a large semi-ancient oak woodland and has been declared a Site of Special Scientific Interest (SSSI) in order to protect the woodland for future generations.

One way to do this is to remove invasive, non-native tree species such as beech, allowing native species like oak, alder, birch, rowan, and ash to regenerate. This also creates a habitat for red squirrels and spotted flycatchers.

The Trust is clearing beech trees to allow these native species to grow. The beech wood is turned into BBQ charcoal using sustainable methods, and the charcoal is then sold to help raise money for the Trust's conservation work. Killiecrankie charcoal is for sale at the visitor centre and at the Trust's Ell Shop in nearby Dunkeld. 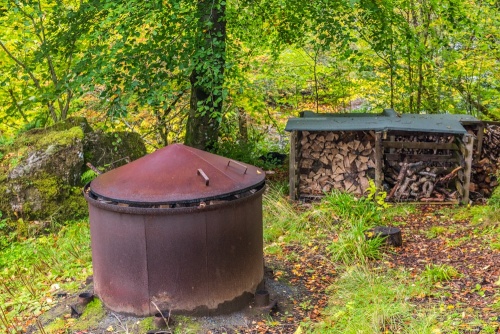 Killiecrankie is one of the most beautiful scenic areas I've visited in Scotland, particularly when the autumn chill turns the leaves of the trees lining the gorge a rainbow of reds, golds, and yellows. Add to that the poignancy of imagining this peaceful place as a bloody battlefield, and the sheer drama of the Soldier's Leap and you have a wonderful visitor experience.

It is very easy to access Soldier's Leap from the visitor centre and will take no more than 10 minutes. If you are feeling more energetic I can highly recommend taking the longer riverside walk to Garry Bridge.

The route takes you over a narrow suspension bridge high above the river, and the views are spectacular. Garry Bridge itself is popular as a venue for bungee jumping, and you can often watch intrepid jumpers, or join in if you're feeling like a bit of extra excitement!

If you are still feeling energetic you can extend the walk another 20 minutes to the Linn of Tummel, another National Trust for Scotland property, where the River Tummel meets the River Garry at a series of waterfalls. Do, please wear good waterproof footwear - or at least mud-proof, for even in dry weather there can be patches of mud along the forest trails.

There are guided walks from the visitor centre from Easter to October, but the woodland trails are open all year round. 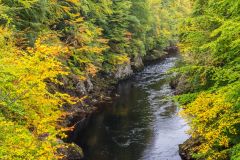 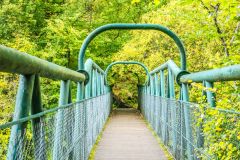 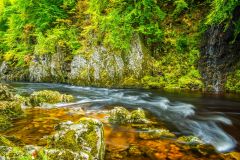 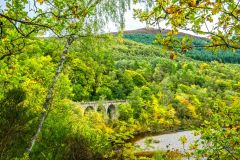 More self catering near Killiecrankie >>

More bed and breakfasts near Killiecrankie >>