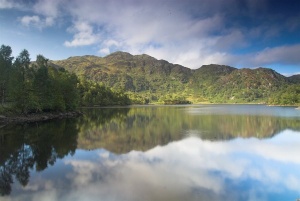 Some consider Loch Katrine (pronounced somewhat like 'Catrin') the most beautiful of all the lochs in the Trossachs region. Though that is open to argument, there's no doubting the beauty of this long, narrow lake, that passes through some of the area's most idyllic and unspoiled landscape.

The loch is eight miles in length, making it one of the largest lochs in the Trossachs, but it is only 500 feet deep. In one of the great engineering feats of the Victorian era, the loch was enlarged, and a pipeline built from it to supply the city of Glasgow with water.

Loch Katrine is famous for its association with two men, Rob Roy, and author Sir Walter Scott. If we were to draw an imaginary boundary down the centre of the loch from north to south, we might call the eastern end of the territory thus created to be 'Scott's End', and the western territory to be 'Rob Roy's End' of Loch Katrine.

Rob Roy MacGregor was the first to walk the hills that fringe Loch Katrine, for this was his territory. He was born at Glen Gyle, near the western tip of Loch Katrine, in 1671. He hid in these hills when an outlaw, and knew the secret paths and byways all along the loch. A small, steep-sided island near Stronachlachar is known as Factor's Island, for it was here that Rob Roy imprisoned the factor of the Duke of Montrose during his long dispute with that nobleman. 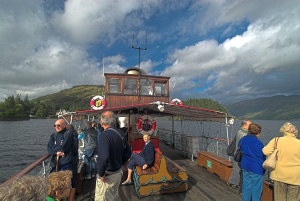 The eastern end of Loch Katrine is forever associated with Sir Walter Scott and his epic poem, The Lady of the Lake. The poem was based on Arthurian legend, and it proved such a popular read amongst Scott's contemporaries that they thronged to the Trossachs to see for themselves the magical places that Scott eulogized in his prose. One of these places was Ellen's Isle, a larger islet than Factor's Island, but still no more than a few dozen paces from end to end.  Above Ellen's Isle rises the bulk of Ben A'an, one of the highest of the Trossachs' peaks. A good walking trail leads to the summit, but if you are less adventurous take a walk around the trail that hugs the shore of the loch.

However, foot propulsion is not the foremost means of transportation on Loch Katrine, for this is the home of the region's biggest tourist attraction, the Steamship Sir Walter Scott. The steamship is moored at Trossach Pier, at the very eastern end of the loch, accessible from the A592 from Callander or via the Duke's Pass from Aberfoyle.  The boat plies the loch from Trossach Pier to Stronachlachar, and along the way, passengers are regaled with tales of the loch and its inhabitants, and boat crew point our places associated with the tales of Sir Walter Scott or the real-life adventures of Rob Roy.

The first steamship on Loch Katrine appeared in 1843, but the Sir Walter Scott is a relative newcomer, making its first sail upon these waters in 1899. The ship had a roundabout route getting here; it was built in Dumbarton and sailed from there to Loch Lomond before it was dismantled and taken piecemeal over the hills before being reassembled on Loch Katrine.

Many passengers choose to rent a bicycle from Trossach Pier, travel one way on the steamship, alight at Stronachlachar and cycle back along the shore. The way is not difficult and it makes a wonderful way to explore this remote and beautiful loch, one of the highlights of any visit to the Trossachs. 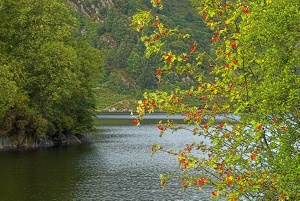 Autumn foliage along the north
shore of Loch Katrine

Our Visit
The Britain Express family visited Loch Katrine and took a ride on the steamship Sir Walter Scott. We found the trip to be very enjoyable, and the slow pace of the steamship made for a relaxed excursion through some fantastic scenery. We do advise booking a place on the ship as early as possible, for space is limited and demand is high during the summer months. Do what we did and arrive early enough to take a stroll along the footpath that runs along the north side of the loch; it truly is a beautiful, peaceful place.