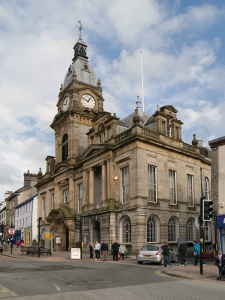 Kendal is a historic market town on the River Kent in the south-eastern corner of Cumbria. Kendal was dubbed 'the auld grey town' because so many of its buildings were constructed of locally-quarried grey stone.

Kendal was settled by the Romans, who built a fort on the bank of the River Kent here in the 1st century. A town grew up around the Roman fort and survived after the Romans left in the early 5th century. There was a thriving community here at the time of the Domesday Book in 1086.

The event that guaranteed Kendal's prosperity arrived in 1189 when King Richard I granted the Baron of Kendal, Gilbert Fitz-Renfried, the right to hold a weekly market. Gilbert paid a sizeable fee for the right, and the money helped Richard fund his crusade to the Holy Land. 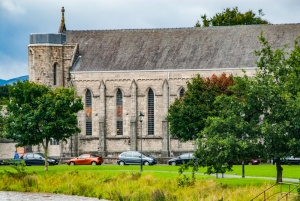 Sometime around 1201, the parish church was built to replace an earlier Saxon building. In 1210 Scottish raiders under the Earl of Fife devastated Kendal. The scots ransacked the town and killed women and children who had sought refuge in the church.

Kendal thrived as a centre of the medieval wool trade. For over 400 years the wool trade was the lifeblood of Kendal and the surrounding area. The trade diminished in the 18th century, but by that time Kendal was an important trading centre. Wool trading was replaced by shoemaking and snuff manufacture.

Kendal also became a centre for the arts. The portrait painter George Romney began his career in Kendal, and many of his works are on display at Abbot Hall. 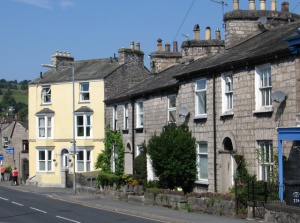 There are two castles in Kendal. The earliest is Castle Howe, an 11th-century motte and bailey fortification on a high hill. The castle was built during the reign of William II, possibly by Ivo de Taillebois, who was given the lordship of Kendal by King William. Sometime around 1210 Castle Howe was abandoned in favour of a new fortification on Castle Hill on the opposite side of the river. Atop the castle mound is an 18th-century obelisk commemorating the Glorious Revolution on 1688.

When the Castle Howe site proved too small, a new fortress was erected on Castle Hill by Gilbert Fitz-Reinfried, the Sheriff of Lancaster. This new Kendal Castle was owned by the Reinfried family until 1383 when Richard III granted it to the Parr family, whose most famous member as Katherine Parr, Henry VIII's sixth wife. Tradition says that Katherine Parr was born at Kendal Castle in 1512, though that seems unlikely, as the castle was ruinous by then. Highlights include the three-storey Main Tower. 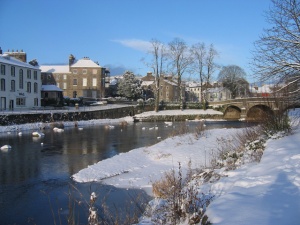 Sanding beside the River Kent is the elegant Georgian mansion of Abbot Hall. The house takes its name from the fact that it stands on the site of a medieval lodging built by the abbot of St Mary's Abbey in York.

The mansion is now owned by the town corporation and serves as the area's art gallery, showcasing works by local artists as well as a permanent collection including paintings by George Romney, JMW Turner, and John Ruskin. The paintings are displayed in beautifully decorated 18th-century rooms.

Kendal is synonymous with mint cake. The delicious local treat was created by accident in 1869 by a confectioner named Joseph Wiper. Mr Wiper was making a batch of mints when his attention wandered and the mixture started to solidify. That simple accident created the first mint cake, a concoction of sugar, water, and peppermint oil (modern recipes add glucose).

Kendal mint cake was perhaps the first 'energy bar' to gain worldwide popularity when Sir Edmund Hilary used it to fuel his climb to the summit of Mount Everest in 1953.

Today mint cake made by hand in Kendal is shipped around the world, but it wasn't easy to spread the word; customs officials in New York refused to let the first shipment enter the country in the 1950s after they ruled that anything with 'cake' in the name had to have flour in it. They dumped the entire shipment into the ocean.

Kendal mint cake is still produced locally. At present, there are three manufacturers; Romney's, Wilson's, and Quiggin's. The oldest of three companies is Quiggin's, which has a distinctive taste difference because it adds salt to the recipe. 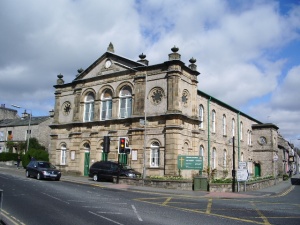 Three miles from Kendal is Sizergh Castle, home to the Strickland family for more than 775 years. Sizergh is an almost completely unaltered example of an Elizabethan manor house -- in part because the Stricklands didn't have the money to remodel it. Like nearby Levens Hall, Sizergh is a 16th-century hall built around a 14th-century fortified tower.

Five miles from Kendal is Levens Hall, a picturesque Tudor manor house incorporating a 14th-century pele tower. It was for centuries the home of the Bellingham family until the last owner gambled the property in a game of cards and lost. The new owner was Col. James Grahme, who laid out the topiary gardens for which Levens is famous.

The gardens were designed by Guillaume Beaumont, who was fresh from laying out the formal gardens at Hampton Court Palace. The gardens at Levens Hall feature the earliest example in England of a 'ha-ha', or hidden ditch.

Kendal is at the junction of several major roads, including the A6, the A5284, and the A684. A word of warning; Kendal can be a bit of a traffic bottleneck (or, maybe we've just had really bad luck every time we visited).

More self catering near Kendal

More bed and breakfasts near Kendal