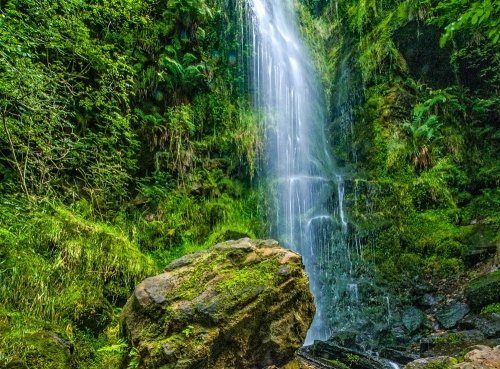 West Beck rises in the moorland above Goathland, fed by several springs. The beck runs into New Wath Scar, a steep-sided ravine carved out of the sandstone by the action of water over thousands of years. 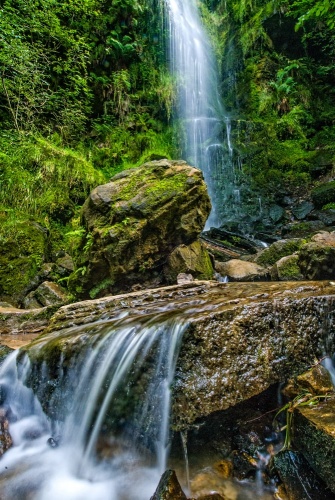 By the time it reaches Mallyan Spout the sides of the ravine are 70 feet high and lined with lush moss. The water has created an almost vertical drop, and the effect after heavy rains can be spectacular. If you come in winter or early spring there is no vegetation to block your view but even at the height of summer the falls can be stunning.

Mallyan Spout is the highest waterfall in the North York Moors National Park. 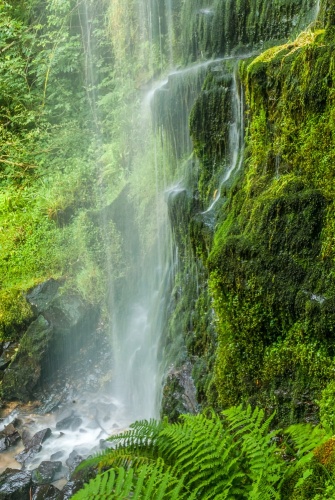 One of the things that makes Mallyan Spout so appealing is that you can get so close to the falls. There are no viewing platforms or railings to keep visitors at a distance from the falls. You can get as close as you wish (or as close as the waterproof nature of your clothing allows).

In wet weather the water spreads along the side of the ravine, producing a soft, gentle spray. 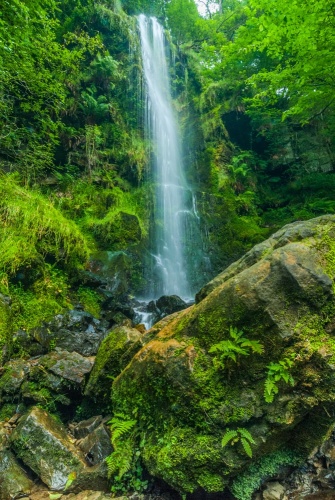 There are footpaths along West Beck, linking the waterfall to Beck Hole, but the easiest way to reach the falls is via a footpath directly beside the Hotel. The path starts at the righthand side of the hotel, which is at the western edge of Goathland village. Please take care; the path can be slippery and muddy in wet weather.

Turn left when you reach West Beck and follow the ledge that hugs the side of the ravine. You will reach the falls after roughly 500 feet (150m). The trail passes directly under the waterfall on its way through Scar Wood, preserved by the Woodland Trust.

If you carry on along West Beck you will come to a bridge and a footpath back up the eastern side of the ravine, making for a lovely circular route through Scar Wood and back to the hotel.

The path is easy to follow, but if you want to make sure you don't get lost you can bring along an OS map. OS Explorer OL27 covers the correct area of the National Park.

Self Catering near Goathland