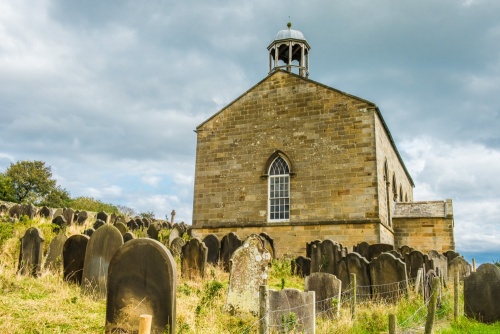 On a hill overlooking the old smuggler's haven of Robin Hoods Bay stands this attractive early 19th-century church. St Stephen's was built very much as a preaching church; the focal point of the interior is a superb triple-decker pulpit, which dominates rows of box pews. There are galleries at both the east and west ends.

The first church on this spot was erected in the 11th century. In the early 18th century a west gallery was installed as well as box pews. By 1816 the church was in poor condition. It was rescued by a local benefactor named Mr Barry, aided by a donation from the Incorporated Church Building Society.

Together, Barry and the ICBS gave 886 pounds to build a new church, which was opened in 1822. What is so remarkable about St Stephens is that it has changed very little from that time.

In 1870 a new, larger church was erected closer to Robin Hoods Bay. The old church served as a mortuary chapel for many years before it was repaired in 1917 and used for services once more. Eventually, damage from a storm led to the church falling out of use a second time and it was declared redundant in 1986 and passed into the care of the Churches Conservation Trust. 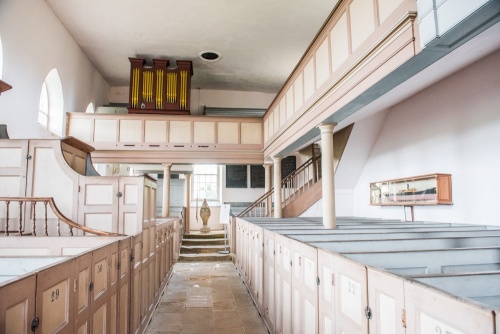 The church building is a very simple affair, looking very like a hall, with only the odd little cupola bell-turret over the west gable to remind you that it is a church.

Reminders of the coastal heritage of the area are everywhere; the interior and the churchyard are full of memorials to shipwrecked sailors, as well as a more uplifting list of successful lifeboat rescue missions.

One interesting feature are several 19th-century 'maiden's garlands', a floral nosegay traditionally carried in a funeral procession for a young unmarried woman. There are four garlands hung in a glass-enclosed area by the church entrance, and a modern example hung at the east end of the aisle to give you a good look at how the garlands were made.

Garlands were made from up to 100 feet of ribbon and strips of colourful cloth by the friends of a young woman who died before she was married - the assumption being that all young women would marry. They would be carried in front of the coffin at the woman's funeral procession. Garlands were made on a frame of two wooden hoops covered in calico. 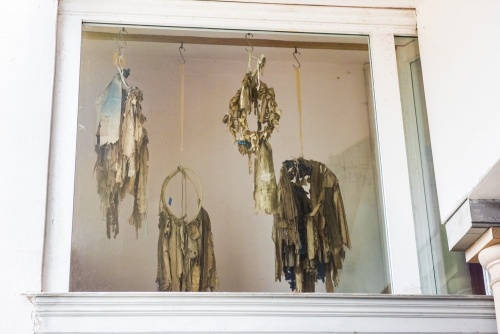 The font dates to the 17th century and comes from the old church on the site. It is carved in an unusual goblet shape. The original Norman font is now in use at the 'new' St Stephens Church on the edge of Robin Hoods Bay village.

On the west wall is a benefaction board painted in 1820, recording donation as far back as 1708. The west gallery is a delight; it is in an L-shape supported on Tuscan columns. At the easternmost end of the north gallery is a private pew for the local squire and his family.

The interior of the pew is furnished with green baize decoration, though now very worn. From the squire's pew, you can get a very good look at the royal coat of arms over the chancel arch. It was painted in 1822 with the arms of George IV.

On the north wall of the chancel is a funeral hatchment to a member of the Farsyde family. Hatchments were usually displayed outside a house when one of the inhabitants died, then later moved into the church. 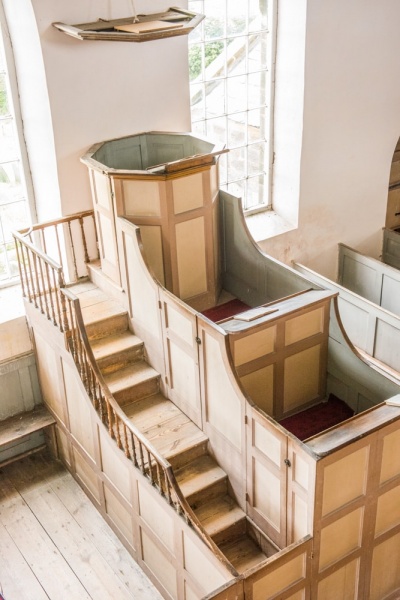 The Georgian pulpit and sounding board

On the south side of the chancel arch is a painted board dedicated to those who served on the Robin Hoods Bay Lifeboat between 1893 and 1922. The Lifeboat men and the congregation of St Stephens were closely linked over the years, and the board lists 25 occasions the Lifeboat was launched.

The box pews that line each side of the nave are each numbered. A pew would be used by a single family who were able to pay the annual rent. If a family could not afford to rent a pew they were seated in the gallery.

Note that the church is sometimes called Old St Stephens to differentiate it from the later Victorian church (New St Stephens) built by GE Street in 1870.

Finding the church is very easy. It stands at the junction of the B1447 and the road to Fylingthorpe, just northeast of Robin Hoods Bay village. It is usually open daily and was open when we visited. 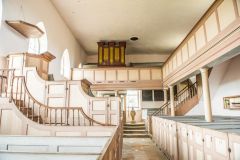 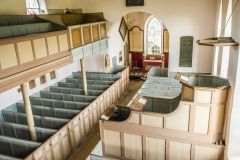