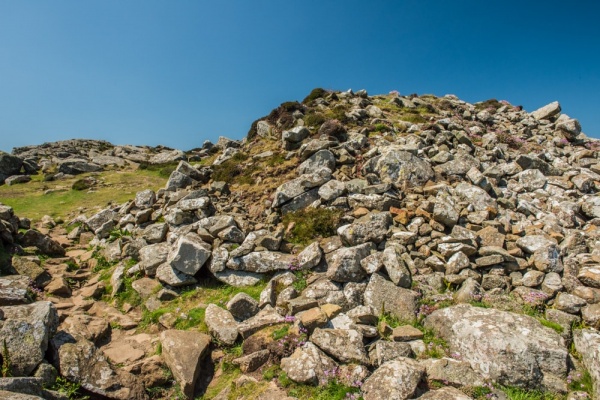 North of Whitesands Bay, Pembrokeshire, the rocky coastline extends to create an exposed headland known as St David's Head, or Penmaen Dewi in Welsh. The headland is a treasure-trove for archaeologists, with ancient field boundaries, at least 3 chambered tombs, circular enclosures, and medieval cultivation ridges.

The two most obvious prehistoric sites on the headland are the promontory fort of Clawdd y Milwyr (the Warrior's Dyke), and within it, a fascinating group of Bronze Age hut circles.

The drystone bank of the Dyke cuts off the headland from the easterly approaches, creating an easily defensible fort protected on three sides by high cliffs. The Dyke runs north to south across the narrowest part of the headland and is entered by a very obvious opening, or gateway. In front of the stone bank is are two outer banks.

The promontory fort is thought to be Iron Age (i.e. roughly 600 BC - 400 AD), though the style of fortification was in use long before that time. 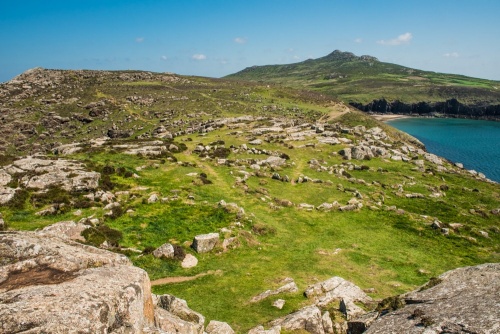 Looking down on the hut circles

Inside the fort walls is a relatively level area at the foot of a rocky outcrop that occupies the tip of the headland. There are very obvious outlines of 6 hut circles on this level area, with partial outlines of several more. Six of the hut circles were excavated by the prolific Victorian archaeologist and vicar Sabine Baring Gould in 1898. Unfortunately, like many Victorian antiquarians, Gould's methods of rough-and-ready excavation made it almost impossible for modern archaeologists to make sense of the site.

Gould found a large number of spindles, used in weaving, and also stones used to grind grain and to scrape hides. Gould's findings suggest that the hut circles were occupied during the Roman period. Could they have been built by native Britons retreating from the Roman incursion into south-west Wales?

Gould also reported that 'As a place of refuge in the face of an enemy, it must have been well-nigh impregnable. It was secure from the sea ... [and] ... A direct assault on the strong rampart would be a forlorn hope if the wall was sufficiently manned'.

You can wander amid the hut circles, but the best way to really get a sense of the settlement is to climb the outcrop at the westernmost point of the headland and look down on the hut circles from above. Here you can see that several of the hut circles are linked together, almost like Iron Age semi-detached houses. Several of the huts share a common wall and four are huddled close together while others are separate. Perhaps this is an indication of family groups?

You can easily make out the entrance to each hut and the outline of the hut walls. In several cases, the hut doorway is flanked by larger stones. 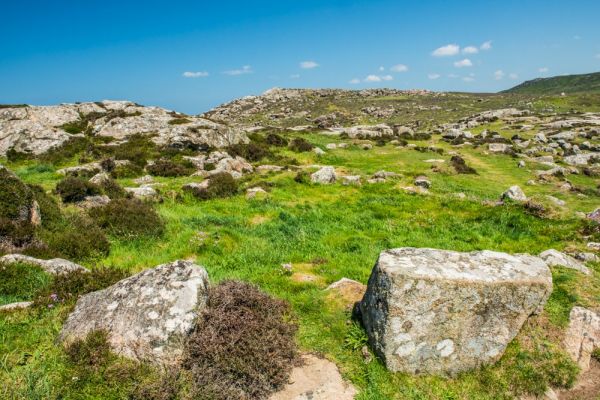 The only way to reach St David's Head is on foot. The headland lies directly on the South West Coast Path, but unless you're following the long-distance trail the best way to reach the hut circles is to park at the Whitesands Bay pay and display parking area and follow the signs for the SWCP heading towards St David's Head. The going is relatively easy, though quite rocky in places, so good walking boots are in order. It is just over a mile to the headland, and then another mile back to the parking area.

There are no information panels to explain the site; indeed, there are no signs at all other than finger-posts showing the course of the Pembrokeshire Coast Path around the headland. That's a real shame, as the site itself is very picturesque and the hut circles and fort banks are quite impressive.

While you're at the headland I highly recommend taking the short walk north-east along the trail to the striking Neolithic chambered tomb of Coetan Arthur (Arthur's Quoit). It is sobering to think that the people who lived in the hut circles would have considered the Quoit an ancient monument. 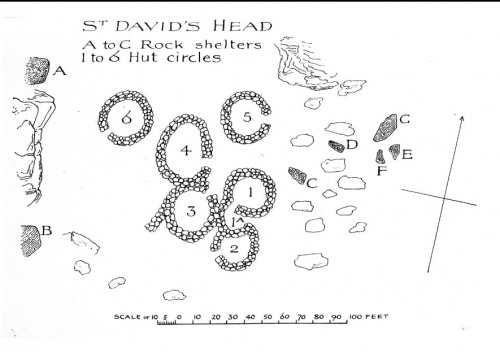 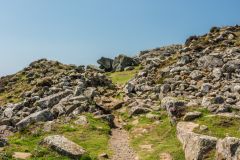 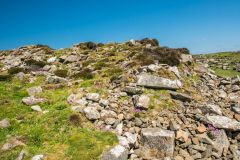 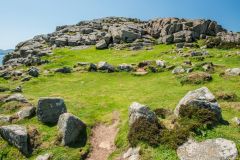 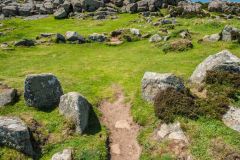 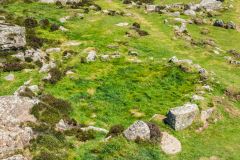 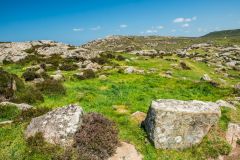 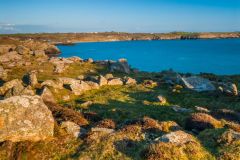