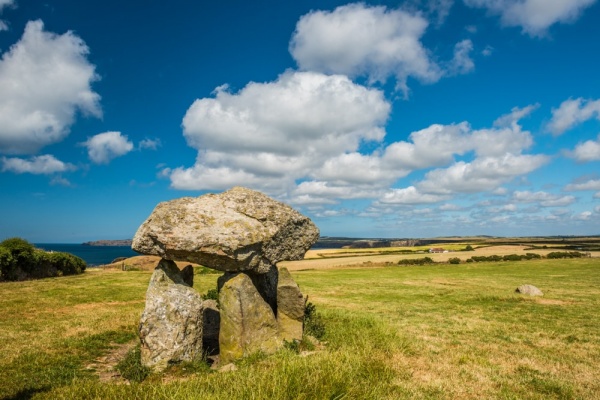 In a dramatic clifftop location just outside the pretty port of Abercastle stands a Neolithic burial chamber known as Carreg Samson. The name translates as 'Samson's Stone' and refers to the legend that St Samson placed the huge capstone in place using just his little finger.

The setting is perhaps more beautiful than any other chambered tomb in Britain.

The dolmen is composed of seven upright stones topped by a huge capstone. The capstone is over 4.5m long (about 15 feet) and 2.7m wide (9 feet). The capstone is actually balanced perfectly on just three of the seven support stones.

Excavations uncovered a pottery vessel holding the cremated ashes of several people. The bowl had been buried under a floor of yellow clay. The excavations also found evidence of post-holes for another four upright stones.

Some archaeologists have suggested that the dolmen is, in fact, all that remains of a passage tomb, though if so, nothing remains of the stones that would have formed a passage to the inner chamber. 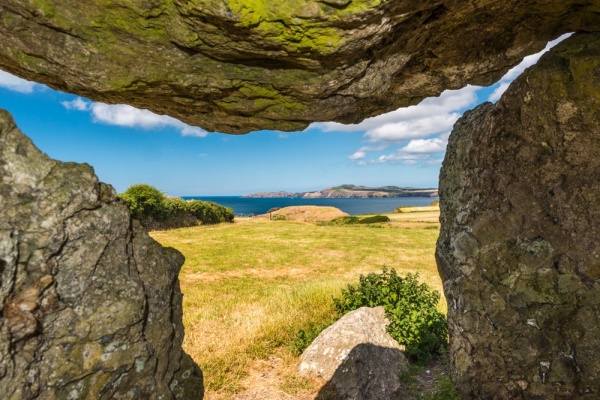 You will see Carreg Samson listed elsewhere as both a cromlech and a dolmen. Technically, a cromlech is an outmoded term for any megalithic chambered tomb, while a dolmen is a Neolithic tomb composed of two or more upright stones topped by a capstone. Dolmens were believed to have been covered with earth, leaving just a central opening to access a burial chamber under the capstone.

Who was St Samson?

The most commonly used name is Carreg Samson, but you will sometimes see it listed as Carreg Sampson with a 'p', like the Biblical Sampson. Ordnance Survey uses this spelling, but most people use 'Samson', probably a reference to the 5th-century saint, Samson of Dol, a native of Wales.

Samson was the son of Amon of Demetia and Anna of Gwent, the daughter of Meurig ap Tewdrig, King of Glamorgan and Gwent. So he had royal connections. He was educated by St Illtud, the Abbot of Llantwit Fawr in Glamorgan. He lived for a time at the monastery on Caldey Island, and became Abbot of Caldey Priory after St Pyr died from falling into a well while drunk.

He later travelled to Cornwall and the Scilly Islands. The island of Samson is named for him. He went on to Guernsey and Brittany, where he established the monastery of Dol, where he was buried. The 10th-century Saxon king Athelstan brought Samson's relics to the monastery of Milton Abbas in Dorset. Carreg Samson from the east

There are two ways to reach Carreg Samson. The first is by car to Longhouse farm, up a lane between Abercastle and Trefin. You will have to park along the lane and follow the signposted footpath to the east of the farm that will take you directly to the dolmen.

A much more enjoyable way to reach Carreg Samson is to park at Abercastle. There is free parking at the harbour. Take the Pembrokeshire Coast Path from the western side of the harbour. The path rises up the cliffs and crosses a small footbridge at Cwm Badau. At the top of the cliffs, the path splits. The right-hand fork continues along the coast, while a footpath leads inland towards Longhouse.

Just follow the Longhouse path, signposted to Carreg Samson. You go through a pair of gates, and you will see the dolmen ahead of you in the farm field. From Abercastle to Carreg Samson is less than a mile and will take no more than 15 minutes. The location is simply stunning and the walk is exhilarating in good weather.

Carreg Samson is one of the most beautifully situated ancient sites in Britain. Though easy to reach on foot, it is far enough from vehicular access to exude a sense of antiquity and solitude. 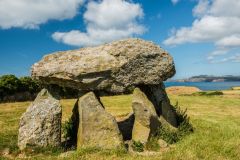 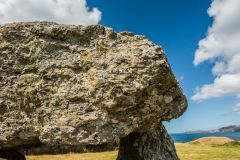 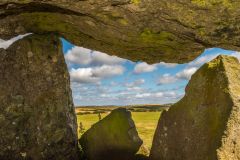 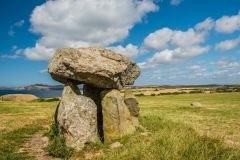 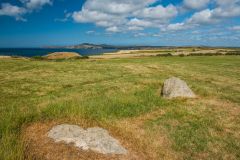 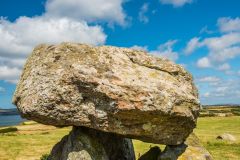