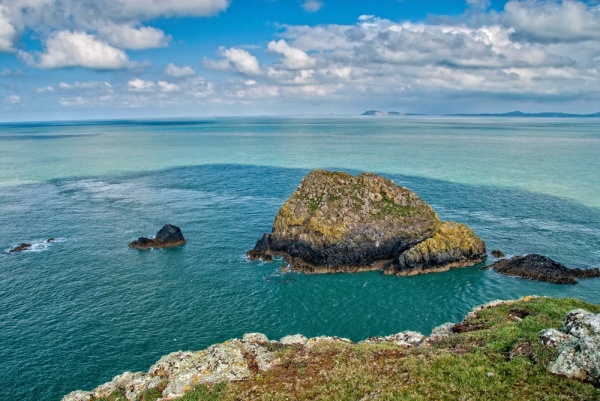 Less than a mile off the Pembrokeshire coast lies Skomer Island, a magical place known for its huge bird population, including a large puffin colony, and its resident seal colony. Skomer can be visited on day trips or overnight stays booked through the Wildlife Trust of South and West Wales who administer the island as the only marine nature reserve in Wales.

Skomer is heaven for birdwatchers and for anyone who enjoys nature. Aside from the popular puffins, Skomer is home to Manx Shearwaters, razorbills, gannets, short-eared owls, and fulmars. The waters around Skomer are home to Atlantic grey seals, harbour porpoises, and dolphins. The best place to see seals is the rocky beach at North Haven, and the best time of year is in spring or autumn.

The waters also support abundant sea-life like vividly coloured sea slugs. On land, you might catch a glimpse of the rare Skomer vole, a unique species that lives only here. The Skomer vole is a subspecies of the Bank Vole. In the 13th century, the Norman invaders of southern Wales introduced rabbits to the island. They used rabbits for food and fur and exported them to markets on the mainland. There are several thousand resident rabbits on Skomer today. 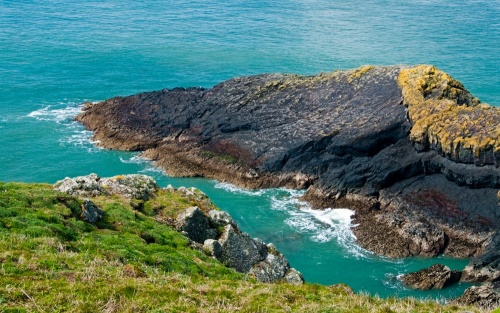 A clifftop view on Skomer

Skomer and neighbouring Skokholm Island together form the largest breeding colony of puffins in southern Britain.

Puffins probably attract most visitors but Skomer is more important ecologically as the home of the Manx Shearwater. Over 165,000 pairs of Manx Shearwater live on Skomer. That's 3/4 of the world's population. Like the elusive puffin, the shearwaters burrow into the soil, turning the entire surface of Skomer into a gigantic network of burrows and tunnels. To protect the burrows visitors must keep to waymarked trails.

Razorbills and guillemots cluster on the clifftops, along with lesser numbers of kittiwakes and other gulls. On rocky outcrops you can spot shags and cormorants drying their wings. Skomer is home to several species of birds of prey such as buzzards and peregrine falcons as well as the short-eared owls mentioned earlier. The predators feed off puffins, rabbits, voles and Manx Shearwater.

These species make up the resident bird population but Skomer also attracts migratory birds including swallows, wheaters, and sedge warblers.

Skomer's exposed location means that trees do not survive on the island. A few willows live in the valley bottom, along with blackthorn and brambles. That sounds barren and bleak but come in spring and you will see the island lush with pink campion and bluebells in vibrant colour. The colours are so stunning that they can be seen from the mainland a mile away.

In the centre of the island is a ruined farmhouse, remodelled to create an interpretation centre and education facility. There is also accommodation for up to 16 people. Most people come to Skomer on a day trip but those who stay overnight get to witness firsthand the extraordinary sight of thousands of Manx Shearwater returning to their burrows as darkness falls. Every August the island holds a special 'Shearwater Week' where volunteers can help the resident researchers take an inventory of the island's population. 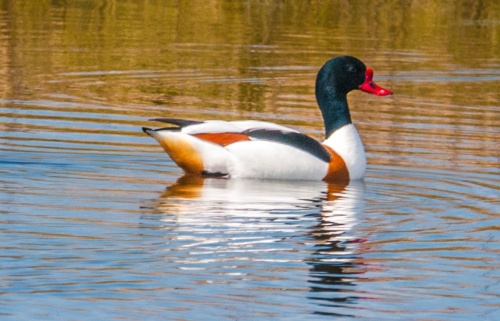 Despite all the focus on birds, Skomer does have historical interest. A short walk from the boat landing is the Harold Stone (also known as the Skomer Stone) a Bronze Age standing stone. The Harold Stone stands 1.7m high and tapers towards the top. It appears to be aligned on a north-south axis.

A researcher from Aberystwyth University observed an apparent midsummer solstice solar alignment between the Harold Stone and a natural notch in the rocky outcrop of North Castle some 117m away. That would suggest that the stone was erected in this exact location for some ceremonial or astronomical purpose.

The Skomer Stone is one of at least four in Pembrokeshire known as the Harold Stone; it is presumably a reference to King Harold, the last Saxon king of England.

Near the Harold Stone are prehistoric field boundaries, though it isn't clear if there is any relationship between the stone and the boundaries. The stone does stand clear of the skyline when approaching by boat, so may have been used as a navigational aid, though other similar stones on the mainland have been shown to mark burial sites.

There are signs of other burial sites on Skomer, some of which may date to the same period.

There is another pair of much smaller Bronze Age standing stones at The Wick on the south side of the island. The pair may have been incorporated into a long field boundary. 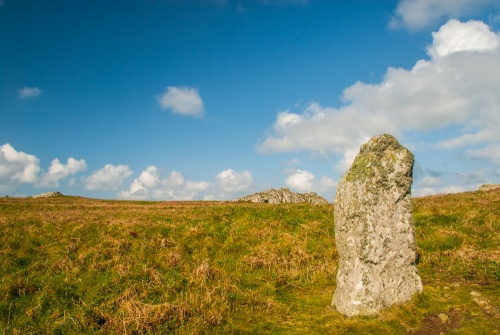 You can visit Skomer on the Dale Princess from Martin's Haven. Trips usually run from Good Friday through the end of September and the boat operates every day but Monday (though it does run on Bank Holiday Mondays). Sailings depend on the weather, so please check ahead to confirm sailings and to book a place. The trips are popular in the summer months and places can fill up so take our advice and book ahead.

Places are limited and if there are too many for a sailing you might have to take a round-the-island cruise rather than landing on the island. Again, it pays to call ahead and book your place to make sure!

Note that there no visitor facilities on the island, though there is a public toilet at the farmhouse. You will have to pay the boat fare on the boat and a visitor landing fee at the visitor centre. Please have cash ready as neither the boat operator nor the visitor centre can accept cards. 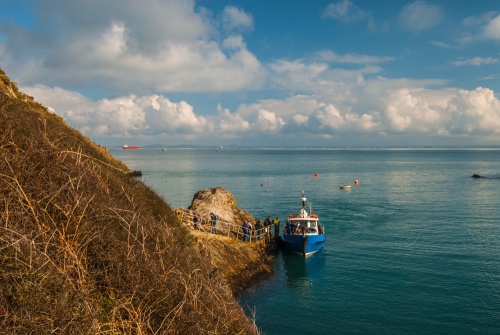 Our family visited Skomer in April, just after boat trips had begun operating for the year and we didn't have any trouble getting a spot. We took the earliest sailing of the day at 10:00 and had approximately four hours on shore to explore the island. We had a wonderful time, and our children had fun spotting seals on the beach and looking for birds through binoculars.

We were quite disappointed not to see any puffins but one of the resident nature wardens told us that a storm the previous day had scattered the puffins and they would return in numbers now that the winds had died down.

Skomer is an absolute delight, especially if you are a keen birdwatcher. 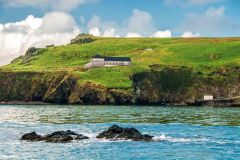 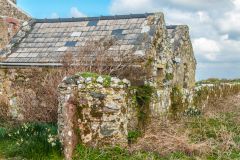 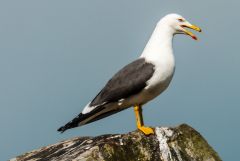 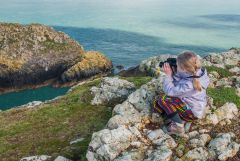 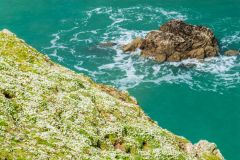 More self catering near Skomer Island