HERITAGE HIGHLIGHTS:   Made with medieval stones from Whitewell Priory 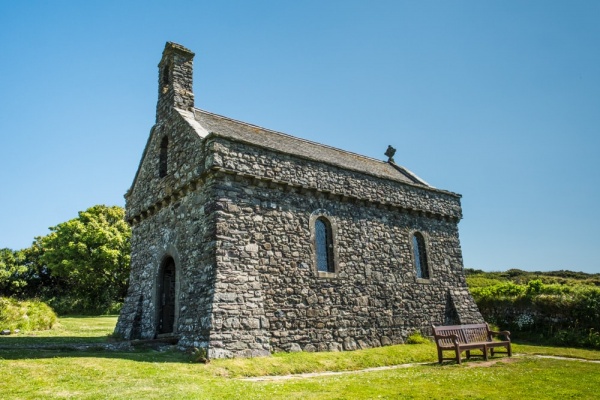 The Chapel of Our Lady & St Non

In a spectacular coastal location south of St Davids stand a complex of historic sites clustered around the traditional birthplace of St David, the patron saint of Wales. The most recent addition to the attractions here is the Chapel of Our Lady and St Non, a small, single-celled Catholic chapel in the grounds of the St Non's Retreat Centre. Though the chapel is relatively modern, it was built with ancient stones gathered from several nearby historic sites.

The chapel was built in 1934 by Cecil Morgan-Griffiths, a solicitor from Carmarthen. Morgan-Griffiths built a residence overlooking the sea. When his wife converted to Catholicism they faced a problem, since the nearest Catholic church was some 16 miles away. He solved the problem by building a chapel between the house and the sea where visiting Catholic priests could say Mass.

He used stones salvaged from ruined buildings in the vicinity and erected a building very much in the traditional style of early Pembrokeshire Christian chapels. It seems he wanted to recreate what the ruined chapel of St Non in the nearby field might have looked like when new. Much of the stone came from nearby cottages built from the ruins of Whitewell Priory, established by Bishop Bek of St David's in 1286 as a hospital for sick priests.

The result is an attractive building that looks like it belongs to the medieval period rather than the interwar period, with a bellcote over the Romanesque west entrance doorway and a cross over the east gable. The chapel is the westernmost in Wales, and also one of the smallest, measuring just 25 feet in length and 12 feet wide.

The interior is lit by stained glass windows with figures of St Bride, St Brynach, St Winefride, St Non, and St David. The east window has glass in the Arts and Crafts style popularised by William Morris. 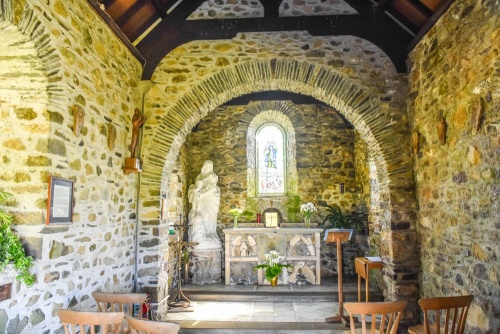 The high altar is made with stone from the Priory of Whitewell that used to stand along the lane leading from St David's to St Non's. In the centre of the altar is a piscina from St David's Cathedral. It was found abandoned in a private garden. There is also a white stone in the shape of a heart, brought from St Patrick's Chapel at Whitesand Bay. The stone was found set into the altar of St Patrick's Chapel during excavations in 1934.

To the left of the altar is a large marble statue of Our Lady of Victories, a copy of the statue in the Church of Notre Dame des Victoires in Paris. The original statue was made to celebrate the victory of Louis XIII over the Calvinists at the Siege of La Rochelle in 1628.

Inside the entrance is a holy water stoup brought here from the Chapel of the Fathoms. In the south wall of the sanctuary is a piscina found built into the wall of a nearby cowshed.

There are no regular services, as the winds can drive rain through the 2.5 feet thick walls in under 30 minutes despite modern waterproofing materials applied to the exterior.

As for Cecil Morgan-Griffiths' residence, it is now a retreat centre owned by the Passionist Fathers and operated by the Sisters of Mercy. Visitors are welcome to visit the chapel during ordinary daylight hours, and the chapel was open when we visited. It is a wonderful place to sit and reflect or just to enjoy the fabulous coastal scenery. The chapel stands almost directly on the South West Coast Path.

Most people come here to see the ruins of St Non's Chapel, one of the oldest Christian sites in Britain. The chapel stands in the nearby field and is easily reached by a footpath from the road leading to the retreat centre. Inside the chapel is a 7th-century carved stone known as St Non's Cross, and beside the path is a holy well dedicated to St Non, whose water is said to help cure eye problems. 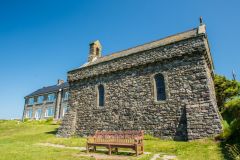 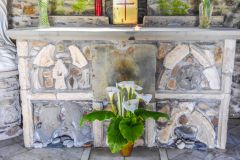 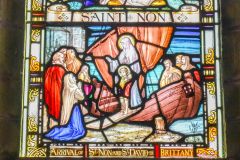 Nearest Accommodation to Chapel of Our Lady & St Non:

More self catering near Chapel of Our Lady & St Non

More Hotels near Chapel of Our Lady & St Non

More bed and breakfasts near Chapel of Our Lady & St Non