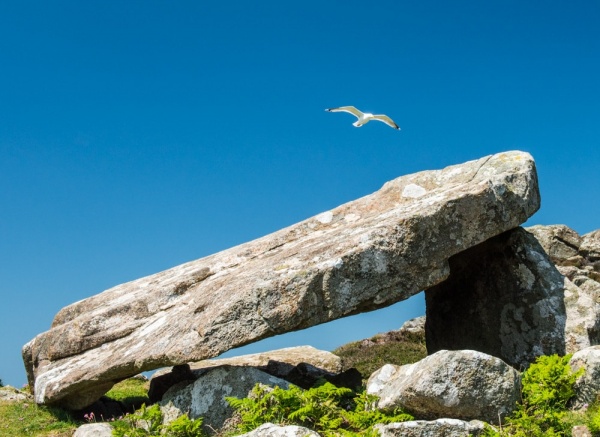 Arthur's Quoit (Coetan Arthur) is a Neolithic burial chamber near St David's Head, Pembrokeshire. The burial chamber was erected around 3000 BC on an exposed ridge inland from a group of hut circles on the headland. The headland is full of ancient remains including signs of ancient field patterns, Neolithic enclosures, and defensive banks and ditches.

The remains consist of a small upright stone supporting a partially collapsed capstone. The huge stones were part of a passage grave linked to a round barrow.

The most impressive part of the burial chamber is the massive capstone, which is roughly 6m long and 2.5m wide. The upright stone supporting it (known as an orthostat) is about 1.5m high.

What is surprising is that there are no other obvious upright supports. There are several broken stones scattered around, indeed the entire headland is full of them, but no obvious orthostats that would have supported the other end of the capstone.

One theory is that there never were any other upright stones, and the simple inclined plane shape of the burial chamber was made to imitate the slope of nearby Carn Llidi. If there were never any other orthostats then Coetan Arthus can be classified as an 'earthfast' megalith. 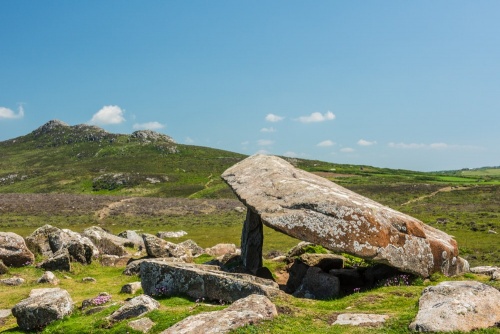 A pair of what might have been sidestones lie prone beside the monument. The inner chamber is polygonal and with some imagination you can make out traces of a round cairn surrounding the chamber.

The Quoit is just one of many prehistoric sites attributed to King Arthur in folklore. according to legend, the chamber was formed when Arthur threw stones from nearby Carn Llidi.

There are no signs to Coetan Arthur, which seems a real shame as it is quite an impressive monument. The entire headland is owned by the National Trust. 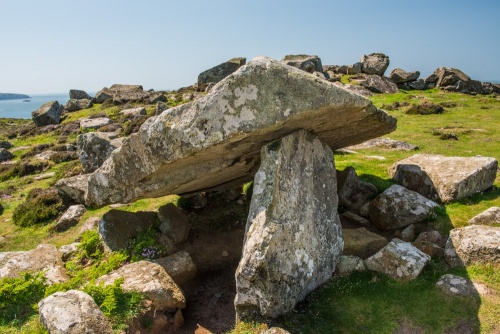 The orthostat (upright stone) and capstone

Half the fun is getting there! The nearest vehicular access is the National Trust parking are at Whitesands Bay. When we visited the cost of parking was extremely high, due to the popularity of Whitesands Bay as a place for families to enjoy a day out on the beach. On the other hand, the parking permit was good for the whole day.

From the parking area, you have to follow the signposted coastal path, which here forms part of the Pembrokeshire Coast Path. The trail leads along the coast past the isolated beach at Porthmelgan before it turns west to St David's Head. Here you might catch a brief glimpse of the burial chamber outlined against the sky on the ridge ahead.

If you're feeling adventurous, you can leave the trail and head straight uphill, but beware that the undulations of the land make the burial chamber seem to disappear from view and you may find yourself lost.

If you stay on the Pembrokeshire Coast Path as it proceeds to St David's Head you will see the remains of prehistoric hut circles on the headland. From the hut circles the trail curves back to follow the northern side of the headland. After several hundred yards you will again see the burial chamber off to your right. There are no signs, so keep your eyes open! You have to leave the path at this point but it is very easy to reach the burial chamber from here.

The National Trust publishes a leaflet entitled 'St David's Head Coastal Walk, Pembrokeshire' which outlines a circular walk from Whitesands Bay, taking in Coetan Arthur. I picked up my copy from the National Trust shop in St Davids. It has a summary of major landmarks on St Davids Head, including the burial chamber, and has a handy - though small - map of the route.

By my estimate, it is just over a mile to the burial chamber from the Whitesands Bay parking area, and then, of course, you have to walk back. The going is fairly easy, but there are plenty of ups and downs as the coast path undulates, and good walking shoes or boots are definitely in order.

While I was investigating the burial chamber a gull soared overhead, perhaps scanning the headland for prey. For a few brief moments, it hovered, motionless on the breeze, immediately above the capstone. I snatched my camera and had time to snap one photo before the gull flew away, but for those few seconds it made an absolutely stunning and timeless image, with its outstretched wings spread wide as it caught the breeze and was fixed absolutely motionless just above the ancient stone monument. It was a moment I will never forget.

Note:
Do not confuse this burial chamber with the similarly named Carreg Coetan Arthur near Newport! 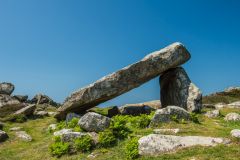 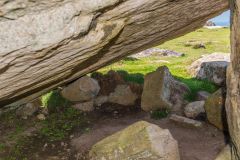 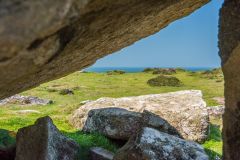 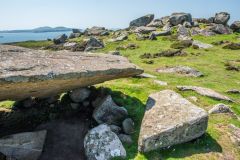 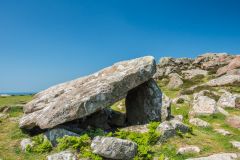