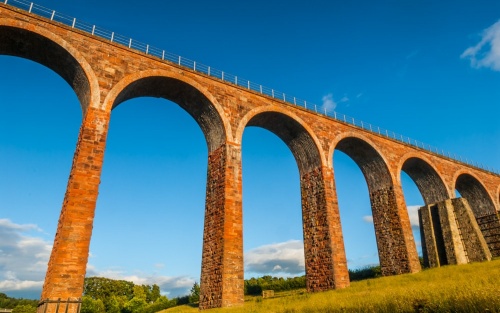 One of the most striking heritage landmarks in the Scottish Borders is the 19th-century Leaderfoot Viaduct, built in 1865 to carry the Berwickshire Railway across the River Tweed just east of Melrose. It was designed by Charles Jopp and Messrs Wylie and Peddie.

The striking Victorian viaduct is a sight to behold, with 19 high, slender arches supporting the railway bed. The semi-circular arches are made of brick for extra stability while the rest of the structure is built of large blocks of dressed pinkish-red sandstone, giving it a beautiful reddish hue.

Each block was dimpled to allow for hydraulic callipers to grip the sides of the stone when lifting them into place.

What makes the Viaduct so striking is the sheer height of the arches, which rest on slender sandstone pillars reinforced with buttresses. 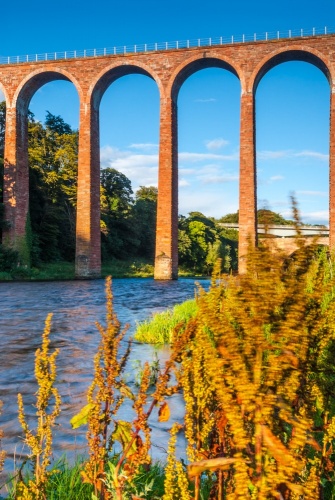 The viaduct rises above the River Tweed

The blocks at the base of the piers measure up to 1.5m long and up to 0.6 m thick, while the blocks at the spandrels and abutments are noticeably smaller at up to 1.1m long and 0.55m thick. Each of the 19 arches spans exactly 13m (43 feet). The tallest span reaches 37m (126 feet) above the river.

This section of the line was damaged by floods in 1948 and subsequently closed to passenger traffic. 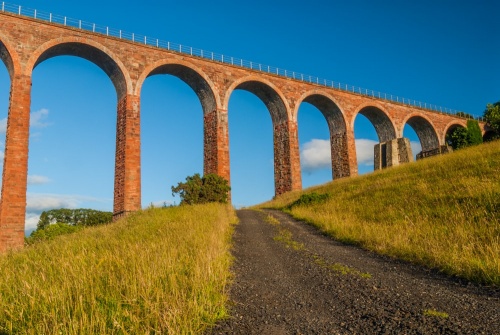 A track runs under the southern arches

It is interesting to realise that the location of the viaduct is practically the same used by the Romans for an important ford across the River Tweed, near its junction with Leader Water. The Roman road here evolved to become the major road known as Dere Street.

The Roman fort of Trimontium grew up around the river crossing and became one of the most important forts in Scotland. The remains of Trimontium lie beneath the field just west of the viaduct.

Three bridges cross the River Tweed here; the Leaderfoot Viaduct, a modern road bridge carrying the busy A68 (built in 1968) and the Drygrange Road Bridge, an elegant stone bridge built in 1780. Together these three bridges of varying age are collectively known as the Tripontium, a play on the name of the Roman fort of Trimontium, incorporating 'pont', meaning bridge.

The Leaderfoot Viaduct was awarded Grade A listed status in 1986. It was restored by Historic Scotland in 1992 and 1995. It remains officially in the care of Historic Scotland (now rebranded as Historic Environment Scotland) but is not 'officially' open to visitors.

That said, it is easy to visit the viaduct if you take reasonable care, and it is extremely easy to see from the other two bridges. The viaduct is a magnet for photographers, and you can see why when you view the beautiful Victorian arches reflected in the waters of the River Tweed. On the hillside above the viaduct is Scott's View, a panoramic viewpoint favoured by Sir Walter Scott, who lived at nearby Abbotsford.

The viaduct is just off the B6360 at its junction with the A68, two miles east of Melrose. 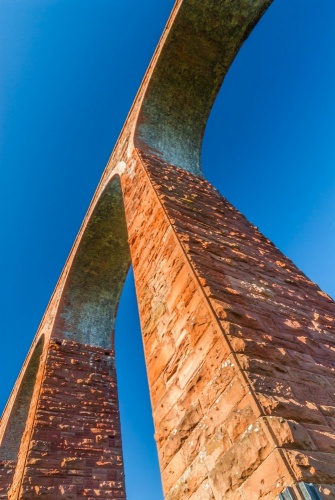 Looking up at the brick-lined arches

More self catering near Leaderfoot Viaduct