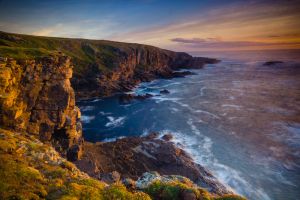 The single track road through Yesnaby ends at the abandoned WWII military establishment on the coast. From here a path leads south along the coast toward Stromness. The cliffs are truly spectacular, encompassing some of the finest coastal scenery you will ever see.

Along the way are blowholes, geos (narrow sea inlets), striking sea stacks, and the remains of prehistoric settlements. The path is easy to follow and the going is not difficult. There are several interpretive signs to explain the geology and plant life along the cliffs. One of the best walks on Orkney, and well worth the outing.

During WWI and WWII  a large number of coastal defence stations were built along the cliffs of Orkney. Most were armed with anti-aircraft guns and with searchlight towers to pick out enemy aircraft. The cliffs at Yesnaby were one such site.

The station was manned by Royal Navy personnel. The brick buildings are starkly functional, nothing more than rectangular structures with stone lintels for doors and windows. One of the surviving buildings housed diesel engines used to provide electricity, and another housed a generator. An observation hut has also survived.

The geology along the coast at Yesnaby is truly fascinating, with evidence of volcanic activity and sand rippling, sand cracking, and pseudomorphs over 300 million years ago. The cliffs are formed from Lower Devonian Sandstone topped by Lower Stromness Flagstones, where you can often find fossilised stromatolites. 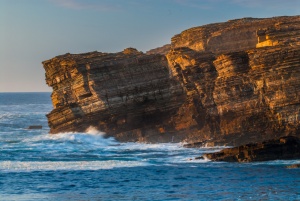 Layers of rock on the cliffs

The clifftop environment is a nationally important area of maritime grass and heath. The RSPB, Scottish Wildlife Trust, and Scottish Natural Heritage have created a series of walks aimed at getting more people to explore and enjoy the area.

One highlight here is the Scottish primrose (primula Scotica), an extremely rare purple flower with a yellow centre. The Scottish primula is found only in very isolated parts of northern Scotland, primarily on Orkney. Another rare find at Yesnaby is the great yellow bumblebee, one of the rarest species in Britain.

At Noust of Bigging, south of the car park, is the scant remains of a chapel dedicated to St Bride. On the Brough of Bigging headland are the outlines of an ancient promontory fort. South of the Brough of Bigging is Yesnaby Castle, a striking sea stack that acts as a magnet for climbers. The 'Castle' was first climbed in 1967 and since then it, and the famous Old Man of Hoy, have attracted climbers eager to test themselves on the almost vertical rock face.

North of the car park is Broch of Borwick, the remains of an Iron Age tower.

A local tradition says that a woman from the area, known as the Yesnaby Healer, could stop bleeding, no matter what the wound, even at a distance. Her talents extended to the animal realm, for she was often called upon by local farmers to stop bleeding in their horses.

Yesnaby is signposted on a minor road off the B9056, a few hundred yards north of its junction with the A967, and about 10 miles north of Stromness. There is ample parking at the end of the road. If you are feeling energetic you can follow the clifftop walk all the way from Skara Brae, through Yesnaby, to Stromness. 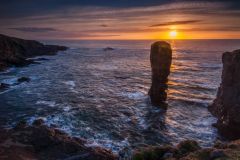 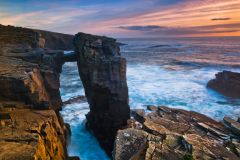 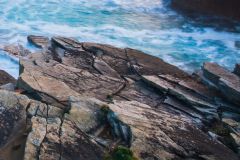 Nearby accommodation is calculated 'as the crow flies' from Yesnaby. 'Nearest' may involve a long drive up and down glens or, if you are near the coast, may include a ferry ride! Please check the property map to make sure the location is right for you.

More self catering near Yesnaby >>

More bed and breakfasts near Yesnaby >>