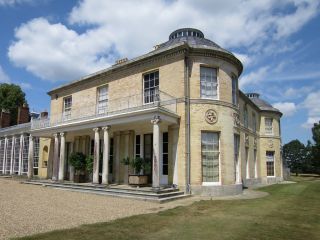 Belmont House
An elegant 18th-century house built by Samuel Wyatt in neoclassical style for Colonel John Montresor. The house later passed to General George Harris (later created Lord Harris). The 5th Lord Harris amassed a huge collection of historical clocks, which can be seen by visitors.
History
In 1769 Edward Wilks, a store-keeper at Faversham Powder Mill, built the first Belmont House on an exposed position commanding wide views across the rolling Kentish North Downs. In 1780 Wilks sold the house to Colonel John Montresor, who extended the parkland surrounding the house. In 1789 he began to extend the house itself, to designs by architect Samuel Wyatt. Wyatt joined the old house to an imposing new central block with a fashionable Orangery.

Tragedy struck Montresor in 1799 when he was accused of embezzling Army funds. He was disgraced, and died shortly after, before evidence emerged that proved he had been innocent. In 1801 the house was put up for public auction and purchased by General George Harris (later Lord Harris). Harris made his name - and a small fortune - by defeating the Sultan of Mysore in 1799 at the Battle of Seringapatam that helped cement British control over large portions of India. Successive generations of Lords Harris served as generals and colonial administrators across the far-flung British Empire.

The house has remained essentially unaltered since the late 18th century and remains one of the best surviving examples of Samuel Wyatt's neo-classical work.

The Belmont Clock Collection
One of the major highlights at Belmont House is the clock collection amassed by the 5th Lord Harris, which is the finest private collection of historic timepieces in Britain. Lord Harris spent a lifetime collecting some 340 clocks and watches. Most of these were kept working by Lord Harris, who also served as Master of the Worshipful Company of Clockmakers and was a founding member of the prestigious Antiquarian Horological Society.

The bulk of the collection focuses on Britain's 'Golden Age' of clock-making, from the mid-17th to mid-18th century. Harris was especially drawn to collect any timepiece with novelty value, such as a 'rolling ball' clock made by Thwaites and Reed in 1972, following an 1808 design by William Congreve. Once a month there is a specialist clock tour led by a nationally recognised expert. Booking for these specialist tours is advisable, as spaces fill up quickly.

The house stands in grounds laid out in the 1790s, with a pinetum, woodland, kitchen garden, walled garden, and formal lawns. There is interest throughout the year in the walled garden, with formal rose beds, long borders, and wisteria climbing the walls. Beside the walled garden is the pinetum, where the Harris family have planted trees to mark family events through the generations. There are regular garden tours available with the head gardener in addition to normal opening times.

More self catering near Belmont House >>