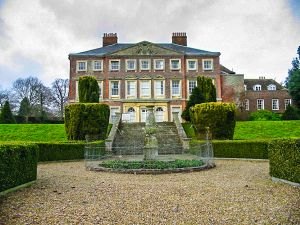 Goodnestone Park Gardens
A well-restored modern garden offering a mix of formal and informal interest. The main features are the three-roomed walled garden, with arched views to the parish church. There is a woodland garden with winding paths beside a tranquil pool, and a formal parterre with views out over open parkland. In addition, there is an arboretum and Gravel Garden.
There are 15 acres of gardens, divided into several main areas. The most popular is the Walled Garden, with lovely views framing the nearby medieval church. Some of the walls that define the garden are older than the house, and contain a rose garden, rill garden, an alpine garden, ornamental greenhouse, and kitchen garden.

Beyond the walled garden is a woodland area, with winding trails through a mix of shrubs and trees, colourful with azaleas, camellias, and hydrangeas in summer. Earlier in the year this area is a sparkling with snowdrops, hellebores, and witch hazel.

Beside the house are formal terraces and parterres defined by box hedges and gravel paths. The parterre looks over the village cricket pitch, while steps lead up to a lime walk and yew hedges. The lime avenue leads to an arboretum, with numerous specimen trees. And speaking of trees, look for an ancient Cedar of Lebanon, which dates to the early 18th century. Other interesting tree varieties include the largest southern beech in the UK and examples of tulip trees and copper beech.

History
The history of Goodnestone House goes back to at least the Tudor period when Sir Thomas Engeham had a manor house here. Later Engehams sold the property to the Bridges family, and in 1704 Sir Brook Bridges, 1st Baronet, built a new house in classical style. Soon after the house was built a large garden was laid out to a design by William Harris. Towards the end of the 18th century, these gardens were swept away by the 3rd Baronet in favour of a landscape park in the style then popular amongst country house owners.

The 3rd Baronet's daughter Elizabeth married Edward Austen, brother of novelist Jane Austen. Jane visited her brother and sister-in-law at Goodnestone House several times, and it was during a visit here in 1796 that she began writing 'Pride and Prejudice'. The 5th Baronet altered the house facade and added a series of formal terraced lawns.

Though these historic beginnings helped lay the overall design of the gardens, it was not until the 1960s that work began in earnest to transform the landscape surrounding the house into what has been called one of Britain's finest gardens.