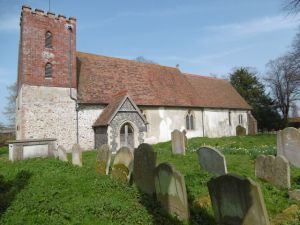 Luddenham, St Mary's Church
St Mary's is a fascinating Norman church set in a farmyard near Luddenham Court. The church stands in an isolated position in marshland near the River Swale.

The church history makes fascinating reading. In the late 12th century it was given by William de Luddenham, lord of the manor, to Faversham Abbey. To solemnise the gift, Luddenham appeared at the abbey with his wife Gaysle and his daughter and heir Matilda, and reverently placed his knife on the convent church altar, in the presence of clergy and lay people.

Sir William de Insula then married Ludenham's daughter Matilda and confirmed the gift of Luddenham church. However, William's son, also named William de Insula, claimed the church as part of his inheritance and launched a legal suit against the abbot and convent.

The younger De Insula succeeded in his suit, and the church was awarded to him. The abbey protested and managed to have the grant confirmed by Pope Gregory X in 1274, but this availed them nothing.

The abbey had to be content with an annual pension of 66s 8d. This pension continued until the Abbey was suppressed by Henry VIII during the Reformation. Henry gave the living of Luddenham to the Dean and Chapter of Canterbury Cathedral.

The church features a finely carved 12th-century west doorway with traditional Norman zigzag patterns, and there are fragments of Roman bricks reused in the walls, particularly in the western quoins.

The nave is likely 12th century, while the very long chancel was added in the early 13th century and contains Early English windows. A later oddity is the unusual west tower, rebuilt in 1807, whose upper section is built of red brick.

One interesting historic feature in the interior is a 13th-century stone coffin lid bearing a carving of a pair of hands which may be enclosing a depiction of a heart. The coffin lid is thought to have come from the ruined church at Stone.

In the churchyard are two mid-18th century headstones (dated 1745 and 1747), and a 19th-century chest tomb, unfortunately so worn that the inscription is illegible.

St Mary's was in the news in 2013 when thieves broke in and stole a prayer table and an altar cross.

St Mary's is no longer used for regular worship and is cared for by the Churches Conservation Trust. As of this writing, it is open daily to visitors.