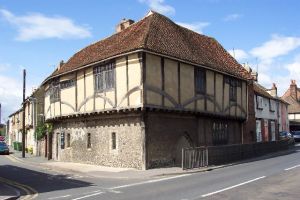 Maison Dieu
Maison Dieu is a fascinating medieval building dating to at least 1234, although it may be much older. It is traditionally held to have been founded by Henry III as a monastic hospital, but it appears that Henry merely gave his name to an already existing establishment.
Maison Dieu (which translates as 'House of God') has been a Royal lodge, hospital, pilgrim's hostel, and an almshouse for royal servants. The building is now a museum, showcasing Roman and medieval artefacts found nearby.

History
Henry gave money to support 3 brethren under a master, all members of the order of the Holy Cross, aided by a pair of secular clerks. Their main task was to say mass for Henry's soul and the souls of his family, their ancestors, and descendants. In addition, they were required to give aid to poor travellers and pilgrims following the old Roman Watling Street (now the A2). Within Maison Dieu was a chamber known as the 'camera regis', reserved for the king as he travelled through Ospringe.

In 1240 Henry granted the master and brethren the right to hold a market and fair. This was a considerable privilege and would have brought a goodly measure of wealth to Maison Dieu. In 1245 the powerful Abbot of St Augustine's Abbey in Canterbury granted brethren of Maison Dieu, and any sick person who died there, the right to be buried in the grounds.

In 1518 the last brother of the Holy Cross order died. He was said to have perished from the plague, so no other brethren could be found brave enough to risk appointment to Maison Dieu. The hospital was dissolved by Henry VIII in 1519 and granted to St John's College in Cambridge, and was eventually transformed into a pub.

Later in the 16th century stone from the medieval building was used to help build the nearby Parsonage.

The building suffered from decay but stayed sufficiently intact for it to become the first village museum in England in 1925. It is now owned by English Heritage but operated by the Faversham Society. Among the highlights of historical finds from the area are objects unearthed from excavations at Faversham Stone Chapel (Our Lady of Elwarton), a mile to the north west. The museum has limited opening hours, so it is a good idea to check the official website before making plans to visit.

More self catering near Maison Dieu >>