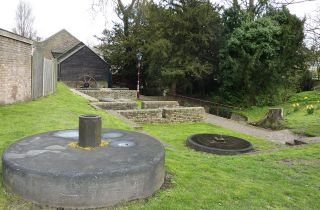 Chart Gunpowder Mills
One of the few remaining gunpowder mills in the UK, Chart Mill was the home of English gunpowder manufacture for centuries, from its initial construction around 1560 until the 1930s. The current mill was built in the 18th century and provides a fascinating look into the painstaking production of explosives and gunpowder over time. Seasonal opening.
The mill was closed in the 1930s and faced demolition until it was rescued by the Faversham Society, who restored the buildings and machinery and opened it to the public in 1969.

Chart Gunpowder Mill was used to 'incorporate', or combine, the mixture of saltpetre, sulphur and charcoal used to create gunpowder. This painstaking process involved 11 distinct stages, and was, as you might assume, quite dangerous if any of the steps were not performed precisely. There were originally 2 wheels driving 4 mills, but now only one iron wheel is active.