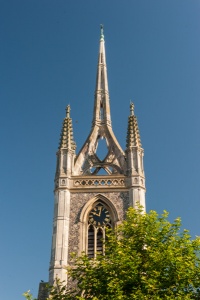 The corona spire of
St Mary of Charity

We do not know when the first church at Faversham was founded, but the parish boundaries were established by 636, which suggests an early Saxon foundation. The first written record comes from 1070 when William the Conqueror granted an existing church here to St Augustine's Abbey in Canterbury.

The most striking exterior feature of the church is the distinctive corona spire, added from 1794-1797 to replace an earlier medieval spire which was found to be unsafe and destroyed in 1753. Much of the nave was also remodelled in Georgian neo-classical style, though many of the Georgian features were later swept away as fashions changed.

The church was historically linked to Faversham Abbey, which was favoured by King Stephen and his family. Stephen, his queen Matilda, and their son Eustace were all buried in the Abbey.

When the Abbey was dissolved at the Reformation the royal tombs were ransacked and the bones tossed in a nearby stream. Persistent legend says that Stephen's bones were rescued from their watery resting place and placed in an empty tomb on the south wall of the Trinity Chapel of St Mary's church. 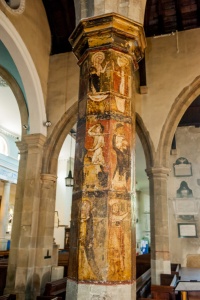 There is a 19th-century plaque marking the ornately carved tomb recess, but there is no way to prove - or disprove - that the bones within belong to King Stephen, though there are small carved heads of a king and queen on the tomb recess. Could this indicate there is truth in the legend?

Faversham's pride is an octagonal column at the north-east corner of the nave. The column is painted around its entire circumference with scenes from the life of Christ, stretching from the column base to the carved capital. The vivid paintings date from 1306 and are, if not completely unique, at least one of the very few such columns remaining in Britain.

There are three tiers of paintings, not necessarily arranged in narrative order!. The lowest tier depicts the Annunciation, the Visitation, and Adoration. The angel Gabriel is shown saluting Mary, who is embraced by Elizabeth. Then the Thre Magi offer gifts to the infant Christ.

The central tier of images shows the Nativity, with a kneeling shepherd, watching animals, and a partial figure of Joseph. This is followed by a depiction of The Presentation, with Christ's family attended by Simeon in the Temple. 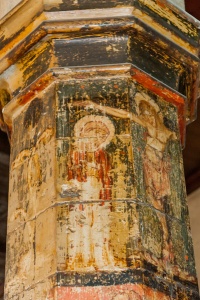 Crucifixion scene on the
painted column

The top tier of the column shows the Passion of Christ, from the Crucifixion to a scene of an angel and three women at the tomb of Christ, with empty grave clothes draped over the tomb.

Though I've tried to describe the scenes, the words cannot describe the visual impact of the paintings. The colours are vivid and rich, and the overall effect is stunning. It is amazing to contemplate that many medieval churches had similarly decorated columns, indeed, they must have been covered in vividly painted scenes like this, yet so little survives today.

If you enjoy medieval architecture, it is well worth a trip to Faversham church simply to view the column. The information panel beside the Painted Column calls it 'one of the most significant medieval artefacts in Britain', and I heartily agree.

The chancel is lined with medieval choir stalls, a dozen of them decorated with a fantastic series of 15th-century misericords (four more are Victorian copies). The misericords are believed to have been brought here from Faversham Abbey at the Dissolution.

Each misericord, designed to offer support to monks during long services, are made from a single piece of oak. Among the figures depicted are a woodwose, or wild man of the woods, a jester playing the bagpipe, a bearded man with three faces, a grinning ape, a fox, a camel, a winged demon, a donkey, and a fox with a bunch of grapes.

One fascinating carving shows a naked man battling a gryphon, while another depicts a wolf half-hidden under a sheepskin. 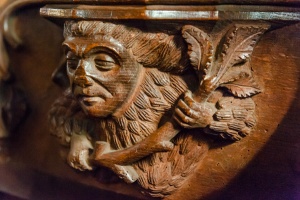 In addition to the misericords, the bench ends feature beautifully carved figures. One extraordinary series of carvings tell a story, with three animals resembling monkeys gathering around a branch bearing fruit.

One creature offers a piece of fruit to another, while a third holds out a paw to receive it. Other figures resemble a winged lion, a mermaid, a dog's head on the body of a bird, a horned sheep, an otter, and an antelope, among other strange and wonderful mythical creatures.

Perhaps the most striking memorial in the church is the brightly painted tomb chest of Edward Fagg, an Elizabethan gentleman of Faversham. Fagg is shown reclining, his head supported by his elbow, his long grey beard flowing. The inscription says that from 1594 'he passed his time ... in laudable study and weighty business'. perhaps that explains his rather severe expression! 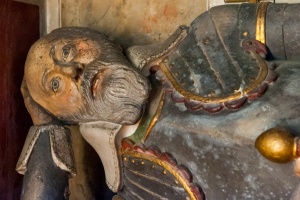 Another very fine tomb is that of Joane Norton (d. 1535), consisting of a richly carved tomb chest under a canopied opening. There is a bit of family politics associated with the Norton tomb; Joane (Joan) had already paid to have the tomb built, anticipating she would lie beside her second husband, Sir John Norton.

Her husband, however, decided to be buried with his first wife at Milton, Kent, whereupon Joan changed her mind and asked to be buried with her first husband at Ingrave, Essex. The Norton tomb was finished, but Joane stipulated in her will that it be used as an Easter Sepulchre.

St Mary's has a rich supply of monumental brasses. Indeed, a national survey published in 1926 claimed that, with 26 brasses, Faversham had more than any parish church in England, not including 20 now lost. It is not always easy to see the brasses; some are protected by carpeting, others have been set against a wall or pillar.

Among the oldest are those of Seman Tong (d. 1414) in the south chancel floor. Tong was three-times Mayor of Faversham, and loaned money to Richard II. Unfortunately the Tong brass was damaged, probably in the Reformation. 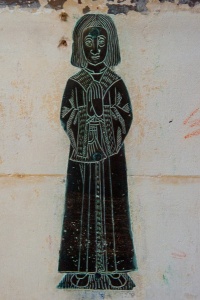 Another early 15th-century brass is that of Henry Paye (d. 1419), commander of the Cinque Ports fleet that fought the French and Spanish in 1405. Only the feet and a pair of heraldic shields remain.

In the chancel floor is a brass of William Thornbury (d. 1480) who served as a vicar of Faversham but spent the last 8 years of his life as an anchorite in a cell in the churchyard. In the south aisle is a brass to Richard Colwell (d. 1533) and his two wives, both named Agnes.

Near the nave altar is an ornate memorial brass to Henry Hatch (d. 1533) and his wife Joan. Hatch was a wealthy fishmonger, and when he died he left most of his sizeable fortune (2400 pounds) to the town, specifying that it be used to repair the church and roads, among other things.

For the next 30 years, Hatch's relations tried to get the will thrown out in the Court of Chancery, but in the end, the town emerged victorious and gained access to the money. It should come as no surprise then that the name of Henry Hatch was highly regarded in Faversham, and a memorial window to the town's benefactor was inserted in the south transept in 1839.

The font is of alabaster and serpentine, designed by Gilbert Scott, one of the leading Victorian church architects, who also designed the beautifully carved pulpit. The previous pulpit, carved by Grinling Gibbons, was sold to Graveney church in 1874.

The old Georgian font is in the south transept. When Scott's new font was installed, it was converted to serve as a sundial and set up in the town recreation ground, before it served as a birdbath. It was for a time in the Fleur de Lis heritage centre, then in 2006 it was restored to the church.

Though the official church website is at http://www.stmaryofcharity.org, there is a sister website at http://www.builttoinspire.org/ which has a wealth of useful information for visitors. In fact, I'm not sure I have ever enjoyed a more detailed church website than Built to Inspire; it is an incredibly rich resource, with excellent pdf downloads of photos and historical background to this delightful town church. 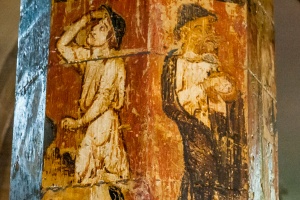 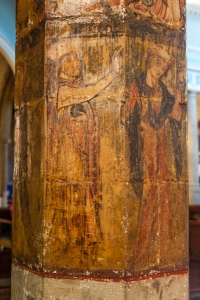 Centre tier of the
painted column 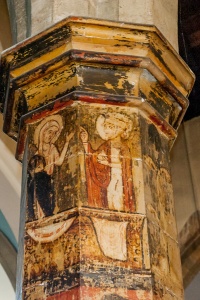 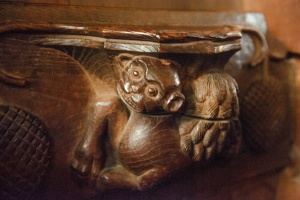 Misericord of a muzzled beast 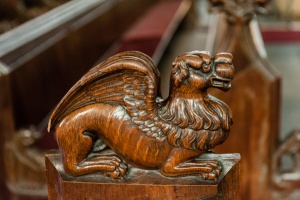 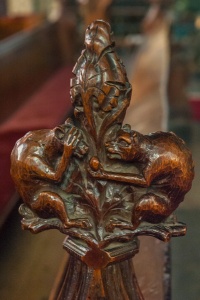 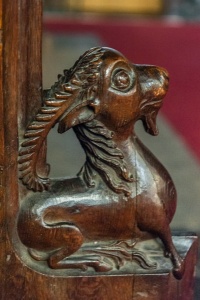 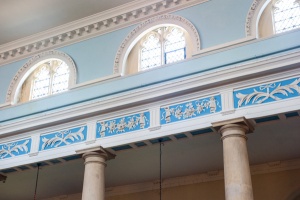 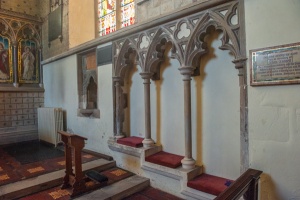 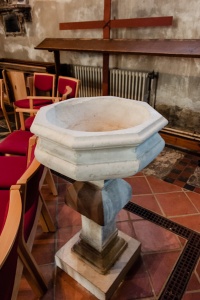 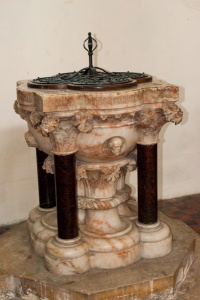 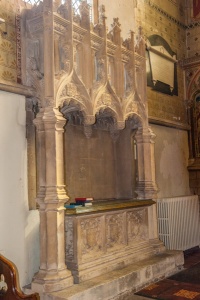 More self catering near Faversham

More bed and breakfasts near Faversham