HERITAGE HIGHLIGHTS:   A Roman pagan mausoleum lies within the ruins 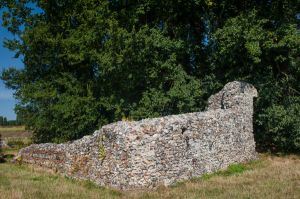 Faversham Stone Chapel
The ruins of a Saxon chapel stand in a farm field outside Faversham. The chapel is unique in that it is the only known Christian site in Britain to contain within it a 4th-century Roman pagan mausoleum.

It is not clear when the chapel was built, but it fell out of use sometime in the 16th century. The remains consist of foundation walls standing to metre high, or slightly higher, outlining a nave, sanctuary, and a section linking them together.

The nave and sanctuary are built of flint and mortar. The centre section, by contrast, uses layers of bricks and tufa atone. Finds of 3rd and 4th-century Roman coins in this section have confirmed that this section is in fact a Roman mausoleum.

The mausoleum was a barrel-vaulted chamber with massive stone door frames. The door stones can be seen where they were reused in the 13th-century buttresses. The Roman door sill is still in place, however. It seems clear that an existing Roman mausoleum was simply adapted for a new Christian church in the Saxon period.

A similar pattern of adaptation occurred in Canterbury, where St Augustine reused existing structures to build Christian churches. It is tempting to think that the Faversham Stone Chapel was adapted by St Augustine, but there is no evidence to support such a romantic notion.

The chapel stands near the presumed location of the lost Roman town of Durlevum and the Roman cemetery at Ospinge.

Faversham Stone Chapel is also known as Our Lady of Elverton. Though owned by English Heritage, the site is maintained by the Faversham Society.

I'll be honest; we struggled to find the site at first. Of course, when we finally figured out where it was we wondered why we'd had such a time finding it! The chapel is in a farm field just off the A2 at its junction with Four Oaks Road, almost directly opposite Faversham Road and 700 metres west of the B2045/A2 junction.

There is a brown English Heritage footpath sign on the A2, but no place to park. The best option is to turn off onto Four Oaks Road, which gets very little traffic, and find a convenient layby to park. From there it is only a two-minute walk to the site, which is clearly in view from the edge of the field.

There is a single interpretive sign outside the chapel wall, and a handy diagram showing the layout of the Roman mausoleum, the Saxon chapel, and the later medieval extensions.

It is the combination of these three time-periods that makes the Stone Chapel so fascinating. None of the walls survives to any great height; the east end is best preserved, but from there, the side walls taper down to become little more than foundations at the west end. But if you step inside the chapel you can clearly see where the Roman stone and tile construction gives way to rougher Saxon work and again to medieval construction.

There is a raised area of stone inside the Roman mausoleum, which might be a form of altar. And there are several very solid buttresses on the north wall, extending into the wooded area behind the chapel. 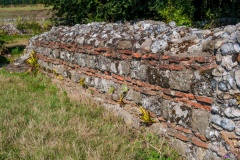 A section of Roman wall 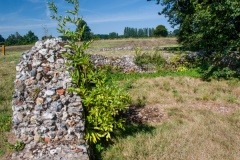 The south wall of the nave 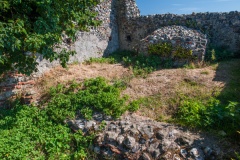 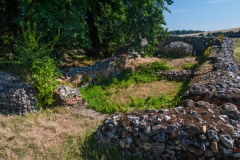 The mausoleum from the nave 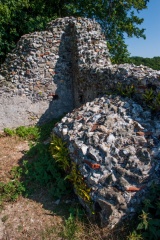 The east end and altar 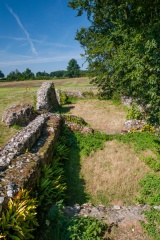 Looking from the sanctuary
into the mausoleum