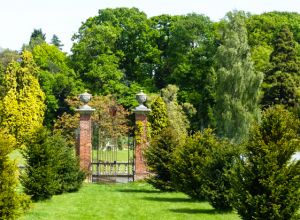 Ten acres of Edwardian gardens at the heart of an 800-acre estate surround a historic 17th-century manor house. The garden features a 'Miz Maze', or medieval labyrinth of hedges and colourful flowering plants.
There is also a Japanese rock garden, rose garden, water garden, topiary, and the Snowdrop Bank, planted by Belgian refugees housed here during WWII.

History
The historic manor house at Mount Ephraim dates to 1695 and has been home to the Dawes family for over 3 centuries. The gardens we see today were laid out in the early 20th century. They were allowed to become overgrown during WWII but were restored by Bill and Mary Dawes from the 1950s.

What makes Mount Ephraim special, if not unique, is that the gardens were not designed or maintained by professional gardeners, but by the family themselves. Perhaps it is for that reason that the gardens have a personality and a charm all their own.

One of the most interesting features at Mount Ephraim is the topiary, clipped to form an eye-catching array of birds, animals, and, most unusually, WWI symbols. One of the latest garden additions is a Millennium Rose Garden, bounded by colourful herbaceous borders and filled with the heavenly scent of roses in summer.

The rose garden features a colourful arbour and wrought-iron arches. Then there is the arboretum, planted to commemorate the Dawes family's 300th anniversary at Mount Ephraim, and the 80th birthday of Mary Dawes. The arboretum occupies a raised mound with views to Hernhill church and across the Miz Maze.

One of the most popular garden areas is the Miz Maze, planted in 2004 on a slope once occupied by a vineyard. The design echoes the ancient style of 'mizmaze'; a series of nine interlinked labyrinths made of turf paths. These labyrinths were used for meditation by monks.

Instead of simple turf paths, the Mount Ephraim Miz Maze is designed with herbaceous perennials and ornamental grasses. The Miz Maze is at its best in late summer and autumn, when the mix of wildflowers and grasses makes a lush habitat for insects and wildlife. 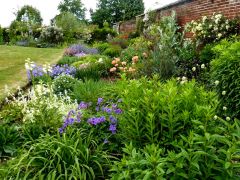 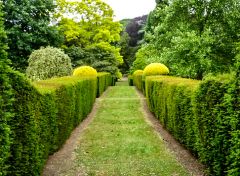 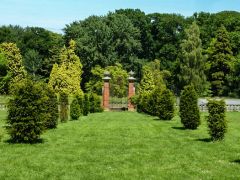