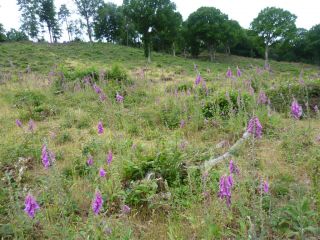 Bigbury Camp
Bigbury Camp is an Iron Age hill fort that was the scene of British resistance against Julius Caesar in 54BC. The Romans subsequently used the hill fort as a military encampment site. Finds unearthed during excavations at Bigbury can be seen at both Canterbury and Maidstone museums.

The fort covers 26 acres (just under 11 hectares). Part of this area is a large enclosure to the north of the main fort that may have been used as a cattle pen. The main fort is enclosed by a 16-foot wide perimeter ditch with an earthwork bank on the inner lip.

Archaeological investigation found a series of post holes in the bottom of the ditch, suggesting that there was a timber palisade there for added security against attack.

There have been quite a few finds at Bigbury, including iron tools and kitchen implements, arrowheads, a knife, and a horse bridle. One of the most intriguing finds was a slave chain, suggesting a trade in slaves between Britain and Gaul before the Roman period.

Bigbury was built around 350BC and was continuously occupied until Julius Caesar's invasion in 54AD. The Roman Lego VII Claudia attacked the hillfort, perhaps under Caesar's personal command, and scattered the native resistance. Caesar's history of the conquest records that the two fort entrances, one at the east and one at the west end, were reinforced by felled trees to block the Roman advance.

After the battle, the inhabitants of Bigbury resettled around Canterbury, and it is quite possible that Canterbury was established as a new settlement specifically for people displaced by the Roman conquest at Bigbury.

The camp is located directly on the North Downs Way long-distance trail, and the Pilgrim's Way, which follow the same route at this point. If you are feeling like exercise it makes sense to reach the hillfort on foot as an afternoon outing from Canterbury.

More self catering near Bigbury Camp >>