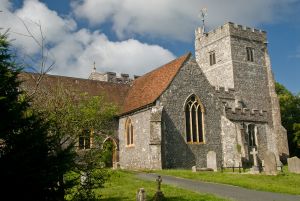 The church of St Mary, Chilham, was mentioned in the Domesday Book of 1086 but has a history going back perhaps as far as the 7th century. In the 12th century, the church was owned by the French abbey of St Bertin, a Benedictine monastery at St Omer. It later passed into the hands of Syon Abbey, based at Isleworth in Middlesex.

The striking tower reaches 68 feet in height, affording far-reaching views. On a clear day, the towers of Canterbury Cathedral can be seen.

The church is famous as the last known resting place of the shrine of St Augustine. When the Abbey of St Augustine in Canterbury was destroyed during the English Reformation, the gilded shrine containing the saint's body was removed from the abbey and brought to Chilham church. Here it stayed until 1541 when it disappeared. Several attempts to determine what happened to the shrine have proved unsuccessful, and its whereabouts remain a great historical mystery.

The interior of St Mary's is notable for some very fine memorials, many to members of the Digges family of Chilham Castle. The finest of these is the very grand monument to Mary Kemp, Lady Digges, who died in 1631. She was the wife of Sir Dudley Digges, who had the current Chilham Castle built beside the old Norman keep above the Stour.

The Lady Digges memorial depicts four seated muses, representing the four cardinal virtues of Patience, Justice, Temperance, and Fortitude. The virtues are seated about a tall classical column that rises to 11 feet in height.

In the north aisle is a poignant memorial depicting two children of the Hardy family, who owned the castle from 1861-1918. The unusual feature of this memorial is that there is a carved battledore and shuttlecock at the children's feet, making this the only known example in England of a church monument depicting children's toys.

There is also an interesting carved and painted memorial to Lady Margaret Palmer, sister of Sir Dudley Digges. Lady Margaret died in 1619 and her flowery epitaph is worth reading; it describes her as

The Digges family memorial, with the family vault beneath, is located in the south-east chancel aisle. At the west end of the church is another family memorial, to the Dick family. On a wall tablet nearby is a memorial to Frederick Dick, with the intriguing inscription that he was 'shot by an unseen hand'.

Within the nave is a very worn table. This comes from the village school, which used to be located in a small chamber above the south porch. The table is much scored with the graffiti of generations of schoolboys; one carving bears the date 1733.

Small fragments of medieval glass remain, Among these are sections bearing the arms of the Esting family (1347-1539) and the Roos, owners of the castle from 1364-1482.

In the north-east corner of the church is a rough sarcophagus of Purbeck Marble. This sarcophagus, of unknown date, was discovered underneath the north transept. It was hoped that it might prove to contain the lost shrine of St Augustine, but when it was opened in 1948 it was found to be empty.

Chilham itself is well worth a visit. The village is beautiful, with a very large number of historic buildings, and of course, Chilham Castle, a beautiful Jacobean house with a landscape garden by Capability Brown.