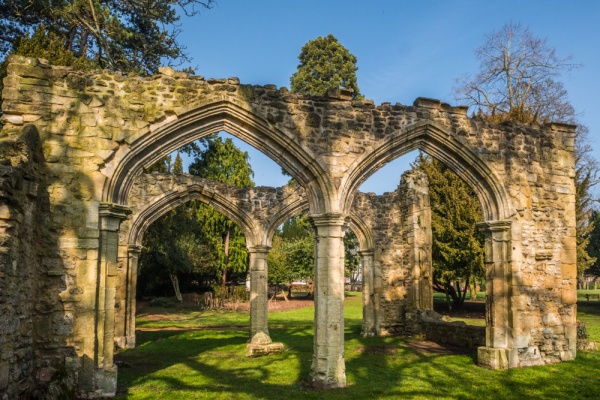 The 'restored' remains of Abingdon Abbey

Abingdon is located on the banks of the River Thames some 7 miles south of Oxford. The town boasts the title of the oldest continuously inhabited town in Britain. There has been a habitation in the area since at least the stone age, but the earliest settlement of any note did not occur until the early post-Roman era. 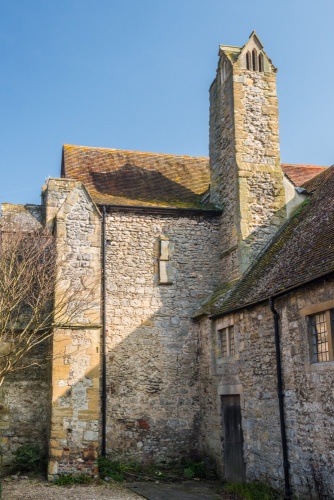 The abbey was founded as an establishment for 12 monks. We know little enough of the early years of the abbey, but we do know that it suffered greatly during the Danish incursions of the 9th century, and when Alfred the Great took control of the manor around 878 AD, following his defeat of the Danes, the abbey was abandoned.

The monastery was re-established and certainly existed in 926, when Athelstan, who had a royal residence at Abingdon, received an emissary of the Franks here. The abbey was refounded in 955 under the Benedictine order and quickly grew to become one of the most powerful monasteries in the country. At the time of the Domesday survey in 1086 Abingdon Abbey was the second-largest landowner in Berkshire after the crown.

Abingdon was favoured by numerous monarchs, and the list of kings and queens who visited the abbey for both short and very long stays reads like a 'who's who' list; William the Conqueror, Henry I, Henry II, queen Matilda, Edward I, Edward II, Edward III, even Henry VIII, who would eventually be responsible for the dissolution of the abbey, stayed here for a lengthy time. 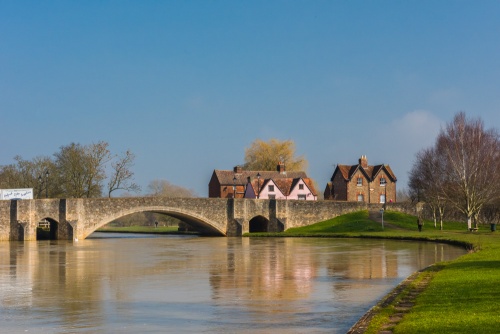 Abingdon Bridge and the River Thames

The power and influence wielded by the monks of Abingdon Abbey came at a cost, however; the townsfolk of Abingdon grew increasingly angry at the privileges exercised by successive abbots of Abingdon. In 1321 this dissatisfaction came to a head, and the townsfolk rioted and sacked and looted the abbey. Again, in 1431, a Lollard uprising struck at the abbey.

It seems that Abingdon Abbey became something of a byword for abuse of monastic privilege; the Vision of Piers Ploughman, the first great work of literature in the English language, equates the abbey with the exercise of monastic tyranny. The abbey church was expanded and extended in the 15th century so that it rivalled the size and scale of a small cathedral.

One remnant of this rebuilding programme is the Abbey Gateway, off the Market Place. Abingdon Abbey was dissolved by Henry VIII in 1536, the first major monastic house in the country to be disbanded.

One interesting historical footnote: the title 'Abbot of Abingdon' is still conferred to this day, but not to a British church official. Rather, it is bestowed upon the vicar of the church of St Paul, in Rome.

The power of Abingdon Abbey during the medieval period may be one of the factors that led to the establishment of the Fraternity of the Holy Cross. This benevolent organization, a sort of medieval equivalent of a modern-day Rotary Club, was responsible for a number of public and charitable works in Abingdon, several of which can still be seen.

The first major project undertaken by the Fraternity was the rebuilding of Abingdon bridge around 1416. The bridge is not one bridge, but three, joined together to provide a safe crossing over the Thames. 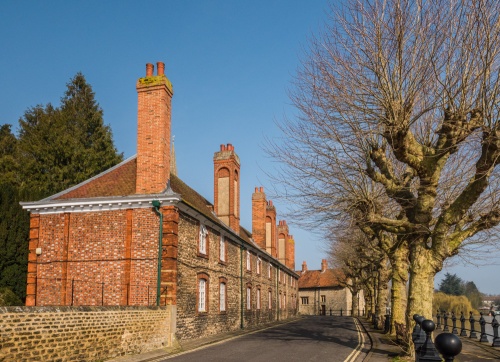 The Fraternity was also responsible for building Long Alley Almshouses, near St Helen church, and an elaborately carved Market Cross. Sadly, the Market Cross no longer stands; it was destroyed by Parliamentary troops during the English Civil War. There has been a market at Abingdon since at least 1328, as well as an annual Michaelmas fair dating to the mid 14th century.

The Market Cross stood on the site of the current County Hall, on the south side of the Market Place. The County Hall is probably Abingdon's most recognisable building. It was built between 1678-1682 by Christopher Kempster, a pupil of Sir Christopher Wren.

The result is an attractive three-storey building, very much in the style of Wren, with the ground floor standing on arched columns to provide space for market stalls. The top floor was designed to be a courtroom, but it now houses a very good museum of Abingdon's local history. Among the exhibits on display are Romano-British finds from the area, and objects excavated from a Saxon cemetery unearthed on Saxton Road. 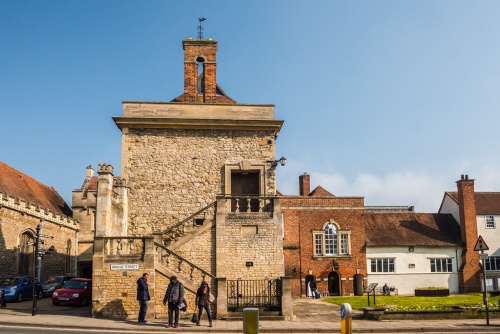 The County Hall is a few steps away from St Nicholas church, a lovely early medieval building with a square, battlemented tower. Much early Norman architecture remains, including the west door. The interior features a 15th century font, and a Jacobean pulpit, as well as a rather grand tomb of John and Jane Blacknall (d. 1625).

Just outside St Nicholas church, the road passes through the old Abbey Gateway, built around 1460. From the Abbey Gateway, the road leads to Roysse Court, named for local benefactor John Roysse, who was responsible for founding a free Grammar School on this site around 1568. Here you will find the Guildhall, not really one building but a series of much rebuilt historic buildings which have been used for a variety of civic purposes over time, including a school, courthouse, and civic offices.

Bridge Street leads from Market Place towards the river. Here are several lovely old buildings, including the Crown and Thistle Inn, built in 1605 on land that once belonged to the abbey. The name of the inn refers to the union of Scotland and England under James I (if you were English) or James VI (if you were Scottish). Remember that in 1605 this was pretty big news, and no doubt a hot topic in the court of public opinion.

Opposite is the County Gaol, built by French prisoners during the Napoleonic Wars. It is no longer a prison, but a local leisure complex. 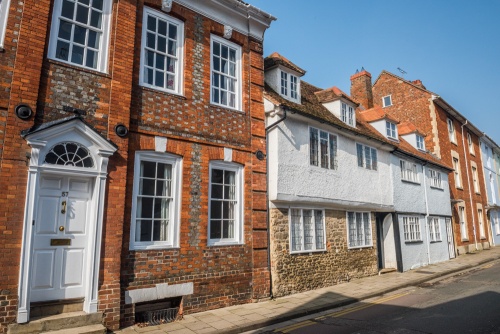 If you follow Thames Street to the riverside you will pass a number of attractive older buildings, some of which were once part of the complex of abbey buildings which stretched along this whole area. Included in a group of four buildings is the old abbey granary.

The finest building is the 13th-century Checker Hall, which boasts a lovely half-timbered roof. There is also a magnificent chimney, probably the best surviving example of a chimney from this period anywhere in England. The name 'Checker Hall' refers to the building's probable function as a counting house, or house of Exchequer, for the abbey.

The final building in the Abbey group on Thames Street is the Long Gallery, which probably provided accommodation for abbey clerks working at Checker Hall. This building dates to the 15th century, and again has a beautifully built half-timbered roof. 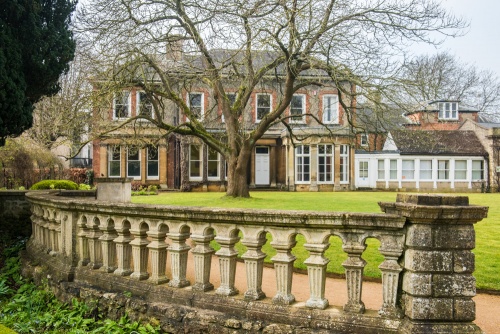 The ruins of Abingdon Abbey stand in a lovely park-like setting beside the river. A fair bit of arches and walls remain, and though the magnificent abbey church is gone, the ruins do give a sense of just how impressive the abbey must have been at its height of power.

Behind the County Hall is East St Helen Street, which leads past some lovely houses dating between the 15th and 20th centuries to St Helen's church. There has been a church on this site since at least the 10th century, but the current building dates to the 13th century, with the addition of a striking 15th-century steeple (remodelled).

Above the 15th century north porch is a chamber known as the Exchequer, where the Fraternity of the Holy Cross used to hold its meetings. Among the treasures of the interior is the 16th-century tomb of John Roysse, a 17th-century candelabra, and the 15th-century memorial brass of Geoffrey Barbour.

Around St Helen churchyard are ranged a series of almshouses dating to several different periods. The oldest of these rows is Long Alley Almshouses, built in 1446 by the Guild of Our Lady and the Fraternity of the Holy Cross. This building, remodelled with much use of brick, and with the addition of a Wren-ish cupola, does not at first glance appear to be as ancient as it is, but a closer look shows its age. On the north of St Helen's churchyard are the Brick Alley almshouses, erected in 1718. 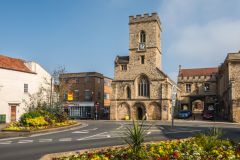 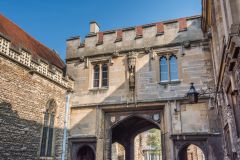 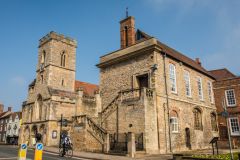 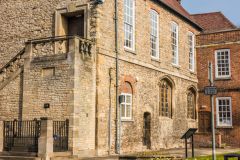 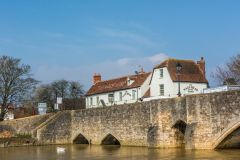 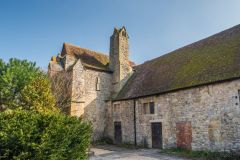 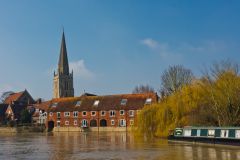 More self catering near Abingdon

More bed and breakfasts near Abingdon