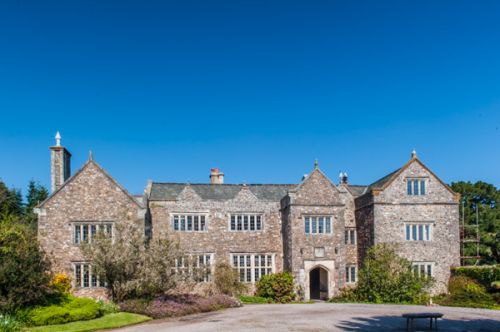 Just outside the Devon village of Sidbury is the beautiful Elizabethan house of Sand. Set in six acres of gardens, the 16th-century home of the Huyshe-Shires family is open to the public on a limited basis, but the peaceful grounds are well worth visiting. Within the grounds are a woodland area, terraced gardens, and a Tudor thatched summer house, in addition to a Christmas tree plantation and a late medieval hall.

Sand was rebuilt in 1590 from an earlier Tudor manor and fully restored in the early 20th century. It has been the home of the Huyshe family since 1560. The majority of the house is Elizabethan, and guided tours will inform visitors young and old, and regale them with tales that include the requisite ghosts! As part of the tour, visitors will see legal documents relating to Sand that go back to the 13th century.

Sand hosts an annual outdoor theatre event, with the stage located to use the house as a backdrop.

Sand takes its name from William de Sande, who bought the property from the Dean and Chapter of Exeter Cathedral in the middle of the 13th century. Records show that there was a small stone house on the site in 1408 when it was sold to Roger Tremayle. Tremayle replaced the original house with a new building, and his grandson Thomas built a second house around 1500 with a kitchen, great hall, and entrance. 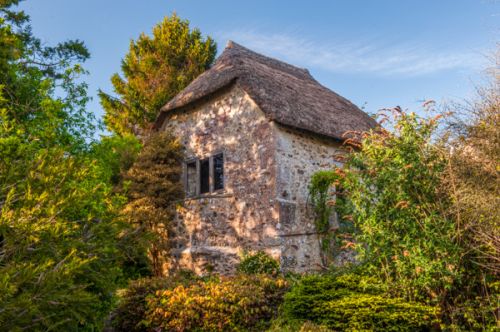 In 1560 both houses were sold to Henry Huyshe. His sons inherited when he died six years later, but in 1584 they sold Sand to a close relative, James Huyshe, who made his fortune as a grocer in London. James Huyshe had a remarkable 29 children with two wives.

His eldest son, Rowland, inherited Sand in 1590. Rowland Huyshe was married to Anne Wentworth, a descendent of Edward I.

It was under the ownership of Rowland and Anne Huyshe that Sand began to take on its present form. They added wings on either side of the original L-shaped house and created the present two-storey stone entrance porch. They must have also restored the neighbouring medieval hall house, for it bears a carved plaque with the initials RAH and the date 1600.

We know that there was a garden as early as the 17th century. The only remaining features of this garden are a decorative stone arch topped by a Capel family coat of arms and a peculiar thatched gazebo, or summerhouse. Inside the gazebo is a stone alcove, made with stone from the medieval house. This may have been used as a place of private worship.

The current garden was laid out in 1911 and altered in 1970. Aside from the summerhouse, it includes mixed borders, woodland walks, and a kitchen garden. 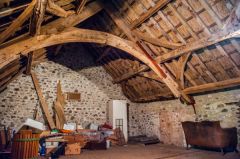 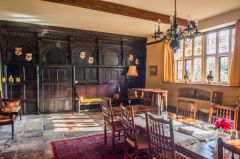 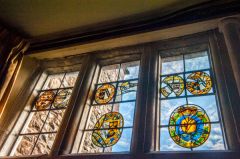 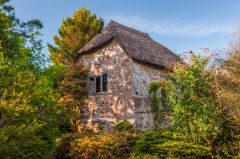 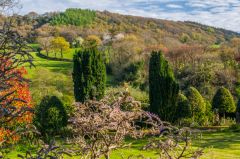 More self catering near Sand >>

More bed and breakfasts near Sand >>