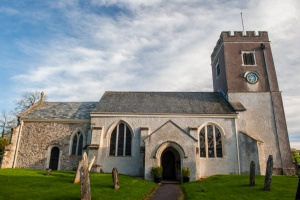 The first written record of a church at Gittisham comes from 1244 when the parish was known as Giddesham. We know very little about that early medieval building, but it was rebuilt in 1321. The roof was thatch, and was only replaced with slate tiles around 1800.

The interior is decidedly Georgian, with lovely box pews installed in 1715 and a large west gallery. This was built in 1701 by Sir Thomas Putt of Combe, the local manor house. There are several interesting carvings; look for the Green Man on a pillar near the visitors book.

The nave and south aisle have wagon roofs, decorated with carved wooden bosses. Among the boss decorations are Tudor roses and odd faces. Over the north door is a royal coat of arms to Charles II, dated 1661. 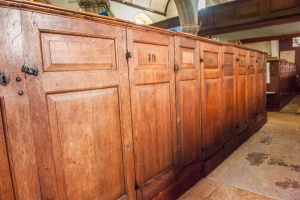 The south aisle is full of historic interest, with several fascinating historic monuments. art the east end of the aisle is an alabaster memorial to Henry Beaumont (d. 1591) and his wife Elizabeth (d. 1627). Both figures are shown kneeling in front of prayer desks, and on Elizabeth's prayer desk is an infant in swaddling clothes, a poignant reminder of a child who died in infancy.

Henry Beaumont was a generous benefactor to the local poor; he left over £800 worth of property to be administered for the poor of the area, and the Beaumont Trust he founded is still operating.

The east window above the Beaumont memorial contains panels of heraldic glass to the families who have held the manor at Gittisham since 1424. The Beaumont arms date to 1500, and the Putt family crest dates to 1650. A modern panel to the Marker and Fairholme family was added later. 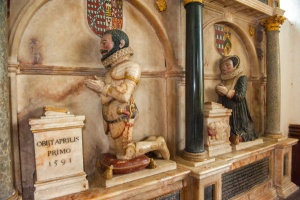 Immediately beside the Beaumont memorial is the tomb chest of Ursula Putt, erected by her husband Thomas in 1674. Lady Ursula was a lady in waiting to Catherine of Braganza, Charles II's queen. Sir Thomas was Sheriff of Devon in 1473, and became the first mayor of Honiton in 1685. When he died in 1686 his name was added to his wife's memorial. Over the tomb are a series of hatchments to the Putt family.

On the south wall is another interesting memorial, to John Fiennes, a lawyer at Grey's Inn, London, who died in 1671.

There are some interesting fragments of medieval and 16th-century glass. The oldest glass in the north-east window and shows, among other things, the tale of the Prodigal Son. Most of the original glass was destroyed in 1644, when Cromwell's soldiers ransacked Combe House and seized Nicholas Putt, the squire.

They intended to take Putt to London for imprisonment, but he died on the journey and was brought back to Gittisham for burial. Some large fragments of stained glass were discovered in the 19th century, languishing in an unmarked box in a timber yard on the Combe estate, and reinserted here.

Outside the west end of the tower is the grave of Henry Ince, a Sergeant-Major with the Royal Engineers, who constructed the first tunnels under the Rock of Gibraltar.

Immediately outside the churchyard is the old village school, founded in 1720 by Sir Thomas Putt. Subjects taught included navigation; a reminder of how important the art of seafaring was in this part of England.

St Michael's is a gem of a church; the combination of Georgian furnishings and historic monuments makes it an extremely rewarding church to visit. The village is typical of this area of East Devon, which is to say, its as pretty as a postcard, with thatched cottages standing along winding lanes, surrounded by steep-sided wooded hills. 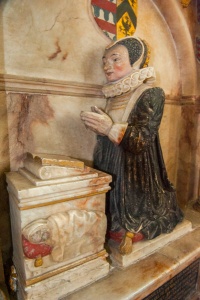 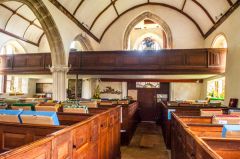 More self catering near Gittisham

More bed and breakfasts near Gittisham