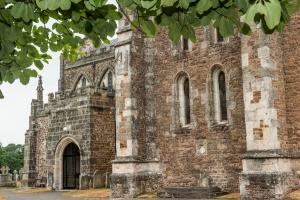 The parish church of Ottery St Mary owes its current form to one man; Bishop John de Grandisson of Exeter, who rebuilt an earlier 13th-century church on this sloping site in 1342. Grandisson's new church was built along collegiate lines, and modelled closely after Exeter Cathedral.

It is this conscious emulation of the cathedral that accounts for the extremely large size of the church, which seems massively too big for the population of the town. The weathercock is over 500 years old and is perhaps the oldest in Europe.

Before Bishop Grandisson took a hand, Ottery's parish church had more of a 'French Connection' than an English one; by a grant of Edward the Confessor the manor and hundred of Ottery was vested in the cathedral church of Rouen in France.

It was not until 1334 that Bishop Grandisson reacquired the church and only three years later set about replacing the earlier structure with the large and ornate building w see today. The Bishop set up a college of 40 secular priests to administer the church, supported by all the tithes of the village.

When Henry VIII suppressed the college of priests at the Reformation he created a body of 4 church Governors, to which his son Edward VI added a further 8 Governors to make an even dozen. These Governors still legally own the church and graveyard. one of the church properties transferred to the Governors was the schoolhouse founded by Grandisson in the 14th century. This became the King's Grammar School and is still in operation. 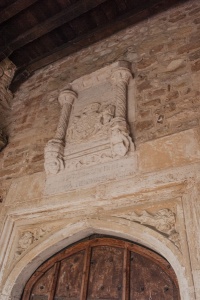 To the 14th century church a south aisle was added around 1520, and since that time the church has remained essentially unaltered, so that in appearance it has been relatively untouched by the hand of time (though the collegiate buildings associated with the original church have long since disappeared).

At the west end of the nave, facing each other across the central nave passage, are a wonderful pair of canopied 14th-century tombs, with effigies lying in state under finely crafted arches. These tombs are to Sir Otho (d. 1359) and Lady Beatrix de Grandisson. Sir Otho was the brother of Bishop de Grandisson.

High above, the nave roof (and the chancel beyond it) is a treasure, with beautifully carved roof bosses. Over the nave altar is a boss commemorating Bishop Grandisson, who donated the wooden eagle lectern. 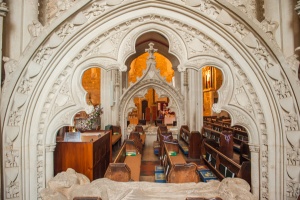 One of the most unusual and fascinating features inside the church is a 14th-century astronomical clock hanging in the south transept (probably built around 1340). The clock still has its original mechanical works, though sadly it is no longer working.

Opposite the clock is an effigy of Jane, Lady Coleridge (d. 1878). The effigy lies in a niched surrounded by excellent Victorian tiles designed by William Butterfield, who helped renovate the church in 1850.

As Betjeman's Best British Churches rather delicately puts it, Butterfield and his associate Edward Blore 'did less harm than might be expected'. Butterfield was also responsible for the very attractive marble font.

The altar screen is worth investigating; it is not original, but a 'best guess' at replicating what the original 14th-century screen installed by Bishop Grandisson might have looked like. Just below the high altar are the original 14th-century canon's stalls. There are more canon's stalls n the Lady Chapel, with their original misericords. Also in the chapel is a medieval eagle lectern and a gallery made of Beer stone.

In the North Dorset Aisle is a life-sized effigy of John Coke of Thorne, a governor of the church (d. 1632). There are also nicely carved Tudor bench ends. In the chancel is the tomb of John Haydon of Cadhay (d. 1588).

At the west end of the church is an information display about Samuel Coleridge, a native of Ottery St Mary, Whose father was vicar of St Mary's church. He was born in the old Schoolhouse, baptised in the forerunner of the current font, attended the old King's School nearby, and would have worshipped in this church regularly. 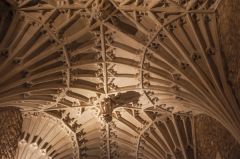 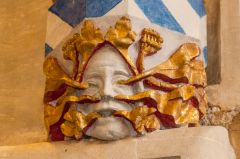 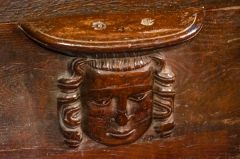 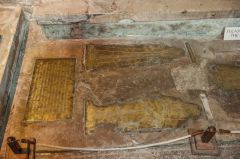 Self Catering near Ottery St Mary