Skara Brae is the best-preserved group of Stone Age houses in western Europe. Long buried by sand, they were uncovered by a storm. The houses, linked by covered passageways, contain stone furniture, including beds and shelving. There is an interpretive exhibition and a museum at the site to explain the discovery of Skara Brae and how the inhabitants lived. 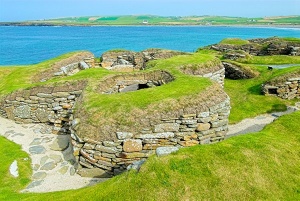 THE DISCOVERY OF SKARA BRAE

During the winter of 1850, the west coast of Orkney was hit by a fierce storm, which tore sod from the overgrown mound known locally as Skerrabra. When the local laird, William Watt, noticed walls exposed by the storm, he decided to excavate.

Over the next 18 years, four houses had been excavated, but then the work was abandoned until 1925. Again the weather took a hand; another storm damaged the buildings and a seawall was erected to protect the site from further damage.

During work on the seawall still more ancient stone walls were discovered, and as a result, the entire site was excavated between 1928 and 1930. Erosion is a constant problem at Skara Brae, and though the site is now at the shore, it is highly likely that when it was inhabited it would have stood well inland.

Radio-carbon dating allowed archaeologists to determine that the site was occupied for approximately 600 years between 3200 BCE and 2200 BCE.

Skara Brae is composed of eight houses connected by passageways roofed with sod. Each house is built to the same design; a central hearth with a stone dresser opposite the entrance, and beds to either side.

The village was laid out with individual family living quarters branching from a single, main passage. Anyone moving through the village had to follow this passage. The village also had a well-planned drainage system and perhaps even toilets. 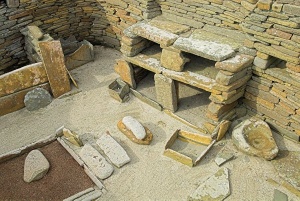 The living areas were essentially identical; each opened onto a central hearth with a stone dresser on the far side opposite the entrance. Some living areas had a large seat immediately before the dresser.

Some houses had a large stone block to the left of the entry, forcing people to move to the right when entering. Archaeologists have speculated that the right was symbolically associated with the male, or most powerful element of this society. This may be supported by the fact that beds to the right are larger than those to the left.

It is misleading to think of Skara Brae as an underground village. In fact, the houses were built into a large midden (a rubbish-heap) which provided stability and much-needed insulation against the harsh climate.

The Neolithic inhabitants of Skara Brae were likely farmers, who lived in reasonable comfort and self-sufficiency through growing their own crops and raising livestock. If we can judge by the garbage found at Skara Brae, cattle, sheep, barley, and wheat seemed to make up the major part of their diets.

They were also keen fishermen, and the remains large quantities of shellfish and fish were also found here. It seems likely that the number of inhabitants varied between 50-100 people throughout the time Skara Brae was inhabited.

WHY WAS SKARA BRAE DESERTED?

It has been suggested that Skara Brae was deserted after some cataclysmic event, similar to the eruption of Mount Vesuvius that buried Pompeii. It now seems more likely that over the course of occupation the detritus of living (read garbage) built up, and this, combined with the erosive effects of wind, sand, and sea, eventually made the site uninhabitable. It is also possible that changes in Neolithic social structure made the tightly knit village model such as Skara Brae no longer an essential of life on Orkney.

ACCESSIBILITY
The site is wheelchair accessible as are the toilets. 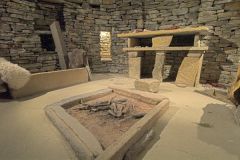 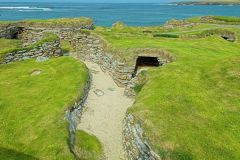 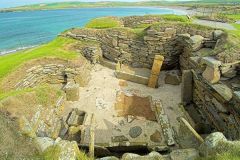 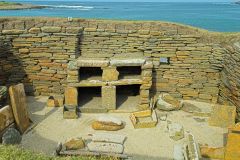 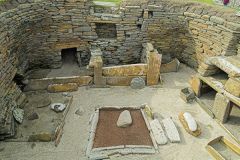 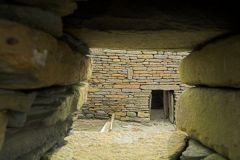 Nearby accommodation is calculated 'as the crow flies' from Skara Brae Prehistoric Village. 'Nearest' may involve a long drive up and down glens or, if you are near the coast, may include a ferry ride! Please check the property map to make sure the location is right for you.

More self catering near Skara Brae