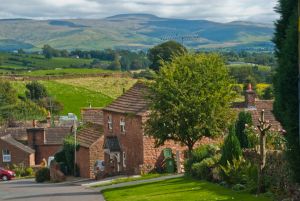 Great Salkeld is a small village north of Penrith, famous for its unusual church tower. The tower houses two vaulted chambers and, unusually, a dungeon. A Roman altar discovered here in the late 19th century is displayed in the church porch.

The village's location is on several ancient drove roads used to bring cattle to market. The village pub is named The Highland Drove and was once used by drovers who watered their cattle at The Dub, just outside the village. During the Middle Ages, the village was held by the crown and was sometimes known as Salkeld Regis.

Sometime around AD 880 the monks carrying St Cuthbert's body from its resting place on Holy Island, Lindisfarne, rested here for a time before continuing their long, wandering journey which would in time lead them to Durham. A church almost certainly grew up on the site where the saint had rested, but that Saxon building was rebuilt around 1080, with the addition of a pele tower in the 14th century.

The tower was much more than simply a place to hang the church bells, it served as a refuge in times of trouble, and given Salkeld's location close to the Scottish border, trouble was never far away!

That same sense of trouble in the air is echoed in the Rectory, a fortified building erected in the 15th century. The Rectory boasts a date stone over the door inscribed 1674 but this was the date of a rebuilding, and even the lintel appears to be reused.

I visited Great Salkeld on a sunny day in early September, and the first thing I noticed was the sense of peace and quiet. Though the village is only a few miles north of Penrith, it seems centuries away from the hustle and bustle of the Lake District and the tourist traps further west.

The valley has an incredible sense of calm, and timelessness, only enhanced by the lovely architecture of the houses here, most of which are made from the local red sandstone. Like most of the Eden Valley, Great Salkeld has all the scenic beauty of the Lakes with none of the crowds. 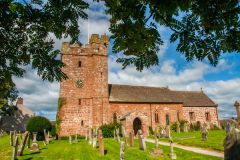 More self catering near Great Salkeld >>