One of the most scenic - and least visited - places in the Lake District, Wrynose Pass lies between Little Langdale and the Duddon valleys. A narrow, winding road twists and winds as it climbs to the summit, reaching 1281 feet in the process. The view from the top of the pass is superb, one of the best in the Lake District.

The single-track road reaches a gradient of 1 in 4, and the constant switchbacks make it a challenge to drive. However, the reward for meeting that challenge is an amazing view over some of the most beautiful and remote hills of the Lake District National Park.

At the bottom of the Little Langdale end of the pass is Fell Foot Farm, a 17th-century farmstead owned by the National Trust. At the Duddon Valley end is Cockley Beck, with a much-photographed bridge over the River Duddon.

The peculiar name of the pass comes from a nearby hill, or fell. It may derive from ancient Norse for 'stallion's ridge'. In this context, the 'stallion' is probably a personal name. Other suggested meanings include 'twisted headland' and pass of the raven'.

Near the summit of the pass is Three Shires Stone, the former junction of the counties of Lancashire, Cumberland, and Westmorland. There are at least 3 'other' Three Shire Stones in England. The stone is carved from limestone quarried at Cartmel in 1816. At that time Cartmel was in Lancashire, though it is now part of Cumbria.

The stone was carved at the prompting of the roadmaster for the Furness area, William Field. However, it was not erected until after his death in 1860. One side of the stone bears the initials WF. The opposite side is inscribed with 'Lancashire'.

At the base of the stone are cobbles radiating outward to show the course of the old county boundaries. A small stone on the ground is inscribed with a 'W' for Westmorland. There is a small National Trust car park beside the stone. The Lancashire side of the
Three Shires Stone 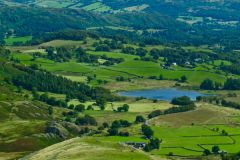 About Wrynose Pass
Address: Little Langdale, Lake District, Cumbria, England
Attraction Type: Countryside - Mountain pass
Location: On a minor road between the valleys of Eskdale and Langdale. The road is very narrow, with passing places, but the effort to drive or cycle to the summit is well worth it.
Location map
OS: NY275026
Photo Credit: David Ross and Britain Express

More self catering near Wrynose Pass >>