The Old Man of Coniston Walk 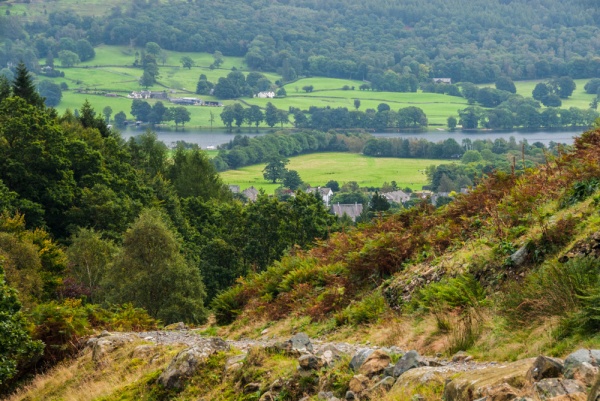 Climbing the Old Man of Coniston

The Old Man of Coniston is not a mountain, even by British standards, and falls well short of achieving 'Munro' status (peaks over 3000 feet high). The top of the Old Man reaches 2,634 feet high, or roughly 803 metres, making it the 12th highest peak in England (though its near neighbour Swirl How is almost exactly the same height).

The east and south slopes of the Old Man show evidence of centuries of slate mining activity, with abandoned mine workings and old mining gear scattered about. As of this writing, one last slate quarry is still active. 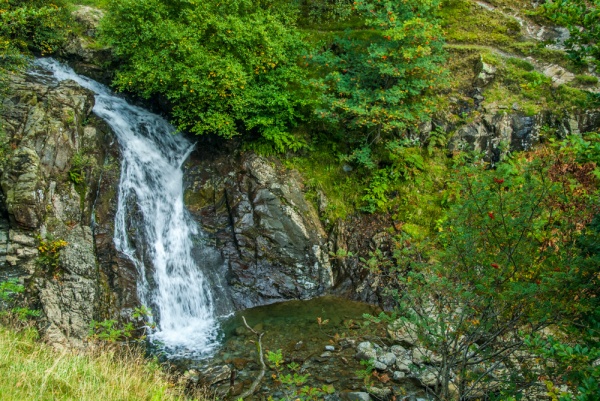 There are several well-marked trails leading to the summit cairn, but the most popular by far is the Tourist Path that starts in Coniston village and climbs the east face of the fell. On the way, the trail passes through a fascinating landscape of old mine workings, and almost past the front door of the local youth hostel, set in a stunning valley setting amid relics of industrial heritage. There is a perfect stopping place at a small tarn known as Low Water before the final, fairly steep ascent.

At the summit are a slate platform and a summit cairn, with wonderful views over the surrounding fells and east over Coniston Water.

With two children in tow, including our 7-year-old daughter for whom the word 'exercise' is an ominous term, we decided to take the Tourist Route rather than attempt the more scenic and challenging alternative from Torver. If you prefer the Torver ascent you can drive to a parking lot at the end of the paving on Walna Scar Road, just south of Coniston village.

We used a devious parental trick to convince our daughter to climb the Old Man; we told her that it was the inspiration for 'Kanchenjunga', the mythical peak in Arthur Ransome's popular Swallows and Amazons stories. Since she was an avid fan of the Arthur Ransome novels, she couldn't resist climbing in the footsteps of John, Susan, et al. 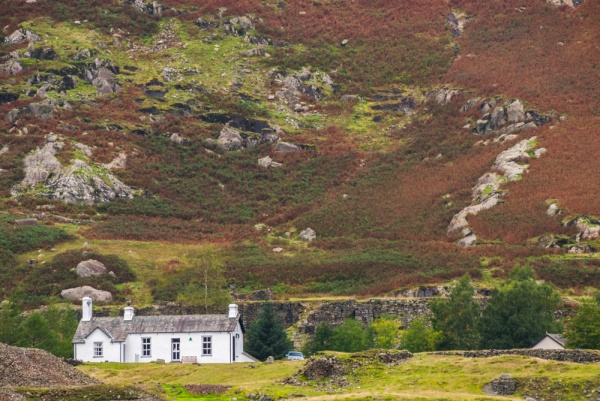 The Coniston youth hostel across the beck

The walk starts at the end of the lane running in a north-westerly direction out of the village, past the Black Bull pub. There is parking along the verge. In our case, we simply left our car in the village centre and walked the extra few hundred yards to the start of the trail at SD300979.

The trail runs along the east bank of Church Beck until it comes to Miners Bridge. Cross the bridge to the west bank and turn right, following the beck. You will soon see the youth hostel on the far side of the beck ahead of you. At the point where the trail leaves the beck you can see a lovely little series of waterfalls. 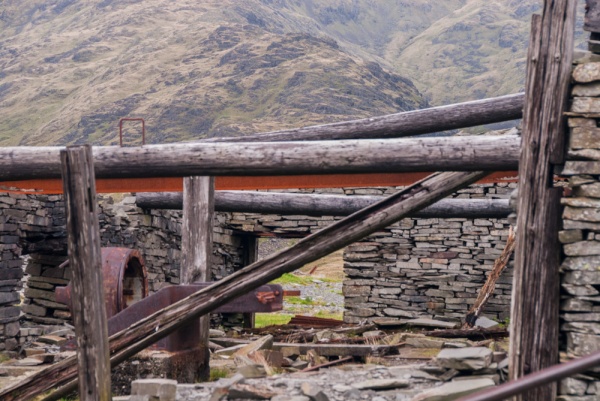 The trail leaves the beck and cuts across the lower slope of the Old Man. After about 700 metres you will come to a T junction. Turn right, and almost immediately you will see another trail to your right. Do NOT take this path; stay on the main trail to the left. 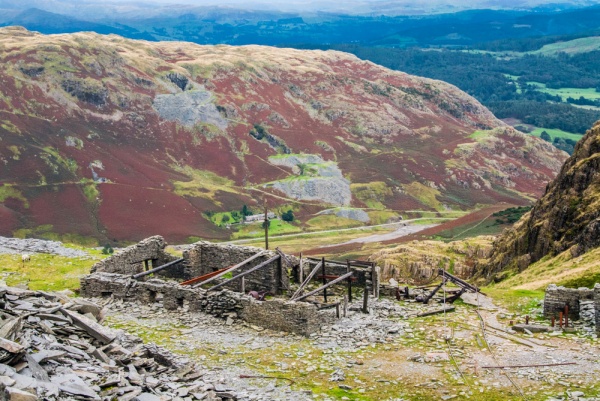 The slate mine from above

Now the route passes through the remains of a slate mine, with spoil heaps on all sides, and rusting iron cables along the track. It is fascinating to explore the old mine workings and machinery, including the ruins of an old haulage engine and tramway.

Past the slate mines you come to Low Water, a lovely tarn at the base of the final, steep climb to the summit. This is a perfect spot to stop and enjoy a bite to eat or just rest your feet by the water. 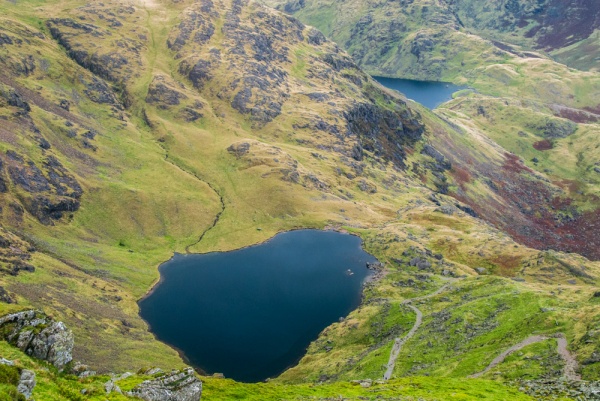 The path skirts around the left side of Low Water and immediately begins to get steeper. It was at this point on our walk that the fog descended like a blanket of wet, opaque mist, almost obscuring the trail completely. 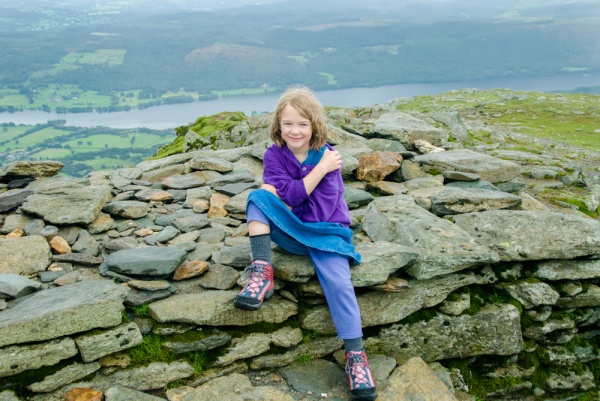 We stuck it out, though the going was slow because we couldn't see very far ahead. Thankfully there are numerous cairns along the route, giving you an extra sense of security in low visibility.

Though more difficult than the lower section of the walk, this really is quite straightforward; just follow the trail to the summit, where you will find the very obvious summit cairn and a trig point. If you want to make a circular route you can then join the Torver trail on the south face of the Old Man.

With our now very wet children, we decided to go back the way we had come. Luckily the fog lifted enough for us to thoroughly enjoy the view on the way down.

From start to finish it took our family four hours to climb the Old Man (or if you prefer, Kanchenjunga), and though we arrived back in the village rather more damp than when we started and with a few aching limbs, we had a great time. Even our youngest was smiling - not a guaranteed event after a family walk. The combination of great Lake District scenery and industrial heritage - not to mention a few literary connections, make the Old Man of Coniston climb a real treat. 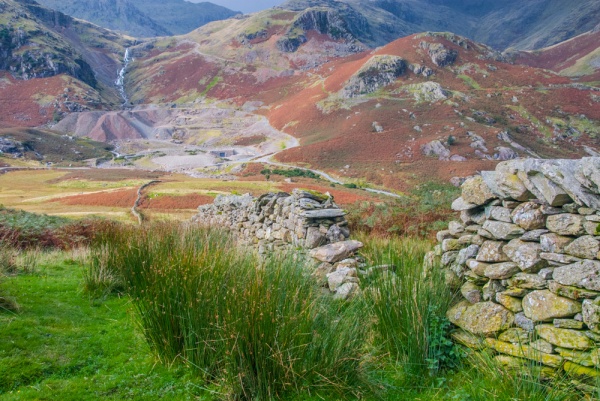 More self catering near Old Man of Coniston

More bed and breakfasts near Old Man of Coniston