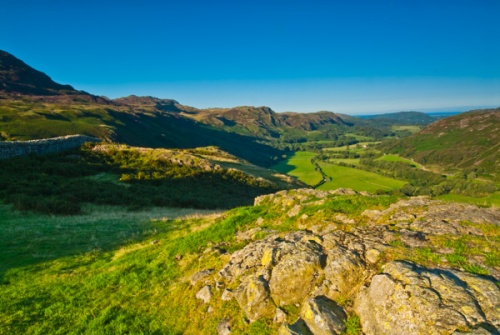 One of the most scenic of the Lakeland Passes, Hardknott has been in use since at least the Roman era. The road from Eskdale climbs to 1291 feet, making Hardknott the second highest of the Lakeland passes. Near the summit of the pass is a well preserved 2nd-century Roman fort. The way is narrow and winding, with few passing places, but the scenery is simply superb. Well worth a drive.

The fort was built in the early 2nd century to protect the route through Eskdale from Ravenglass to Ambleside. The Romans called the fort Mediobogdum and built it on a spur of relatively flat land projecting from Hardknot Fell. You can see the remains of a barracks, commandant's house, granary, parade ground, and a circular bath house outside the fort walls. The fort fell out of use in the early 3rd century.

There is a parking area at the western end of the Pass, and from there you can walk up the extremely steep road to Hardknott Roman Fort. There is also a dirt parking area for several vehicles outside the fort entrance but in summer those few places will fill up quickly.

There are no other stopping places as you go further east, past the summit of the pass, and the way is narrow and very winding until you descend to the valley floor at Cockley Beck, where the River Duddon flows under an old stone bridge. An old Roman road runs beside the River Duddon and a footpath leads up the slopes of Ulpha Fell to the north.

You can access Hardknott Pass from the west via Eskdale, along the minor road through Eskdale Green or from Ravenglass. The route from the east comes through Little Langdale, or Ambleside, and from the south the road through Ulpha and Seathwaite leads you to Cockley Beck, and the foot of the Pass.

No matter which direction you choose, you'll pass through some of the most secluded and ruggedly beautiful areas of the Lake District, an area blessedly free of traffic at all but the busiest time of summer. 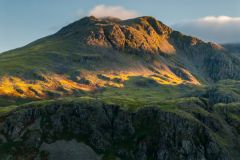 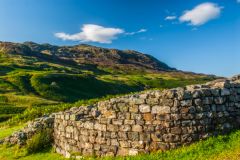 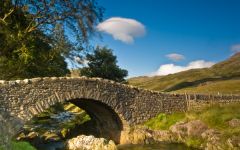 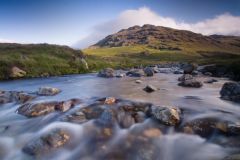 More self catering near Hardknott Pass >>