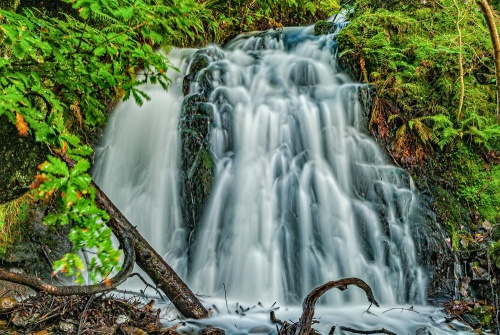 The lovely man-made lake of Tarn Hows draws thousands of visitors each year. Most come by car, along the narrow, winding lane that leads from the Coniston to Hawkshead road. But there is any way to reach Tarn Hows, a bit more energetic, but very rewarding, and one that most visitors are unaware of. That route leads along beautiful Tom Gill, a tumbling stream which features not one, but two, attractive waterfalls.

To access the trail up Tom Gill, park in the National Trust parking area on the right of the A591 a mile or so north of Coniston (before you reach Yew Tree Tarn).

The route is well signposted and leads up the side of Tom Gill through pleasant woodlands. The going is not difficult, though it can be steep in places, and can also be slippery in wet weather, so good footwear is advisable.

The trail reaches the first waterfall after only 5-10 minutes. An ascent of only a few hundred yards further brings you to the second, more impressive falls. The waterfalls along Tom Gill are every bit as impressive as more well-known falls like Stock Ghyll Force, and less visited.

Five minutes further up, past the second set of falls brings you to Tarn Hows, where you can join the circular path around the lake. You can also easily combine a walk up Tom Gill with a longer walk to Yew Dale, or simply stroll from the car park along a level path to Yew Tree Tarn, where there are further trails through the woods.

The best time to walk up Tom Gill is in the evening when the crowds have gone. If the weather is fine, the surface of Tarn Hows is like a mirror, reflecting the hills and sky - simply magical! 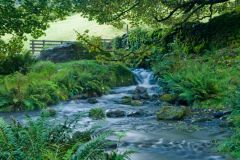 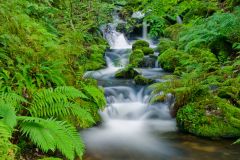 More self catering near Tom Gill