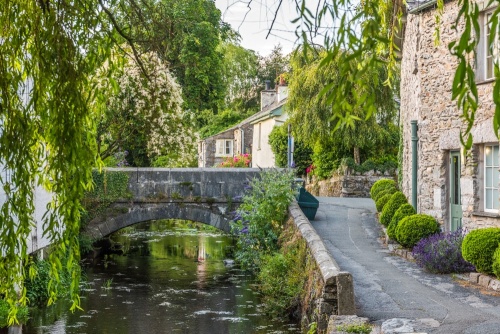 Cartmel and the River Eaa

The pretty South Lakeland village of Cartmel is one of the most picturesque villages in England and gives its name to the Cartmel Peninsula. Cartmel is perhaps most famous today for its racecourse, which draws visitors in their thousands to this small countryside location for several race meetings each year.

Outside those race days, however, Cartmel is an oasis of peace, with the slow-moving River Eaa meandering through the village, past cobbled streets lined with pretty cottages and historic inns. At times Cartmel can feel like a time capsule, which merely adds to its appeal. 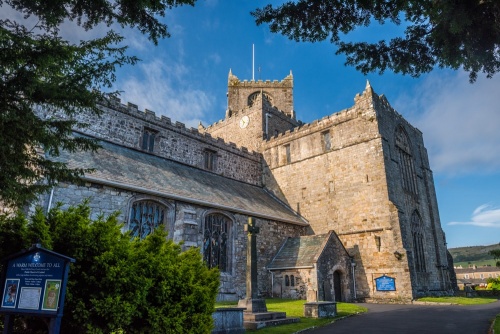 The history of Cartmel goes back to at least the 7th century. The earliest written record comes from AD 674 when King Ecgfrith of Northumbria annexed the region. King Ecgfrith gave his Cartmel lands to St Cuthbert, and they passed down to the monks of Lindisfarne until Henry II gave them to William Marshall, later to become the Earl of Pembroke. In 1188 Marshall founded Cartmel Priory as a house of Augustinian canons.

Until 1974 Cartmel was a part of Lancashire before governmental reorganisation created the new county of Cumbria. Before the present name of Cartmel became common usage, the village was known as Kirkby in Furness. 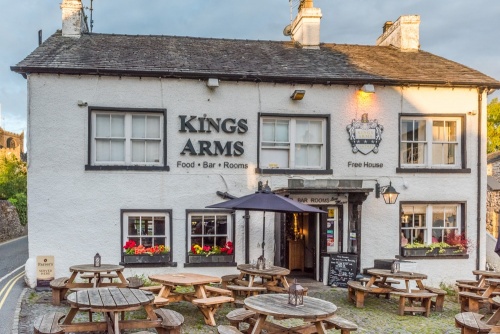 When he set up the Priory, William Marshall specified that a chapel be set aside for the villagers to worship. That simple act saved the priory church from being destroyed when Henry VIII suppressed the Priory in his Dissolution of the Monasteries.

Since the church was being used for public worship it was saved from destruction and continues today as the parish church. That is why such a small village as Cartmel has such a large and architecturally outstanding parish church.

Highlights of Cartmel Priory include the late-medieval tomb of Sir John Harrington, beautifully-carved medieval misericords, and a royal charter given by Charles I in 1641, granting former Priory estates to seven local landowners. 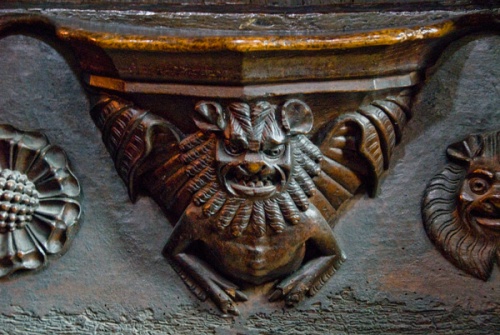 The canons of Cartmel resisted Henry's commissioners when they confiscated corn stored in the Priory's barns. As a result, they were executed for treason. The Lordship of Cartmel passed to the Duchy of Lancaster.

Look for The Cromwell Door, a wooden door pockmarked by musket balls fired by angry residents when Cromwell's soldiers used the church to stable their horses during the Civil War. 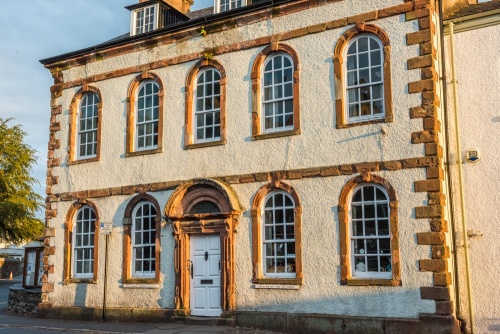 The Village Institute on The Square

Aside from the Priory church, the only vestige of Cartmel Priory to remain today is the Gatehouse on the cobbled market square. The Gatehouse was built around 1330 and had a porter's chamber on one side and a guard chamber on the other. Over the arch was a 'Great Chamber' used as a monastic court.

The fact that the Gatehouse was used to dispense justice saved it from destruction during the Dissolution of the Monasteries. Over the years it has been used as a gaol, a school, and a shop.

In the market square in front of the Gatehouse stands an 18th-century market cross, replacing an earlier medieval cross. In front of the cross is a large flat stone where fish were laid out for sale on market days. To the east of the cross stands the old village pump.

A stone's throw from the market cross stands the 18th-century village shop and tea room where you can pick up a scrumptious sticky toffee pudding. This is the 'Home of Sticky Toffee' and no visit to Cartmel is complete without stopping for a tasty treat. Cartmel Racecourse is a small national hunt racecourse on the edge of the village. The racecourse typically holds nine race days each year. The longest is a three-day meet at the end of May, with two off days in between racing days to allow visitors to enjoy exploring the Lake District National Park.

Over 20,000 visitors cram into the Cartmel Racecourse for a single day's racing, and it traditionally draws the third-largest attendance of any jumps track in England after Aintree and Cheltenham.

Please be aware that Cartmel can get ridiculously crowded on race days - as we discovered to our cost. Unless you are an avid racing fan we strongly suggest you avoid race days. But having said that, we did visit on a race day and still had a wonderful time; there were live music performers in the market square and a general buzz of people enjoying themselves in a beautiful village setting.

Cartmel is just two miles from Grange-over-Sands, which is much larger and has more facilities. Grange grew up as a seaside resort after the arrival of the railway in the 19th century and was known as the 'Torquay of the North'. Stroll the Promenade, which stretches for over a mile along the shoreline, and enjoy the Ornamental Gardens beside the picturesque 1857 railway station. Just a few miles to the west of Cartmel is the stately home of Holker Hall, the home of the Cavendish family since 1756. The present house is a superb Victorian mansion, erected after a disastrous fire in 1871 destroyed the previous house.

See superb artwork and fine furniture, and the extraordinary cantilevered grand staircase, with each baluster hand-carved by workmen on the Holker Estate. The house stands in 24 acres of outstanding gardens, wit a mix of formal garden and woodland areas.

Cartmel boats several eateries aimed at gastronomes, notably L’Enclume restaurant, and four traditional pubs for those who aren't so concerned about Michelin stars.

If you pass under the Cartmel Priory Gatehouse from the market square you come to the Cavendish Arms, an 18th-century pub with 19th-century additions. Then there is the Pig and Whistle on Aynsome Road, a traditional country pub within a short walking distance of the village centre. Facing the Cartmel Priory churchyard is the Village Institute, a striking 18th-century building of rough stone with red sandstone dressing. Next to the Institute is Bluebell Cottage, a pretty 17th-century cottage under a slate roof.

Cartmel makes regular appearances on 'Best Places to Live in the UK' lists.

Cartmel is on a minor road off the A590 between Levens and Newby Bridge. There is a large pay and display parking area near the racecourse. Parking is well signposted. It is worth noting that (as of this writing) there is no parking charge early or late in the day, so if you fancy a lovely evening stroll around a very pretty village, Cartmel is a wonderful place to come! 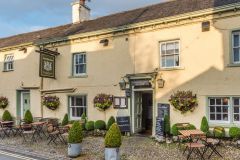 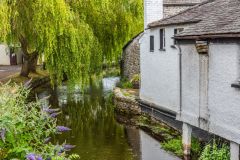 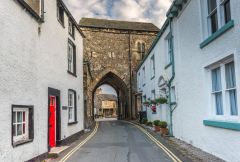 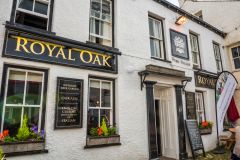 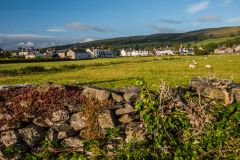 More self catering near Cartmel

More bed and breakfasts near Cartmel

Self Catering near Cartmel