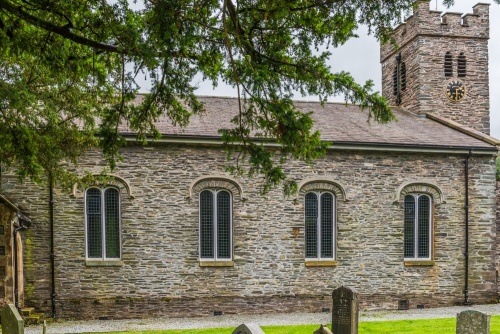 In the heart of the popular Lake District village of Coniston stands St Andrew's Church, erected in 1819 to replace an earlier Elizabethan building.

In the churchyard is the grave of the Victorian art critic and social reformer John Ruskin while in the church foyer is a memorial to Donald Campbell, the speedboat pilot who died on Coniston Water in search of a new water speed record in 1967. 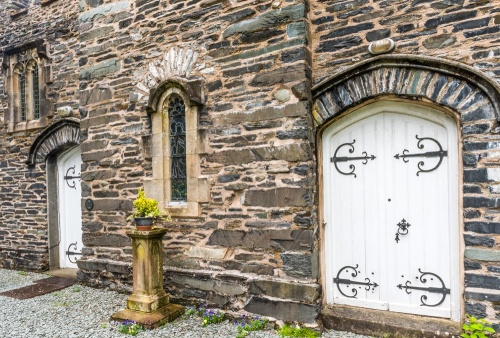 The west facade and church entrance

That 16th-century church was built by William le Fleming in 1586. The Le Fleming family have lived in Coniston since the 13th century and had their seat at Coniston Hall. That church was replaced in 1819 to a design by the architect J Matson.

The church is built of local slate with ashlar dressings and topped with a slate roof. The design is very simple, with a west tower and a four-bay nave leading to a chancel and north vestry, with a south organ loft.

Entry is through the west tower into a baptistry that leads under a gallery into the nave. The gallery was installed in 1891. A beautifully-painted early 19th-century royal coat of arms hangs on the gallery facade. 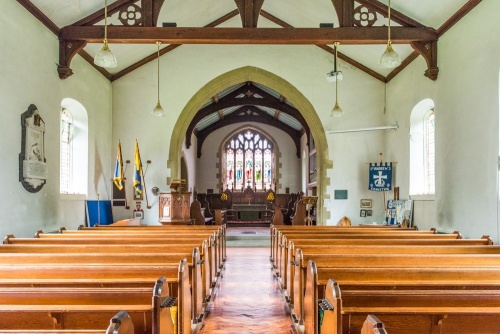 The nave roof features king and queen post trusses with decorative bracing. On the wall is a memorial plaque to Major Charles Hext of the Indian Army (Supply and Transport Corps), who died in the Ras-el-tin military hospital in Alexandria, Egypt in 1919, not from WWI combat injuries but apparently after suffering from rabies. Major Hext served in the Boer War and then on the Indian frontier. His wife Emily lived at Holywath in Coniston.

Perhaps the best architectural feature of St Andrew's Church is a stained glass window in the baptistry designed by CE Kempe in 1893. Also in the baptistry is a 19th-century octagonal alabaster font. 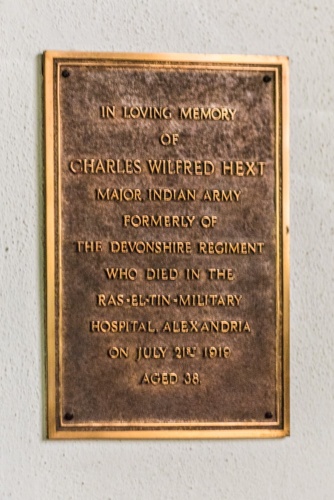 Outside the east window of the church is a large memorial to John Barratt (d 1866). Barratt was a native of Devon but lived in the Coniston area for over 30 years where he managed the copper mine and was eventually named a partner in the mining operation. Barrat was the Mines Captain, though he called himself a Mines Adventurer in the 1851 census.

Unlike many mine operators who took advantage of their workers, Barratt was a considerate manager. When the winter weather turned harsh he gave free clothing to workers, and during one particularly cold winter he gave a quarter ton of coal to every poor person in Coniston.

John Barrat's cousin William managed the Hodbarrow mines and became a Justice of the Peace. In 1893 his children gave a stained glass window in the church in memory of William and his wife. 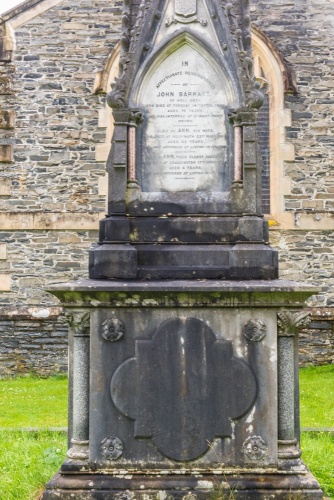 John Ruskin lived at Brantwood on the far side of Coniston Water and attended church at St Andrew's. He died at Brantwood on 20 January 1900 and was buried at the southern end of the churchyard, close to Hawkshead Road.

His grave was marked with a large Celtic cross embellished with carvings symbolic of major events in his life. Look for a scene depicting a seven-branched candlestick, a reference to Ruskin's famous architecture critique, 'The Seven Lamps of Architecture'. Another panel shows St Mark's Lion (symbolic of Ruskin's three-volume book 'The Stones of Venice'). The cross is carved from slate quarried at nearby Tilberthwaite.

To find Ruskin's grave simply walk along the north wall of the church and follow the obvious path to the north-east corner of the churchyard where you will see the Celtic cross marking Ruskin's grave flanked by two much smaller and simpler crosses. There is a sign reading 'Ruskin's Grave' on the side of the church with an arrow pointing the way. 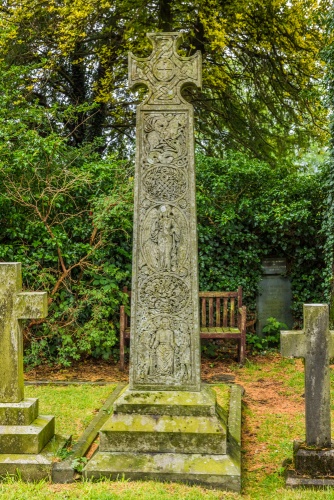 Ruskin's memorial cross was designed by WG Collingwood (1854-1932), an antiquarian, artist, writer, and professor of Fine Arts at University College, Reading. Given his background, Collingwood was very knowledgeable in authentic Celtic symbology. He studied under John Ruskin at Oxford University and settled in Gillhead, near Windermere.

WG Collingwood himself is buried near Ruskin's grave. 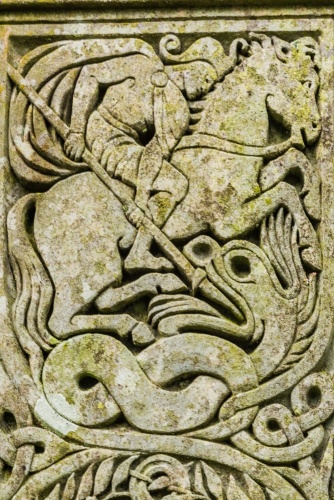 In the church foyer is a window of frosted glass commemorating Donald Malcolm Campbell CBE (1921-1967). Campbell was famous for his multiple land and water world record speed attempts. He died when his jet-powered Bluebird speedboat crashed at 300mph in a water speed record attempt off Coniston.

You can see pieces of the Bluebird in the Ruskin Museum a few hundred yards away from the church on the opposite side of Yewdale Road (the A593). Campbell was buried - not in the churchyard, for that was full by 1967 - but in the overflow burial ground off Hawkshead Old Road, a very short walk away. 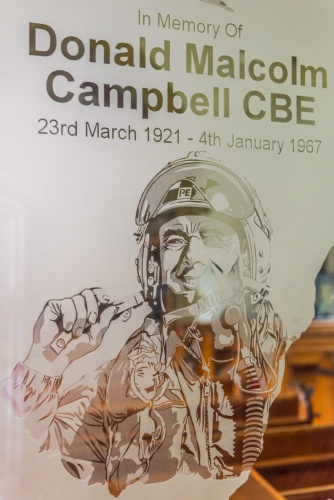 St Andrew's Church is on Yewdale Road (the B5285), just off the A593. There is no dedicated car park, but there are several pay and display visitor car parks in Coniston including a large car park further east along the B5285. The church is regularly open to visitors and was open when we visited. 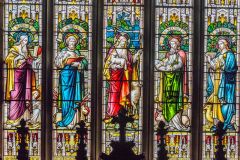 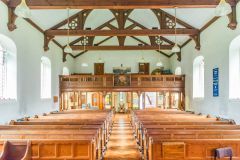 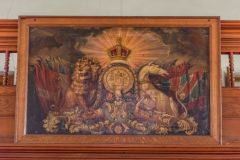