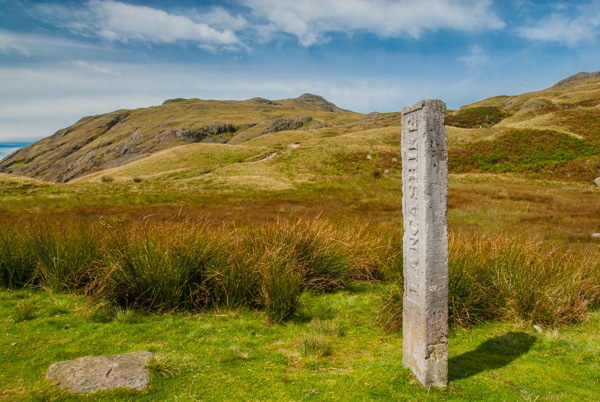 At the summit of Wrynose Pass, in the heart of the Lake District National Park, stands a carved stone marking the traditional meeting place of the old counties of Lancashire, Cumberland, and Westmorland. The summit, at 393m (1281 feet), is reached by a tortuously long, winding road from Little Langdale to the east or from Cockley Beck to the west.

Cumberland and Westmorland were combined in the government re-organisation of 1974 to form the new county of Cumbria, with its capital at Carlisle. A large portion of Lancashire north of Morecambe Bay was split off to make up a part of Cumbria.

Officials must have tried various combinations of the three county names before settling on 'Cumbria', which is presumably closer to the original Cumberland because that county made up the largest part of the newly created Cumbria.

The Three Shire Stone is made of limestone, quarried in Cartmel in 1816 for William Field, who held the post of Furness Roadmaster. At that time Cartmel and Furness were both in Lancashire. Curiously, the stone was not erected until 1860, after Field's death. 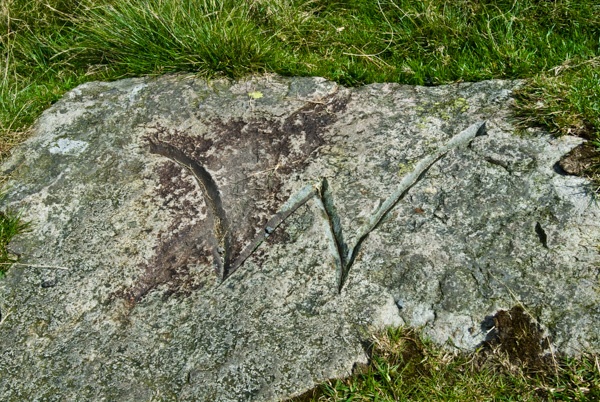 During the 20th century, the National Trust built a parking area beside the stone, which was handy for walkers exploring the radiating system of footpaths that converge on the Stone. Trails from the summit of the Pass branch off towards Pike of Blisco, Swirl How and Wetherlam.

In 1997 the stone was broken into four sections, probably as the result of an automobile accident by someone having trouble parking. Local organisations including the Friends of Real Lancashire raised money to have it restored as part of their efforts to preserve the heritage of the traditional English counties. It was restored the following year by a stonemason from Troutbeck Bridge named Gordon Greaves.

When the stone was officially re-erected and unveiled in 1998 the National Trust paid for three carved stones to be set into the turf, inscribed with the letters 'L' for Lancashire (to the south), 'C' for Cumberland (to the west), and 'W' for Westmorland (to the east). The Trust also moved their parking area slightly further away to avoid damage by someone trying to park their vehicle near the stone.

The front face of the Three Shire Stone is inscribed with the single word 'Lancashire', and the reverse of the stone is carved with the initials 'WF' and the date 1816. A small modern stone is set into the turf nearby, with an inscription explaining the stone's history. 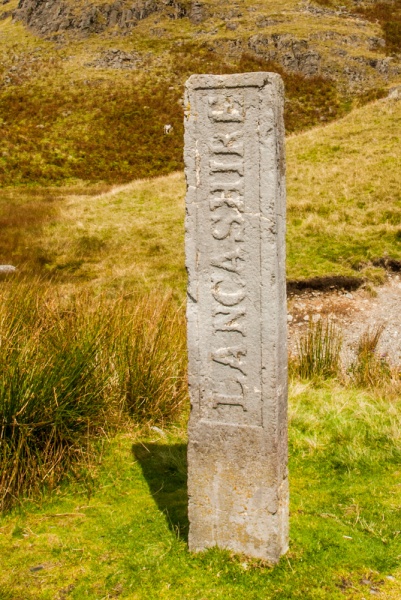 Three stones have traditionally marked the adjoining boundaries of
Cumberland, Westmorland and Lancashire on this site.

The Limestone monolith, carved in 1816, for the Furness roadmaster, William Field of Cartmel (D.1860), was set up by friends, after his death.

Repaired and re-erected by the National Trust in 1998, with local support.

Agile visitors might want to try this trick suggested in 'A Complete Guide to the English Lakes', by Harriet Martineau, published in 1855. The author suggests a way to be in three counties at once:

"Young tourists, who happen to have long limbs, may enjoy the privilege of being in three counties at once, by setting their feet on two of the three stones, and resting their hands on the third."

A short distance away from the stone is the Three Shires Inn, a 19th-century inn serving real ale and hearty food. Not surprisingly the inn is popular with walkers. 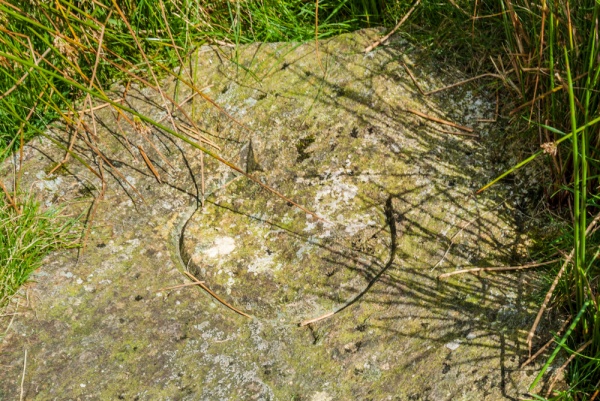