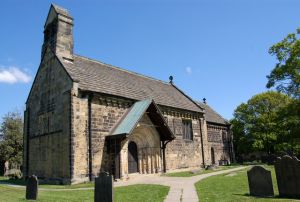 Adel
Adel is a small village on the outskirts of Leeds. The village is notable for its superlative Norman church of St John the Baptist, with an elaborately carved door and chancel arch.

The church dates to around 1152, on the site of an earlier Saxon building, and is mentioned in the Domesday Book. The church has hardly been altered since it was built, with the exception of a small Victorian bell turret. Though small, St John's is an almost perfect example of a Norman church, with a chancel arch decorated with a series of grotesque beak-head carvings.

A mile outside the village is the site of a Roman camp and villa, situated on the course of a Roman road between Ilkley and Tadcaster. Roman finds are displayed in a small museum near the church. Carved Romano-British stones are displayed in the Leeds City Museum, as are Saxon carved stones found in the church foundations during restoration work in 1864.

Near the church is York Gate, a farmhouse with a landscape garden which is regularly open to the public.

Just 4 miles away is the stately home of Harewood House.

More self catering near Adel >>

More bed and breakfasts near Adel >>