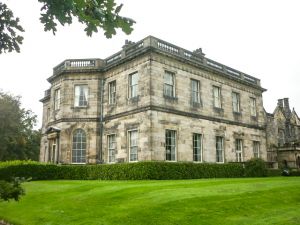 The south aspect of Farnley Hall
Farnley Hall is a late 16th-century house with later Georgian additions. The Hall boasts a collection of paintings by JMW Turner, who was a frequent visitor to the house. There is also a sizeable collection of artefacts associated with Oliver Cromwell. The owners of Farnley Hall are the Fawkes family, who are distantly related to Guy Fawkes.

History
The Fawkes family have been connected with the Otley area since at least the 13th century. A record of 1378 mentions 'John Ffaukes and his wife and their villa of ffarnlay'. We do not know exactly where this 'villa' stood, but it may be on the site now occupied by the older wing of the current house.

Sometime around the turn of the 17th century a new house was built, now called Old Farnley Hall. The last owner of Old Farnley Hall was Francis Fawkes, a rich widower with no direct heirs. When Francis died in 1786 he left the house to a distant relative, Walter Hawksworth, on condition that Hawksworth adopt the Fawkes name. Hawksworth did just that and took possession of the Hall.

One of the first things he did was call in fashionable architect John Carr of York to extend the old house with a new reception wing in Georgian style. The work had not even been finished when Walter Beaumont/Fawkes died, and the house passed to his son, also named Walter.

The second Walter also took the surname of Fawkes and was known as Walter Ramsden Fawkes. It was the second Walter Fawkes who finished the Hall as we see it today, furnished it with beautiful Georgian furniture, and filled it with fine art. 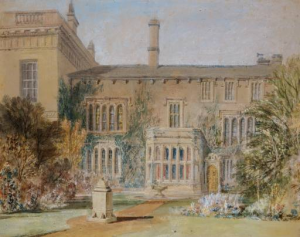 Fawkes was a good friend of artist JMW Turner, who visited Farnley Hall again and again over the course of several decades. In fact, Farnley could be said to have been Turner's second home from 1806-1824.

Turner was inspired by the landscape of Wharfedale and produced a prodigious amount of artwork based on his extended stays here. Walter Ramsden Fawkes owned some 250 Turner watercolours and 6 large paintings, though some of these were sold off to pay family debts in 1890.

Another frequent visitor to Farnley was John Ruskin, author, philosopher, and critic. Ruskin said of Farnley Hall and its links to Turner, 'there is nothing like it in the world – a place where a great genius has been loved and appreciated'.

It may be easier to think of Farnley Hall as two distinct but linked houses. There is the old 17th-century wing, or Old Farnley Hall, and the late 18th-century house, designed by John Carr.

The Hall was used as a maternity hospital in WWII and was restored in the early 21st century. It is still owned by the Fawkes family and is open for pre-booked group tours from April-September.

Note
Do not mistake this Farnley Hall with the house of the same name near Leeds!

More self catering near Farnley Hall >>