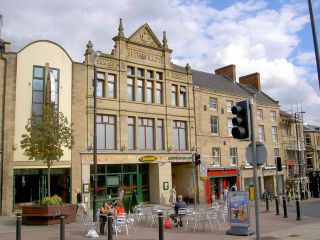 Barnsley
A large town in southern Yorkshire, Barnsley was for many years a centre of the coal mining industry. Daniel Defoe, writing in the 17th century, called it 'Black Barnsley'. The Barnsley Metropolitan Borough Council operates Cannon Hall Museum, a 17th-century country house which holds a museum of fine and decorative arts.

Cannon Hall is set in 70 acres of landscape gardens and parkland. The Hall is home to the Regimental Museum of the 13th/18th Royal Hussars (Queen Mary’s Own) and the Light Dragoons. Visitors can explore a series of ornate state rooms in neo-classical style, with 18th-century furniture by such masters as Robert Adam and Thomas Chippendale.

Near the house is a walled garden with a large collection of historic pear trees. One highlight in the parkland is Fairyland, a picturesque, whimsical place built around a pond in the 1870s, using arches and other architectural features from nearby redundant churches to create a fantasy hideaway.

Barnsley is famous for its markets - if shopping is in your blood, then you've arrived in heaven. There are a large number of farm shops and regular food markets.

The town was first mentioned in the Domesday Book of 1086 when it was called Berneslai. During the 17th century, it developed into an important transportation centre, well-placed for traffic to London, Leeds, and Sheffield.

The town grew as a result of the traffic, and later developed into a centre for linen weaving, but Barnsley's history is perhaps most deeply rooted in the Industrial Revolution. Coal-mining and glass-making were at the heart of Barnsley's growth into an important 19th-century town. Learn about Barnsley's history at the Experience Barnsley Museum.

The 'lost gardens of Barnsley' surround this ornate stately home, including a restored 19th-century conservatory. Within the gardens are a Union Jack Garden, and one of the oldest purpose-built lawns in England. The formal gardens are set within a larger 500-acre park, with trails for exploring the countryside.

This historic 17th-century mill stands at the heart of a 240-acre country park. Tour the working mill and follow the milling process from the arrival of grain sacks to the finished flour, which you can purchase in the Mill shop. Footpaths lead from the mill throughout the park and take in a 60-acre reservoir.

Just outside Barnsley is the conservation village of Elsecar, where the Elsecar Heritage Centre is set in a remarkable landscape of industrial heritage, including a Heritage Railway, restored ironworks, and colliery. There are walks along the Deane and Dove Canal, regular steam and diesel train rides, and a regular programme of special heritage-oriented events.

More self catering near Barnsley >>

More bed and breakfasts near Barnsley >>